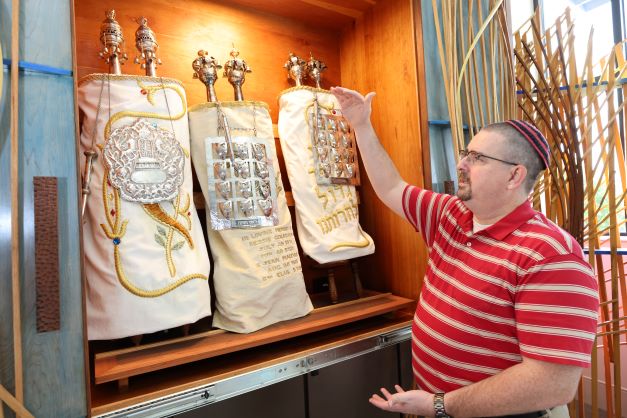 A local synagogue will celebrate the holiest days of the Jewish calendar with a new spiritual leader for the first time in more than a decade.

Rabbi Erin Boxt began his duties at Temple Beth Shalom July 1 and will lead his new congregants during the High Holy Days, beginning with Rosh Hashana Sunday, Sept. 25, and concluding with Yom Kippur on Oct. 4.

The South Carolina native replaced Israeli native Rabbi Ze’ev Harari, who retired in June after leading the Temple for 11 years.

“I have a great congregation, my kids attend great schools, and we like the warmth,” said Boxt.

Temple members and Jews across the globe will observe Rosh Hashana, the Jewish New Year, by eating traditional sweet foods including apples dipped in honey, and round challah bread. The blowing of the Shofar or ram’s horn marks the beginning of the religious holiday, he said.

“The apples and honey symbolize the sweetness of the New Year,” said Boxt, who has three children with his wife, Batya, daughters Carlie, age 16 and Danika, who is 7 and son Akivah, age 6.

“The round loaves of challah represent the circle or cycle of life,” he said.

Based on the Jewish, “Luni-Solar” calendar, established by cycles of the moon and sun, Rosh Hashana, or Yom Teruah, is observed by Jews on the first day of Tishri, the seventh month of the Jewish calendar.

The Days of Awe, the 10 days between the Jewish New Year and Yom Kippur or Day of Atonement, are a time for Jews to look inward and reflect on the past year, said Boxt, who received his bachelor’s degree in psychology from the University of Georgia in 1999. He was ordained as a rabbi in 2012 after five years of rabbinical study through Hebrew Union College.

“It’s a process of repentance and reflection and thinking about what we can do in the New Year to better ourselves,” he said. Boxt previously served as rabbi at Temple Beth El in Knoxville, Tennessee from 2017 until coming to Ocala, and formerly served as the associate rabbi at Temple Kol Emeth in Marietta, Georgia.

Temple Beth Shalom, part of the Ocala Tree of Life Sanctuary at 6140 SW 78th Road, will have a first night of Rosh Hashana service beginning at 7 p.m. Sept. 25. All Jewish holidays begin at sundown.

A Day One Service will take place at 10 a.m. Sept. 26, followed by a Tashlich ceremony during which Temple members will throw fish pellets into flowing water to symbolize the casting away of transgressions of the previous year.

“It’s the tossing away of sins in the New Year,” said Boxt. “We used to use breadcrumbs, but it wasn’t good for the wildlife.”

A Yom Kipper or Day of Atonement service, the most holy of days of the Jewish year, will begin at 7 p.m. Oct. 4 at the temple. Yom Kippur services will continue at 10 a.m. and 1 p.m. on Oct. 5, followed by a healing service at 3 p.m.

There is prayer and fasting and atoning for one’s sins during Yom Kippur. Jews believe that during the High Holy Days God decides who should live and who should die in the coming year. It is a time to make peace with those you may have offended and ask for their forgiveness.

“The Day of Atonement is the day when we are the most vulnerable; we are standing before God,” said Boxt. “We are standing at the gates of righteousness and repentance and begging God to forgive us and allow us through the gate and into the New Year.”

“You hope everything you’ve done before allows you to make it into the New Year,” he said.

Jews traditionally fast from the first day of Yom Kippur until the last service the following day, and Temple Beth Sholom will host a break-the-fast meal after its closing memorial service for the dead at 4 p.m. Oct. 5

Boxt said his family has enjoyed living in Ocala so far, except for one thing: the relentless storms over the past few months.

“We have had a lot of rain and thunderstorms; we’re not used to that,” he said.