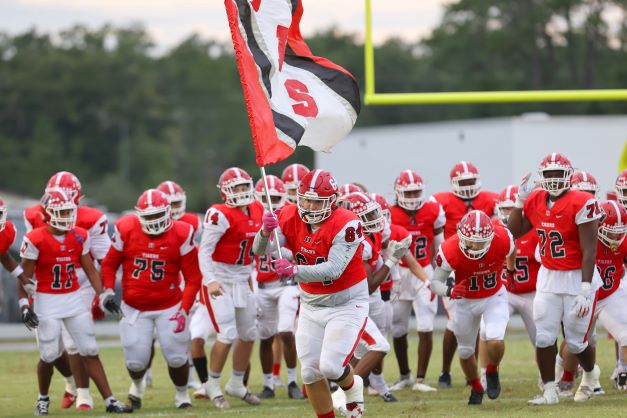 The Tigers and Wildcats are longtime county rivals but did not play each other on the gridiron for a long time in the 2000s and 2010s.

The rivalry was reignited in 2019 and both teams squared off at Forest on Friday night with first-year head coaches leading the way. The Tigers, with a 1-2 record, were coming off a heartbreaking overtime loss to Vanguard and Forest was riding high after knocking off Belleview for their first win of the season last week.

The game had a fast start as Dunnellon freshman quarterback Dylan Curry connected with sophomore wide receiver Jayvyn Fraziars for a 12-yard touchdown, the extra point was no good and Dunnellon carried a 6-0 lead.

On the first drive of the second quarter, Curry hooked up with junior wide receiver Lacodrick Brown for a 60-yard touchdown to extend the lead to 12-0. It was a breakout game for Curry as it was the first time he threw for multiple touchdowns and Tigers head coach Thomas Sutton was proud of his effort and knows he can continue to improve.

“He had a good night, obviously there is going to be several plays that he wishes he could have back, but he will learn from those and get better. I’m proud of him, he’s a worker and I know he will be ready to go on Monday.,” he said.

Forest would claw their way back into the game on a 40-yard touchdown pass from junior quarterback Vimel Poole Jr to sophomore wide receiver DeAnthony Sancho, a missed extra point kept the deficit at 12-6 going into halftime.

Wildcats head coach Eoghan Cullen is excited about the potential of Sancho but wants to see more consistency.

“He has tremendous potential, but he also had some drops tonight along with the touchdown. He’s still young and doesn’t know how good he could be yet but I’m just excited to continue to watch him improve every week.,” he said.

The special teams struggle reared its ugly head for the Wildcats as another high snap on a punt led to a safety and an easy two points for the Tigers. Poole would answer with a rushing touchdown to get the score to 14-12.

The Tiger defense stepped up in a big way with just over 11 minutes left to go in the game when junior Chris Henry intercepted Poole and returned it 65 yards for a touchdown to extend the lead to 20-12.

After a forced fumble by Wildcats senior defensive end Tae Floyd, the offense drove down the field and scored via another rushing touchdown from Poole, he would finish with over 200 total yards and three total touchdowns on the night. With 4:30 left in the game, Forest attempted an onside kick and Dunnellon recovered it, which put the Wildcats defense in a tough spot. The group would force a punt and Cullen was proud of the way his defense performed under pressure and continues to do so each week despite tough situations.

“Dunnellon could have put the nail in the coffin there and our defense stepped up big inside the red zone and got a huge stop. I’m just super proud of those guys and they keep us in these games.,” he said.

Forest would get an opportunity to take the lead, but the Dunnellon defense stood tall and forced a turnover on downs to seal the 20-18 win.

Multiple times in the game the offense put the Tigers defense in an unfavorable scenario that required them to step up and get a stop. The message from Sutton and his staff to the defense is fight and never let go of the rope.

“Our defense, we tell them all the time, I don’t care what situation it is, your job is to stop them. We put them in tough situations tonight and I was proud of the way they responded and got the job done.,” he said.

The result may not have been what Cullen and his team wanted but said he knows that will continue to work and improve each week.

The Wildcats fall to 1-3 on the season and will visit South Lake, their first district game of the season.

“Just continue to focus on the process and getting better every week. Continuing to do what we need to do on both sides of the ball.,” Cullen said when asked about the importance carrying some momentum into to district play.

For Sutton and his Tigers, they are now 2-2 on the season and will also start district play next week when they host Hernando.

“Our first goal is to win a district championship. You can’t win the championship without winning the first district game. So, we’ll turn our focus to Hernando tomorrow and see how we can have some success next Friday.,” he said.