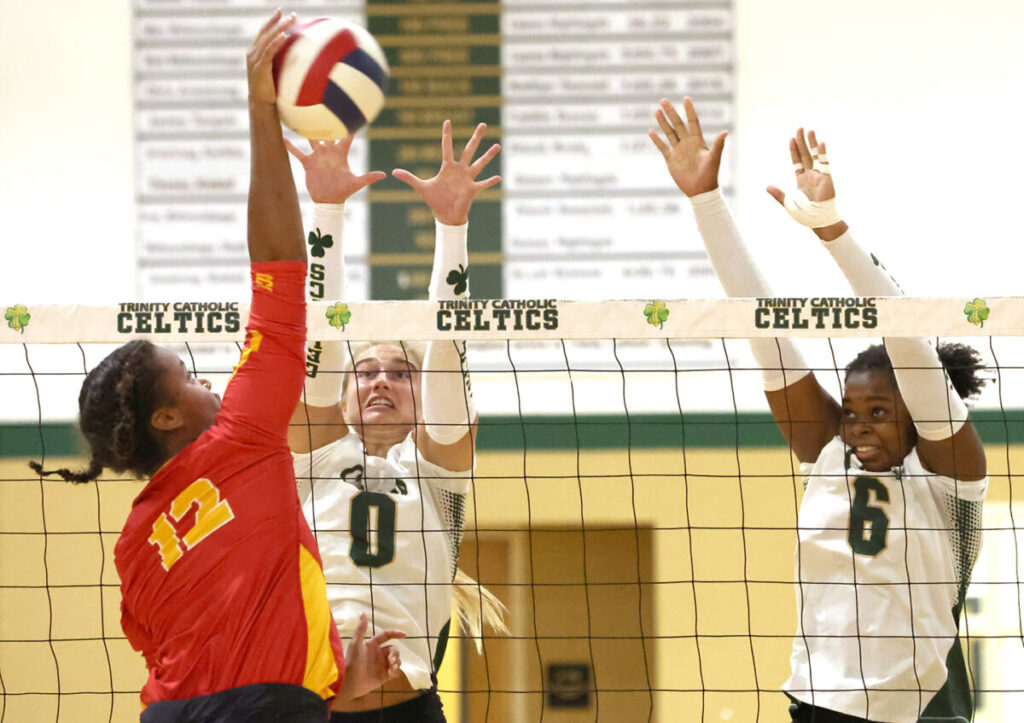 Playing a tough regular season schedule helps prepare the Trinity Catholic volleyball team for the rigors of postseason play. It also helps the Celtics get a first-hand look at their competition from around the state.
That was case in Thursday night’s clash, as Trinity Catholic hosted a very talented Clearwater Central Catholic team, and with both squads residing in Class 3A, a potential playoff opponent.
Trinity Catholic showed a lot of grit and determination by coming from behind in outlasting Clearwater Central Catholic in four entertaining sets by scores of 28-26, 25-21, 16-25 and 25-22.
The loss dropped the Marauders to 8-5 overall, while the hard-fought victory improved the Celtics to 8-3 on the season.
“We knew when we invited Clearwater Central Catholic they were a good team and that it was going to be a good match,” said Trinity Catholic coach Jeff Reavis. “We’re old but we’re young in some places. So that mentality of understanding how to close and finish and how important it is to send a message is a process and something we’re working on.”
Falling behind against quality competition is not something Trinity Catholic wants to make a habit of doing.
“We talked about it during the week and again today about starting a match better,” coach Reavis said. “Right now we can’t seem to do it and we’re going to continue to work on that.”
The first set was tight throughout and the score was tied 10 times, the last at 26 all, before a kill shot by senior outside hitter Kiana Laborde and a perfectly placed dink shot by senior outside hitter Ameila Fitzpatrick gave the Celtics the 28-26 victory.
The second set was a carbon copy of the first set as neither team could string points together. Clearwater Central Catholic took a 21-19 lead as senior Brooke Green had four of her team-high 14 kills.
Trinity Catholic answered as junior middle hitter Elayna Johnson had two kills, Laborde added three of her match-high 27 kills, and a spike attempt by the Marauders went into the net to put the Celtics up 2-0.
“Kiana was a warrior tonight,” coach Reavis said. “It’s great to have her as part of our team because she does so many things that no one talks about.”
Clearwater Central Catholic shook off the two close losses and came out firing on all cylinders in the third set and jumped out to a 9-1 lead as Green and Taylor Bedinghaus took turns finding holes in the Trinity Catholic defense.
The Celtics got as close as 15-10 before the Marauders went back on the attack and cruised to the 25-16 win to close within 2-1.
Trinity Catholic fell behind in the final set by a score of 4-1, but rallied to tie the score at 18 all on a beautiful combination block of a Clearwater Central Catholic spike by senior Emily Hirst and Johnson.
A kill shot by Avery Campise, who finished with 12 on the night, and a cross-court spike by Laborde gave the Celtics a 20-18 lead and the Marauders called a time out.
Trinity Catholic stayed focused and finished with a flourish as Johnson drilled a pair of winners, Laborde hammered a kill shot down the line and a block by Fitzpatrick and Johnson put the Celtics on match point.
A long rally ensued before a perfectly place dink shot by Fitzpatrick, who also had a match-high 26 assists, found the floor to give the set and the match to Trinity Catholic.
“This was a good match and there are a lot of great teams in our class in the state,” coach Reavis said. “This was good for us because we need to see and play these teams.”
Trinity Catholic is back in action on Tuesday night with an away match at Buchholz (Gainesville). The Celtics host Bishop Moore on Thursday night. Bishop Moore (Orlando) has an excellent volleyball program and should provide Trinity Catholic with a stern test.