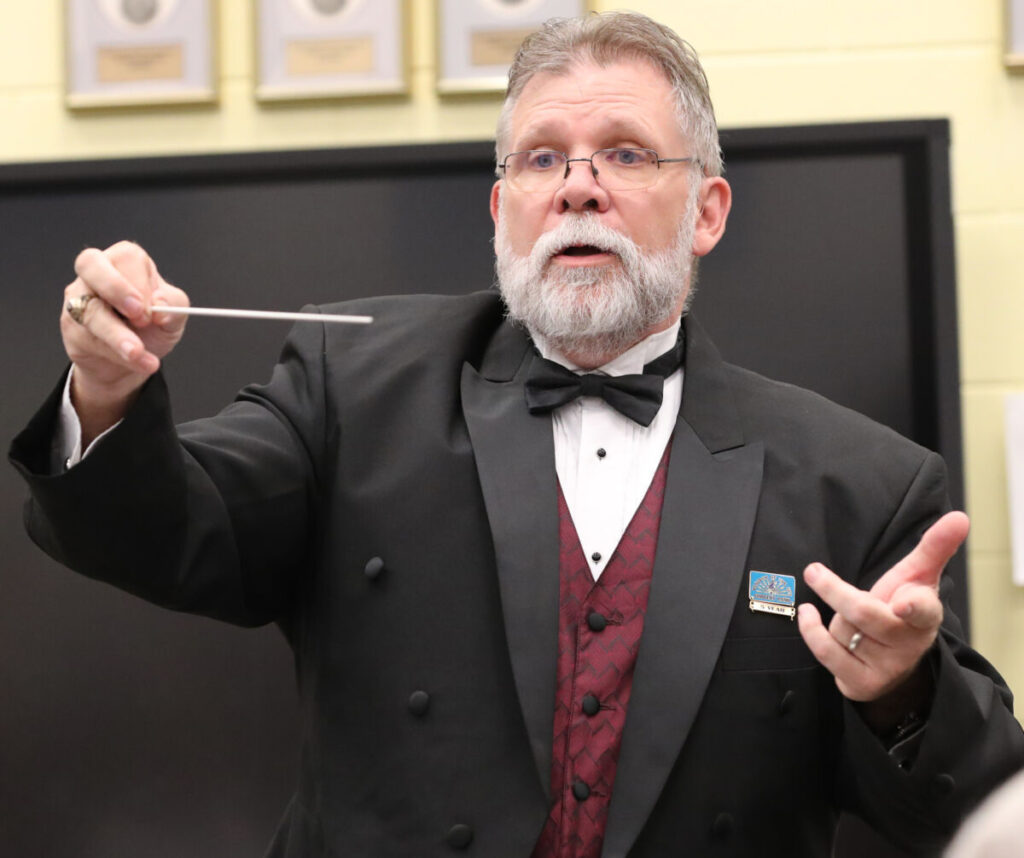 David Fritz, the new director of the Kingdom of the Sun Concert Band, conducts the band during a rehearsal at Howard Middle School in Ocala, Fla. on Monday, Sept. 12, 2022. The Kingdom of the Sun Concert Band will begin their season with two concerts, one on Saturday, Sept. 17 at 2 p.m. and another on Sunday, Sept. 18 at 3 p.m., which are both being held in the auditorium at Marion Technical Institute. The September concert theme is “Who’s Your Hero” and will honor first responders, teachers, members of the military, as well as some heroes from the big screen. David Fritz takes over as the band’s leader for longtime band leader Les Muncaster. [Bruce Ackerman/Ocala Gazette] 2022.

David Fritz loves bringing musical notes to life, and for 37 years as a local middle and high school band director, he did just that.

The Toms River, New Jersey native retired his baton in May 2019 after leading the Fort King Middle School Falcon Band for the last 17 years of his decades-long career. Fritz moved to Ocala with his parents in 1973 and in 1981 earned his music education degree from the University of Florida, where he played in the Fightin’ Gator Marching Band.

“It was exciting,’’ Fritz said of his teaching career. “I made lots of good friends and had wonderful connections with students over the years. It’s certainly not boring when you’re dealing with kids.”

But Fritz’s measure of rest was short-lived.

In April, the 64-year-old became the director of the Kingdom of the Sun Concert Band, pulling out his baton once again to lead the 90-member community band comprised of high school students, professional musicians, current and retired music educators, and others who play as a hobby.

“It’s a true community band with a wide range of members,” said Fritz, who took over as director following the retirement of long-time conductor Les Muncaster in March. Muncaster and his wife, Marcia, who was the band’s featured vocalist for years, now serve as its veteran liaisons. “Our youngest player is a high school freshman and our oldest is in their mid-90s.”

The band has a wide array of clarinet, flute, saxophone, French horn, trumpet, trombone, and tuba players, as well as a bassoonist, bass guitarist and percussionists – and all take their respective roles in the band seriously, he said.

The trumpet section, with 14 trumpeters, is the band’s largest.

“It’s musical creativity that you get to share with as many other people as there are in the band,” said Fritz, who has five children and four grandchildren with his wife, Donna, a neonatal nurse at AdventHealth Ocala.

“It’s a team effort and everyone plays their part and pulls their own weight,’’ he said. “We all get to bring to life what is dry notes on a page.”

The Kingdom of the Sun band, founded in March 1990 with 35 charter members and first known as the Mid-Florida Symphonic Band, will kick-off its highly anticipated concert season this weekend with a program honoring first responders, teachers, and the military.

The “Who’s Your Hero?” concert will take place at 2 p.m. Saturday and at 3 p.m. Sunday (Sept. 17-18) in the auditorium of Marion Technical Institute, 1614 E. Fort King St., Ocala. All concerts are free and open to the public, but the nonprofit band accepts donations at the door.

Song selections will include, “First Responders,” a march dedicated to police, firefighters  and other first responders; the very dramatic, “Where Valor Proudly Sleeps,” based on a poem, as well as some music from James Bond and Superman movies along with a medley dubbed, “Who’s That Masked Man?” featuring a mixture of songs from Spiderman and Zorro flicks.

“It’s a lot of fun music, but we also have dramatic music including the Navy hymn,” said Fritz, a trombone player who joined the band seven years ago after meeting Muncaster and served as its assistant director before taking the helm. “We will end it with Andrew Lloyd Webber’s, “Jesus Christ Superstar.”

The group’s second concert of the season, its annual salute to veterans, will take place at 7 p.m. Sunday, Nov. 6 at Veterans Memorial Park, 2601 E. Fort King St., Ocala. The “Veterans Light the Stars” concert will feature an array of favorite military-themed songs.

“It’s been a well-attended concert and a good way to show appreciation for all our veterans have done,” he said. The program will conclude with a fireworks display.

Meanwhile, the band’s annual Christmas concert, a holiday tradition for many families in the area, will be held Dec. 3 at 2 p.m. and Dec. 4 at 3 p.m at Marion Technical College, 1014 SW Seventh Road, and will include seasonal favorites and music from the movie “Home Alone” to go along with the concert’s theme, “Tis the Season.” Santa and Mrs. Claus will be in attendance, too.

It’s annual spring concert, “Fanfares and Favorites,” will take place in early March and will showcase tunes and songs from Broadway shows and requests from audience members.

“’Fiddler on the Roof” will likely be in there,” said Fritz.

The band will also perform at Light Up Ocala Saturday, Nov. 19 in downtown Ocala he said, with the band taking the stage around 4:30 p.m. on Citizens Circle.

Fritz said he enjoyed playing in the band but being director of Kingdom of the Sun struck a whole new chord with him.

“I enjoyed the trombone section but standing in front of the band is a whole different world,” said Fritz, who recalled directing the band during a particularly dramatic song at a recent concert.

“We were performing “Pines of Rome,” and I was so touched by the mood and emotions of the song,” he said. “It was a real honor and exciting to experience.”

Since its inception nearly 33 years ago, the band has grown from less than three dozen members to nearly 100 and has become a beloved part of the community with a loyal following.

As for the future, Fritz said he doesn’t plan to make any changes to Muncaster’s way of directing the band.

“Les had a formula for the concerts and it worked wonderfully, so I’m trying to follow it. He had music and major works in the program that would challenge the band, but he also had works that would be recognizable to audiences and that people would be able to relate to,” Fritz said.

“It was a formula that worked then and works now,” he added.