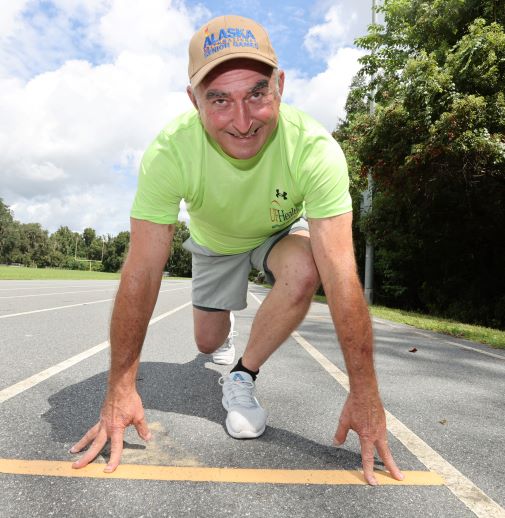 Cecil Cordell, 65, poses for a photo on the track at Brick City Adventure Park in Ocala, Fla. on Monday, Sept. 12, 2022. The senior athlete is still going strong and competing in a lot of track and field events. [Bruce Ackerman/Ocala Gazette] 2022.

For most people, being competitive in athletic events stops at a certain age because health issues take over and bring careers to an end.

Cecil Cordell is not your average person and at 65 years old, he shows no signs of slowing down despite age and mounting health issues. With upcoming hip replacement surgery (October 6th), Cordell will be competing in the 21st annual Gainesville Senior Games on September 18th.

To understand Cordell and his significance to the world, you have to go back to the beginning and appreciate his seven-decade journey.

Cordell was born in Chicago in 1957, him and his family moved to Miami when he was six years old. During his time in Miami, Cordell got his first taste of sports and was the goalkeeper for a state championship AAU team at eight years old. He followed up with a national championship in the 4×100 boys relay race.

When Cordell was 10, the family moved again and his father’s plan was to move to Gainesville but on their trip north, a gas station attendant told his father that it was a college town and Ocala would be better to raise his family.

“We stopped for gas at like nine o’clock at night on our way to Gainesville. We had a U-Haul trailer with my mom, sister and I, the gas station attendant said we should stay in Ocala. So that’s how we settled in Ocala.,” he said.

Cordell would attend Vanguard High School and legendary high school basketball coach Jim Haley became a huge influence on his life. Another person who had major influence on Cordell as a teen was Raymond Meyers, an FFA teacher at Vanguard.

“He was very instrumental in getting me my education and keeping me going.,” he said. 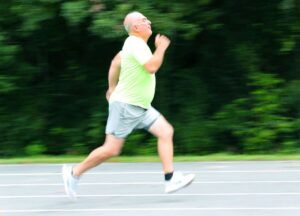 Cecil Cordell, 65, runs on the track at Brick City Adventure Park in Ocala, Fla. on Monday, Sept. 12, 2022. The senior athlete is still going strong and competing in a lot of track and field events. [Bruce Ackerman/Ocala Gazette] 2022.

Cordell was faced with serious adversity as a teenager and had to learn how to grow up on his own at a much earlier age than most. Trouble at home led to him making the decision to go out on his own at 14 years old by going from house to house with family friends while going to high school.

He credits that decision and learning how to depend on himself as a key factor towards being so determined in his adulthood and not letting any adversity affect him.

He added, “Living, going to school every day, working, having to work to survive and thinking on your own without your mom and a dad. That was my decision, and I don’t regret any of it.”

After graduating high school, Cordell moved on to work for Fleetwood Homes, a mobile home manufacturing company. The lessons he learned from the industry and his master’s degree in structural engineering led to him eventually opening and running his own business, C-Land manufacturing.

Cordell had two sons, Brad and Kyle, from his first marriage. He is currently married and has a nine-year-old son. One of his fondest memories as a parent was coaching his sons in little league before they moved up to high school. He also has an adopted son, Kyle McKelvey, the three older sons all live in Ocala and run successful businesses.

During the 1980s and 1990s, Cordell’s athletic career centered around softball and alongside his sons, won multiple city championships in the Ocala league. Despite the success in softball, Cordell wanted to go in a new direction and started focusing on individual sports such as track & field.

“I like the fact that I depend on me and me only. I’m really tough on myself when it comes to winning and losing.,” he said.

In 2014, Cordell decided to start competing in senior games events. Since he started, he has competed in approximately 212 events, during that time he has only missed out on the podium four times.

Cordell credits Daniel Medley, known as Coach Miami, as the person who vaulted his performances after training with him.

“He’s the one who trains me and has got me to this point in time in my track and field career.,”

Medley, 42, has worked under legendary coaches such as Loren Seagrave and Rana Reider, both have had athletes compete in the world championships and Olympics. Medley trains top high-school athletes but found himself in a unique position as the coach of Cordell, the only adult he currently trains.

“We break things down and I designed a special program for him that fits him for his age to make sure he’s able to stay competitive.,” he said. The chance to coach Cordell has opened his eyes to the determination and mental toughness he has and how outstanding of a competitor he is.

“He’s a special guy. A guy walked up to me and recognized me as his coach and his story is out there but what a lot of them don’t realize is that he’s a special individual. He’s a big inspiration and he’s a special person and that’s the reason that he has the results he has accomplished.,” Medley said.

In a twist of irony with his connection to Gainesville, Cordell now lives in the city and has multiple doctors at UF Health that are instrumental to keeping him in top shape physically. His surgery next month will be performed at UF Health by Kevin R. Vincent. Cordell said he would not be where he is today without his team of medical professionals. His primary care doctor, Sid Clevinger, who has been his best friend for 38 years, always feels nervous whenever Cordell goes out to compete.

Combined with the need for a hip replacement, Cordell has carpal tunnel in his left wrist, a torn rotator cuff and spinal stenosis.

Cordell said he wanted to make sure he showed his appreciation towards these medical professionals: 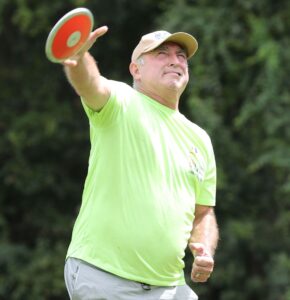 Cecil Cordell, 65, throws the discus at Brick City Adventure Park in Ocala, Fla. on Monday, Sept. 12, 2022. The senior athlete is still going strong and competing in a lot of track and field events. [Bruce Ackerman/Ocala Gazette] 2022.

Between competing in senior games events and running his manufacturing company, Cordell has teamed up with Clevinger’s nephew, William, producer of Cut Throat City, the top movie on Netflix for 14 weeks in 2020. Clevinger, Cordell and others have come together to create The Big Picture, which is an entertainment collective aimed towards “producing cutting-edge film, tv, and sports projects while also creating first-look opportunities and mentorship for young athletes throughout their careers. The collective will assist its athletes with representation in professional sports, Name, Image and Likeness (NIL) and a united focused vision creating opportunities in media and entertainment throughout their sports careers.,” Clevinger said.

The Big Picture, led by Clevinger and Cordell, are in the midst of producing a documentary and a movie about Cordell.

Clevinger grew up around Cordell due to his uncle’s close relationship with him and understands that the message attached to his story is fascinating and inspirational.

“Cecil is an indescribable character because he goes out and performs at the highest levels that you can at his age, and he does it incredibly well and successful. He never loses, if he does its rare, and it just motivates him even more. I think that is super inspiring to any age group and it’s something that can inspire people.,” he said.

Cordell plans on being up and rehabbing soon after his surgery to prepare for more events and continue his mentality of never stopping. For anyone that knows him, it is no surprise that he will be eager to be moving again because he is one of a kind.

Only time will tell if he makes it back to the levels of recent years but if Cecil Cordell has anything to say about it, he will be winning medals again in no time.