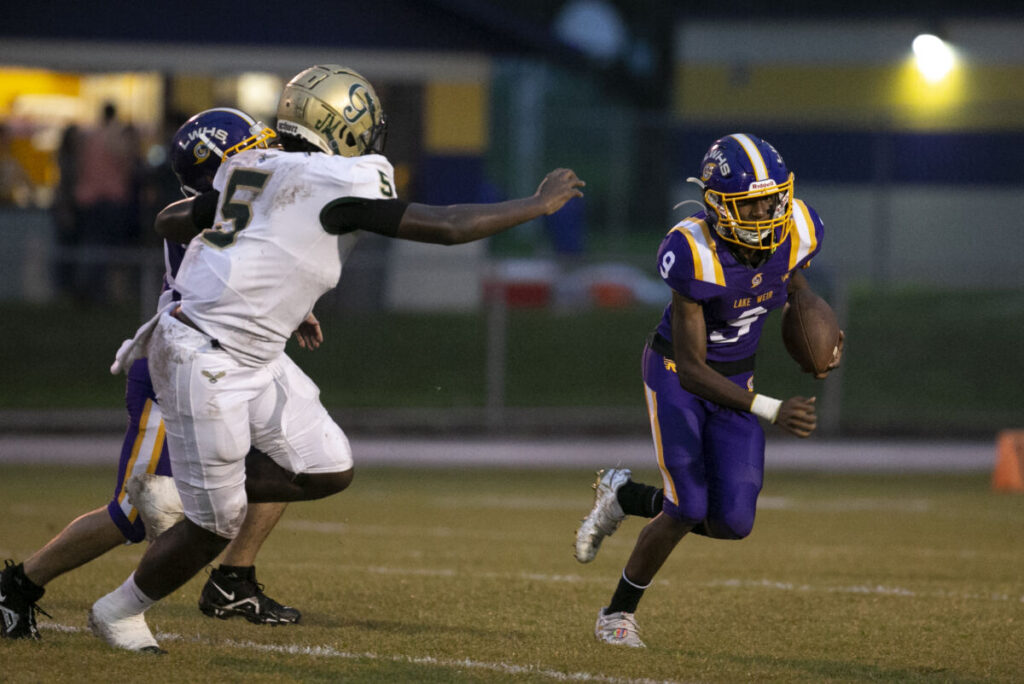 The Lake Weir Hurricanes were home for the second week in a row on Friday night as they hosted the George Jenkins Eagles from Lakeland.

The Eagles took the lead in the first quarter on a touchdown pass on fourth and goal from the 11. Hurricanes first-year head coach Jason Roberts took the blame for the defensive call.

“I made a poor call by trying to make something up and the guy got open, and the quarterback scrambled to create extra time to find his receiver.”

The Eagles extended their lead to 14-0 right before halftime on a jump pass touchdown from senior quarterback Sincere Burroughs. The Lake Weir defense battled all night and kept it a two-possession game, but the offense could not punch it in.

Despite the struggles from the offense, Roberts was pleased with his running back group and their efforts, he mentioned Jackson Quick, Ishmael Hamilton and Allen Perry as having solid nights carrying the ball.

The next step for Roberts is to get his passing game going and not allow opposing defenses to key in on the run plays.

“We got to find that spark and find that passing game. We are super young, and our run game only works for so long before they start stacking the box and shutting it down. We have to find something to stretch the defense and open up more running lanes for us.,”

Regardless of the offensive output, the Hurricanes defense fought hard and kept the Eagles off the scoreboard in the second half.

“Defense played physical and were aggressive getting to the ball.,” Roberts said. He mentioned outside linebackers Owen Stahl and Jamauri Jackson, inside linebacker Jerborie Steele and the secondary of Jacob Cooper, Walter Turner, Jahari Holt and Trenton Woods as standouts.

With his team now 0-4, it is crucial for Roberts and his staff to keep the players engaged and motivated to perform. The head coach is seeing progress from his team and feels the wins will start coming their way soon.

“You would think it would be negative with the way things have started but they’re starting to come together as a team. They are starting to see progress and see that it is changing. We are going to win here, its not a matter of if, it’s a matter of when.,” he said.

The Hurricanes will host the undefeated Palatka Panthers next Friday at 7 p.m.