Forest outlasts Belleview for first win of the season 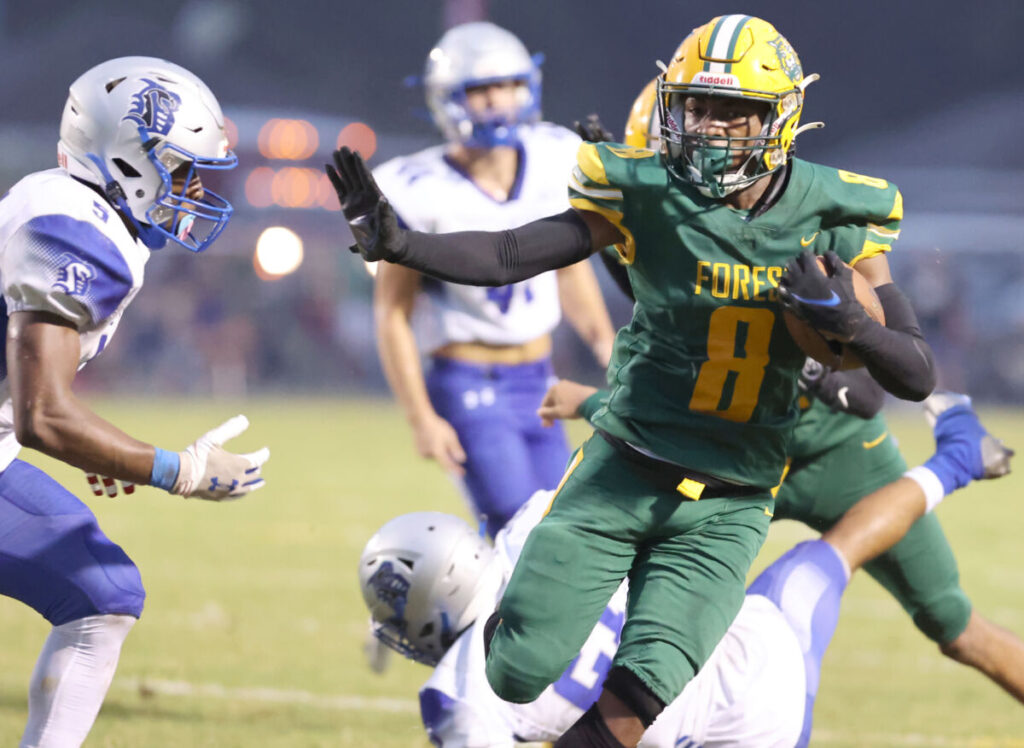 It was a battle of two first-year head coaches as the Forest Wildcats hosted the Belleview Rattlers on Friday night.

For the Wildcats, they were looking to get Eoghan Cullen his first win as head coach of the program. Cullen’s defense got off to a fast start by forcing a fumble on the opening drive and eight plays later, the Wildcats offense took the lead on a two-yard touchdown run by senior tight end/linebacker Tae Floyd.

The biggest play of the drive came on third and 29 when quarterback Vimel Poole hit wide receiver Tramar Cave in stride for a 40-yard completion.  The Rattlers would answer two plays later when freshman quarterback Matt Dial, making his first start, launched a rainbow down the left sideline for a 50-yard touchdown to senior wide receiver Davonte Welcome to give Belleview a 7-6 lead with three minutes left in the first quarter.

It was the first touchdown pass of Dial’s career and the early success gave him confidence and poise that he carried throughout the game.

“I felt good but kind of nervous at the beginning but once I got the first snap it was all good.,” Dial said.

Rattlers head coach Brian Lane was pleased with Dial’s poise and sees a bright future for the freshman signal-caller. “Matt had a real gutsy performance for his first start. He got thrown into the fire last week against North Marion and he showed us that he is able to get rid of the ball quick. I thought he did pretty good for his first start.,” he said.

The Wildcats offense punched right back as Cave came up with a 13-yard reception on third and 3. Two plays later, sophomore running back Amadrick Hope scored from 13 yards out to give Forest a 13-7 lead.

On the first play of the second quarter, Rattlers running back Jaheem Shannon fumbled and Floyd came up with the recovery. The fumble recovery gave Forest great field position as they started on the Belleview 12-yard line.

Floyd, a transfer from West Port, is a two-way starter who made his presence felt on both sides against Belleview.

“It feels so great, knowing that I can help the team in as many ways as possible.,” he said.

It looked as if Forest may take there 12-point lead to the locker room but on fourth and 15, Poole found sophomore wide receiver DeAnthony Sancho open in the middle and Sancho would break two tackles on his way to the end zone for a 31-yard touchdown reception to extend the lead to 25-7.

Poole and his receivers had a great connection all night and made big plays when needed. “They did good, they were catching the ball and getting open, I love it.,” he said.

The Rattlers struck first in the second half after the defense forced a punt. On the ensuing drive, the Rattlers offense leaned on Shannon for three consecutive first down runs and Dial would connect with sophomore wide receiver JJ White for a 17-yard touchdown to bring the deficit to 25-13 after a blocked extra point.

The defenses stood tall and forced punts to keep the score the same. Belleview forced another three and out before getting a huge break that let them back into the game. On the punt, a high snap led to a scramble in the endzone for the ball and freshman wide receiver Hunter Schaller recovered it for a touchdown to make the score 25-19.

During the first couple games, a bad play has snowballed into multiple mistakes for Forest in crucial moments. Floyd and other veteran leaders had to keep the team calm and remind them that the goal of winning is still attainable.

“Don’t give up, keep pushing on every play. We had to tell our team to not let that get them down, its just one play and keep the energy.,” he said.

Poole and the offense would grab back the momentum and on third and less than a yard on the following drive, Poole rolled to his right and launched a perfect pass to an open Matt Hart down the sideline for a 68-yard gain. The quarterback would score a 1-yard touchdown on the next play to extend their lead to 31-19

As a junior and the starting quarterback, Poole has had to step up and become a leader this season. Plays like the third down pass to Hart shows he can be counted on in big moments.

The fourth quarter was a defensive battle filled with punts and interceptions, with both teams picking off the opposing quarterback. Forest got an interception from junior Cayden Pittman while Belleview got one from Shannon.

The Wildcats would run out the clock after a turnover on downs to pick up their first win of the 2022 season and first win under head coach Eoghan Cullen.

“It feels great, after that loss last week we talked about focusing on the little things all week in practice. The kids did a great job, and they brought the energy to the game tonight.,” he said.

As for the Rattlers, after a 2-0 start to Coach Lane’s tenure, they have lost back-to-back games to county rivals and will head into a bye week. Despite the tough losses, Lane is optimistic for the rest of the season and knows his team will bounce back.

“We still have everything in front of us. We haven’t played a district game yet, so we can still be district champions. We’re going to go back to the drawing board and get back to practice on Tuesday and go from there.,” he said.

For Cullen and his team, the grind continues despite the win and its back to work on Monday to keep the momentum.

“We got Dunnellon next week and then our first district game (South Lake) the week after. We want to keep this momentum going and build it up.,” he said.

Belleview falls to 2-2 on the season as they head into their bye week before hosting Vanguard on September 30th at 7:30 p.m.

For Forest, they move to 1-2 on the season and will host Dunnellon next Friday at 7 p.m.