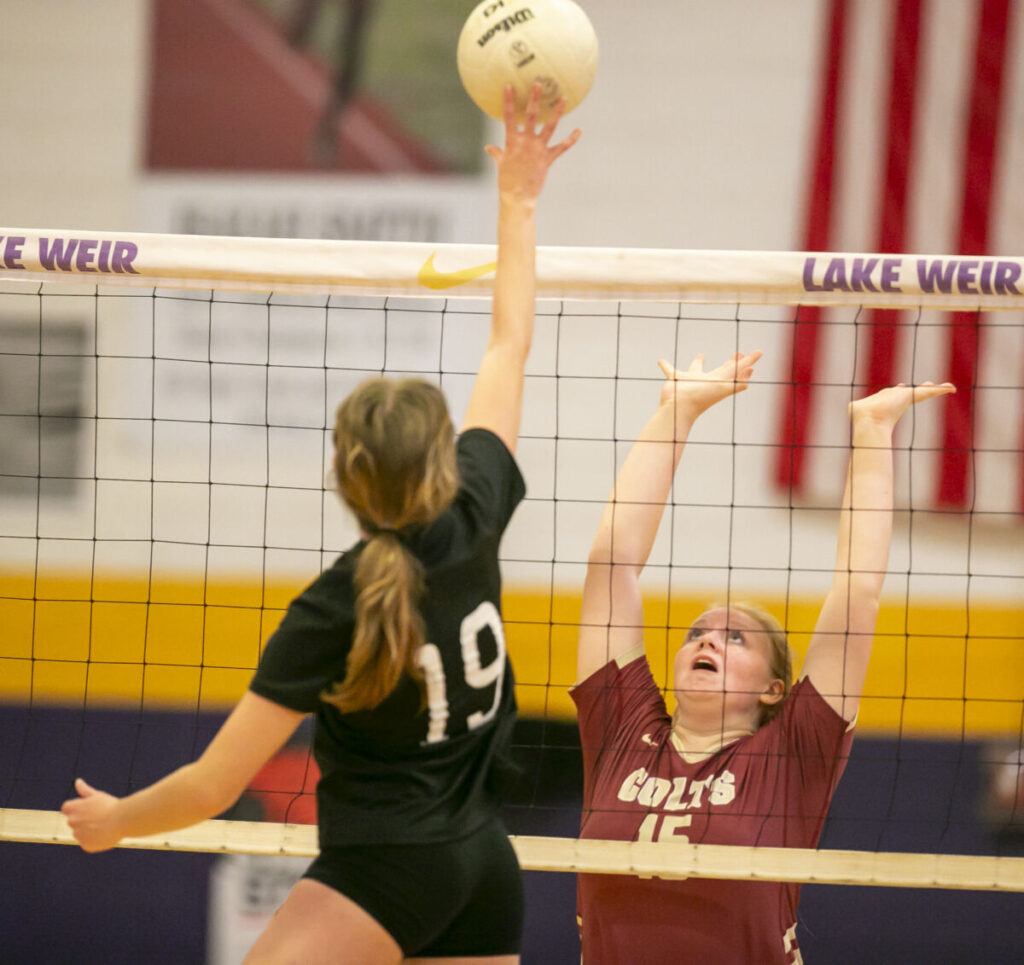 Photos By Alan Youngblood/Special To The Ocala Gazette

North Marion got solid net play by sophomore outside hitter Jadair Montoya and seniors Lainee Hall and Kendall McCubbin en route to a sweep of Lake Weir by scores of 25-18, 26-24 and 25-7 on Tuesday night.

The win gave North Marion a season sweep over Lake Weir and improved the Class 4A Colts to 5-8 on the season.

“It was a good match for us and I think we did pretty well considering the girls were coming off a five-game tournament over the weekend,” said North Marion coach Richard Guerrero. “Some of the girls were a little tired and sore but we were able to play everyone and that was good. I have to give it up to the Lake Weir coach (Jenna Dupleffis) because her team always plays hard and she is doing a tremendous job.”

The loss dropped Class 4A Lake Weir, which has shown vast improvement during the course of the season, to 0-10.

“We’re a young team and the girls played hard,” said Hurricanes coach Jenna Dupleffis. “Especially in the second set when we had a chance to win. We’ve improved a great deal since the start of the season, especially our serve receive, and we’re just focused on trying to get better.”

Lake Weir showed it wasn’t going to be a quick match as the Hurricanes jumped out to a 3-1 lead in the first set as senior Sanna King scored points at the net with perfectly placed shots.

North Marion got its offensive attack going as Montoya had a pair of kills, Nehemiya Smith added a spike and Hall had back-to-back serve aces as the Colts went on a 12-1 run to take a 13-4 lead.

Lake Weir took a time out and that seemed to settle the Hurricanes down as they pulled within 21-15, but North Marion’s Smith and Montoya drilled winners and the Colts eased to the first set win.

The second set was similar to the first as Lake Weir held an early 4-2 advantage before North Marion roared back to take a 23-17 lead as McCubbin scored several points with excellent serves and Kensey Thomas found holes in the Lake Weir defense with well-placed shots.

The Hurricanes got service aces from Mckenzee Adames and a pair of spikes by Smith to tie the score at 24. Thomas ripped a cross-court spike and a shot by Lake Weir went into the net to give the second set to the Colts.

The third and final set was fairly one-sided as North Marion rode the momentum from winning the exciting second set and jumped in front by a score of 14-5 as Montoya had a pair of kill shots and Hall scored with a well-timed dink shot.

Despite the deficit, Lake Weir continued to play hard and battled North Marion with numerous long rallies that ended up going the way of the Colts.

A block and a kill shot by Hall and a dink shot by Brooke McConnell put North Marion on match point and a Lake Weir serve sailed long to give the set and the match to the Colts.

“It’s always good to win,” coach Guerrero said. “We’re getting better but we still have room for improvement.”

North Marion is back in action with a home match on Thursday night against West Port. Lake Weir is at Umatilla on Wednesday night.