Nothing more, your honor

Eight years of litigation over fire service fees culminates with the key question from the public: Where’s our money? 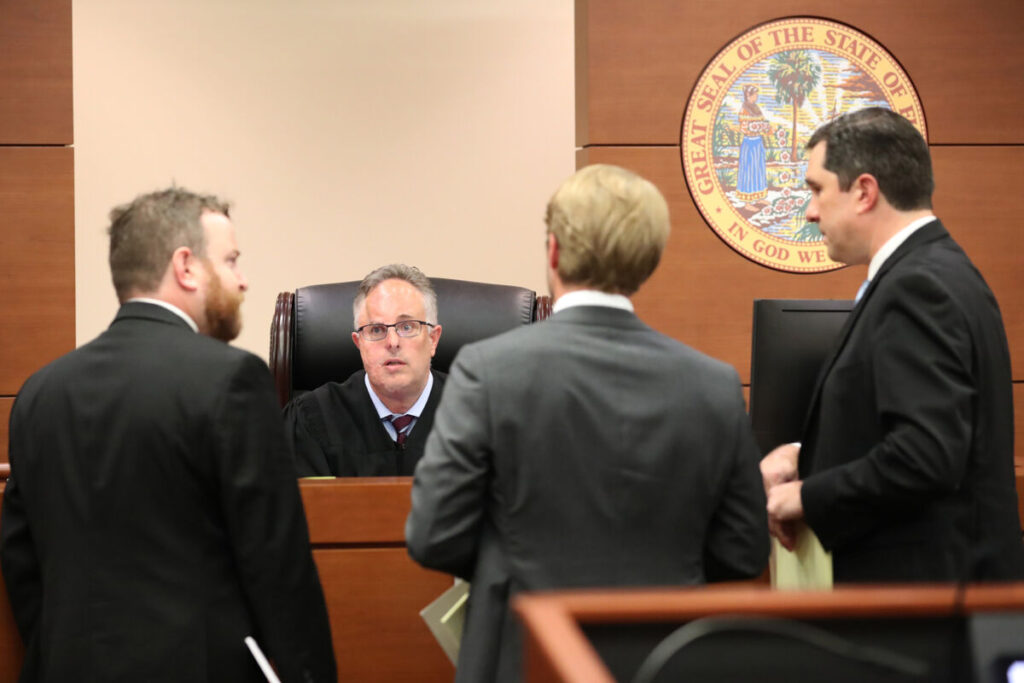 Judge Robert Hodges has a bench conference with attorneys Jason Zimmerman, Robert Batsel Jr. and Derek Schroth, left to right, during the $80 million City of Ocala Fire Fee lawsuit hearing at the Marion County Judicial Center in Ocala, Fla. on Tuesday, May 10, 2022. About 100 concerned citizens packed courtroom 1 for the final hearing of the lawsuit at the courthouse. [Bruce Ackerman/Ocala Gazette] 2022.

After eight years of legal battles over $80 million in improper fire service fees collected from Ocala utility customers, few issues were left to resolve at a final hearing on the matter Tuesday. Chief among them were similar questions from both the customers and the lawyers who represented them: How much money are we getting and when can we expect a check?

Approximately 200 members of the class-action suit attended the hearing before Circuit Judge Robert W. Hodges, a fraction of the more than 89,000 prior and current account holders who received final hearing notices mailed by the city. Their questions largely centered on the amount of money owed to them and when the refunds would arrive.

Jason Zimmerman, attorney for the city, indicated that they expected refund checks to be issued within 60 days.

The case stems from a long-running class-action suit that was filed in 2014 over the approximately $15 a month that more than 100,000 Ocala residents paid for fire services as an add on to their Ocala utility bills. During the trial, the city’s attorney explained Ocala implemented the tax in 2006 to spread the cost of fire services across a broad group of citizens who wouldn’t usually be paying them because they didn’t own real property or were tax-exempt. An appellate court found the fees constituted an illegal tax, and in October, Hodges ordered the city to establish a common fund to refund the fees.

Due to the 5th District Court of Appeal’s ruling, the refunds equal the amount of money received in fire fees by the city from residents and businesses via city utility bills from 2010 until the beginning of 2021, when the city stopped charging it.

One resident asked why the refunds weren’t calculated from 2006 when the city first started charging them. Hodges explained the fees weren’t challenged until the lawsuit was filed in 2014, and due to the four-year statute of limitations, claims prior to 2010 were barred.

According to court documents, the class members were awarded refunds totaling $79,282,909 from the city. If the judge grants the request of the class attorneys Bowen|Schroth for payment of $6,649,681 in attorneys’ fees, and awards each of the class representatives, Dale Birch and Discount Sleep of Ocala LLC, $50,000 each, the remaining $72,633,228 will be disbursed to class action members at the rate of 91% of what they paid in the illegal tax.

Two experts, local attorney Ted Schatt and Donald Hemke, a Tampa lawyer with 47 years of experience, spoke to the challenges a case such as this presented to the plaintiffs’ attorney, Derek Schroth, who started the suit with two plaintiffs back in 2014.

Both lawyers spoke to the great risk to the firm by representing the plaintiffs over eight years because if the firm lost the case, the attorneys not only lost the work they invested but at least $200,000 in costs paid out of pocket during the course litigation. When Schroth asked Hemke if he knew of any other attorney in the state who would have taken on such a case, Hemke was hard-pressed to identify one.

Schatt pointed to over 500 court filings, three appeals, the unlikelihood of attorneys taking on such a case against the city they lived in- all in support of Bowen|Schroth receiving the attorney’s fees requested.

Both attorneys spoke to the professionalism of the attorney for the plaintiff and the vigorous defense the city attorneys gave in challenge.

Although the city did not oppose attorneys’ fees, a lawyer who previously worked on the case for the city, George Frajola, objected to attorneys’ fees as a plaintiff in the class-action suit. The crux of his complaint was that attorneys’ fees should not be awarded because the firm solicited the plaintiffs as clients.

However, Schroth pointed out the exception to that rule: a previously established attorney-client relationship. The court had previously ruled on the same objection brought by the city and found the attorney for the plaintiffs was entitled to attorneys’ fees.

Hodges did not rule on whether he was awarding the two original class action plaintiffs, Discount Sleep and Birch, an additional $50,000 each for their initiation and participation in the suit since 2014.

Hodges also did not rule on the amount of the award of attorney’s fees.

At least two residents asked what happens to money owed to account holders who had since passed. Hodges explained their heirs would be entitled to apply for the refund owed a decedent’s estate.

One resident asked if the city was required to pay interest on the illegal tax they collected; the judge said the law prohibited the city from being charged interest in this case.

Another resident objected to the class members having to pay attorney’s fees out of their refunds.  She felt it was more equitable for the city to pay attorneys fees so that the claimants could receive a larger share of the refunds owed.

The judge and Hemke both commented how remarkable it was for class members to receive a return of 91 cents on the dollar even after paying attorneys’ fees and costs.

There was only one issue that became a debate: What to do with the unclaimed funds after a year’s period when the city could not find the account holder?

Schroth suggested the city pay the unclaimed funds to the state, pursuant to Chapter 717 of the Florida statutes called the Florida Disposition of Unclaimed Property Act. Under the statute, it would give additional time for unlocated class members to claim their refunds.

The attorneys representing the city at the hearing, Zimmerman and Robert Batsel, Jr., argued the city should be able to retain the unclaimed funds and apply it to a substantial liability the incurred in order pay the refunds, a bank note in the sum of $60 million.

After some discussion about applicable case law and how much discretion he had to rule, Hodges ordered the city to pay the unclaimed funds out in a second disbursement to the claimants established in the first-round pro-rata.

One of the more meaningful exchanges between the judge and a class member was in answer to a question raised, “Why are we here? Where are the checks and balances?”

To which Hodges explained that they were witnessing the checks and balances in place with this court ruling. He explained that every time any legislative body creates a law, the public can appeal to the courts questioning the constitutionality of the measure. “The court is the check on that,” he said.

Hodges acknowledged the litigation took a long time, “But ultimately, in the end, through the appellate process, the 5th District Court of Appeals ruled that the legislation was unconstitutional. And that is why we find ourselves here today.”