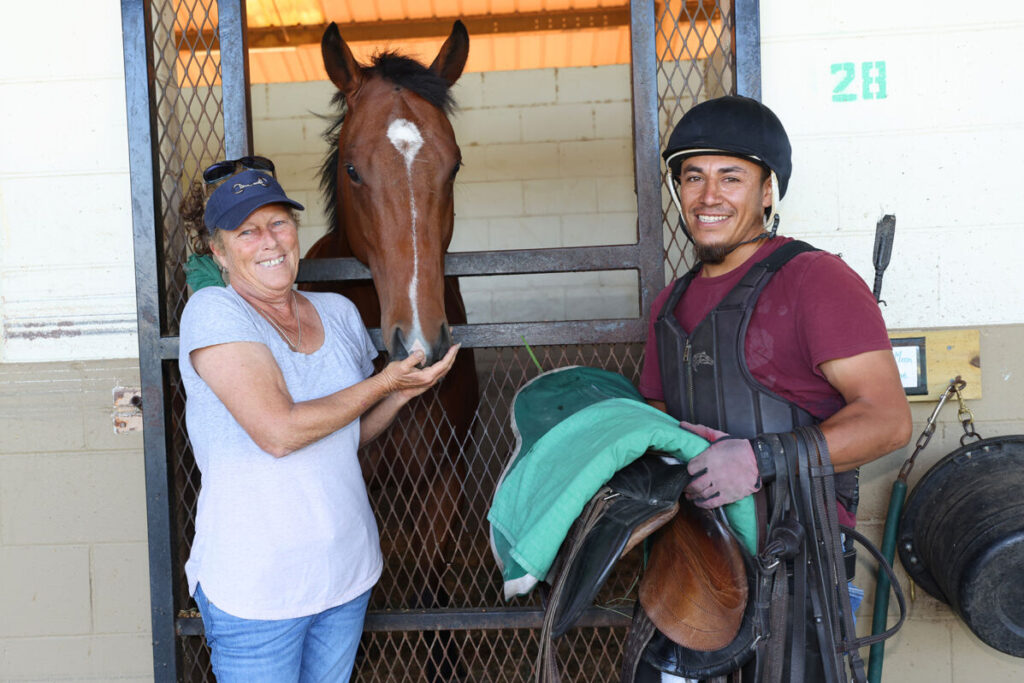 April Mayberry, left, and exercise rider Eddie Herrera-Ordonez, right, who broke and trained Kentucky Derby winner Rich Strike, spend some time with a Ransom The Moon colt in the barn area before the colt was worked out at the Mayberry Farm training facility. on Wednesday, May 11, 2022. [Bruce Ackerman/Ocala Gazette] 2022.

In horse racing, timing is everything. Rich Strike’s stunning 80-1 upset in the 148th running of the Kentucky Derby at Churchill Downs on Saturday, May 7, shocked the sports world, but for the team at Ocala’s Mayberry Farm—where Rich Strike was originally trained—the surprising but welcomed result was years in the making.

April Mayberry, a fourth-generation horsewoman, operates Mayberry Farm along with her mother, Jeanne, and sister, Summer. April and Summer’s late father, Brian, who passed away in 1998 at the age of 60 following a battle with cancer, was a leading trainer in Southern California in the 1980s and ‘90s. Although he never started a horse in the Kentucky Derby, Brian won the Kentucky Oaks in 1994 with Sardula for his primary owners Mr. and Mrs. Jerome Moss. The family’s success in Kentucky doesn’t stop there. Brian’s grandfather and April and Summer’s great-grandfather, John Mayberry, won the Kentucky Derby as a trainer in 1903 with Judge Himes.

It’s clear that expert horsemanship runs in the family as April and Summer have inherited an instinctual understanding of the equine athletes they prepare. Every year, Mayberry Farm breaks and trains 100 young horses, putting them through the paces and teaching them how to be racehorses before they move on to their careers at the racetrack.

Rich Strike’s dramatic triumph in the Kentucky Derby, in which he rallied past the well-fancied Epicenter and Zandon close to home en route to a 1 ¾-length score, provided Mayberry Farm with its first-ever Kentucky Derby winner. In the process, Rich Strike became the second-biggest longshot in the history of the race to win the Derby. Only Donerail at odds of 91-1 in 1913 won the Derby at higher odds.

“I had friends and my mother over,” shared April Mayberry who watched with pride as Rich Strike rallied past the favorites in deep stretch. “I’ll tell you what, at the eighth pole, I am happy the police didn’t show up at my house because I am sure my neighbors thought someone was getting killed. The dogs ran for cover. Everyone in the house was screaming. It was one of the most exciting things ever. It was like, ‘Oh my God, I can’t believe it.’”

While Rich Strike may not have been a standout student when he began his initial training lessons, April felt that the colt—a son of Keen Ice bred in Kentucky by Calumet Farm and owned by Richard Dawson’s Red TR-Racing—just needed time to mature before discovering his best stride. Unquestionably, he raised his game for veteran trainer Eric Reed and found his top form when it mattered most.

“He was always a nice horse to be around,” said Mayberry. “He was still quite the teenager by the time he left us. There was a lot more focusing he needed to do. A lot of times with colts, it’s just time. That’s something as a trainer you can’t make them do (focus). He was broke and did everything he was supposed to do, but there wasn’t a lot of concentration going on yet. I was never worried it wouldn’t come. I knew it would eventually.

“He was just like a teenage boy for lack of a better phrase,” Mayberry added. “He was always full of himself; he wanted to play. He was a happy horse, but he didn’t have a lot of concentration. For the most part, he was just happy to train, happy to go out in his paddock, just a cool horse to be around.”

What impressed Mayberry the most about Rich Strike’s Kentucky Derby performance was the composure that he showed on racing’s biggest day, vanquishing some of the leading 3-year-olds in the world.

“The thing that really came through in the race, if you take the talent away from it, was the confidence,” she said. “The confidence that the horse had and the confidence the rider (Sonny Leon) had. The horse can’t read the tote board. Horses don’t know what their pedigree is, they don’t know who their mother is. That horse ran with such confidence. I wish all my horses had that kind of confidence. He ran like he was a 3-2 shot and the rider rode him like he was 3-2. I think not having the pressure of being 3-2 was great for them because they could do no wrong.”

Rich Strike’s exercise rider during his days at Mayberry Farm was Eddie Herrera-Ordonez, who created some Derby lore of his own with the historic win. In addition to being the first rider to get on Rich Strike’s back, Herrera also broke, trained, and sold White Abarrio. Sold by Herrera (Nice And Easy Thoroughbreds) at Ocala Breeders’ Sales Company for $40,000 at the 2021 March Sale, White Abarrio captured the Florida Derby and finished 16th in the Kentucky Derby.

“Eddie actually went to the Derby to watch White Abarrio, and it’s interesting that Rich Strike won,” Mayberry said. “I don’t know what the odds of that happening would be, but I find it amazing.”

A key to Mayberry Farm’s success, according to April, is the experience that the family received working on the racetrack before opening the farm.

“Most people go from the farm to the racetrack,” Mayberry said. “We did it the opposite way, which I think is a big advantage for us. Being at the track for so long, I remember when I would get the 2-year-olds in, and the things that would maybe bug me a bit about how they were broke, the things they were afraid of, we’ve been able to take all of that and tweak it a little bit. That allows us to prepare horses how I would want to receive them if I was still at the racetrack. That’s what we try to do with every horse. It’s interesting to have come full circle.”

The Mayberry family has earned a well-deserved reputation for preparing some of the industry’s top runners in recent years. Among the horses that have benefited from an early education at Mayberry Farm are the likes of Grade 1 winners Zenyatta, Flightline, Accelerate, Texas Red and Exaggerator, just to name a few.

“To be involved (in the thoroughbred industry) from birth and to see the horses we’ve had our hands on over the years is just amazing,” Mayberry said. “I didn’t come into this industry in my 20s, thinking I want to be a horse trainer. For most trainers, that’s the way you do it. I don’t know if I can articulate how special it is for us. It’s unbelievable. It really is.”

Mayberry said that identifying horses with an abundance of talent is uncomplicated. So, too, is recognizing which horses don’t possess the talent necessary to become stars on the racetrack. The challenge for trainers of young horses resides in assessing most of the students that don’t fall into the aforementioned categories since it is often too soon to form a strong opinion based on their demonstrated ability.

“As a trainer, you get the top horses in, like Flightline or Zenyatta, those horses, you know what kind of horses they are early on,” Mayberry explained. “Then there are horses you don’t think are going to make it at all talent-wise, and you know those early on as well. It’s all the horses in the middle that you don’t know how they are going to turn out because they are still babies. If I had turned out how my parents thought I might have when I was in high school, it would not have been pretty. Luckily, I matured and got smarter with age.

“Maturity did a lot for me, and it’s the same way with horses,” Mayberry continued. “It actually reminds me a lot of high school. It’s funny, the girls (fillies) from their yearling year to becoming a 2-year-old are very focused right then and there. When they come in, they are extremely focused. The girls come around so much quicker. They are much better students. They want to do whatever it is that you want them to do. They are very willing. The boys come in and they are more like, ‘Where are the girls? Where is my food? Is that a bird in the tree?’ Then the guard kind of changes going into their late 2-year-old season and early as a 3-year-old. The boys are finally like, ‘OK, I got what you were trying to teach me. I’ve got it now.’ And the girls are like, ‘I’ve been good for a long time now and I want to play.’ It’s funny how that goes.”

“When I used to work for Baffert in my early days in Kentucky, I was there with Silver Charm and Real Quiet when they won the Derby,” Mayberry said. “There is nothing in the world like the Derby. Unless you are in it, there aren’t words to describe it.

“Watching on TV brought back memories of what it’s like to be there,” Mayberry added. “And that made it all the more exciting and special for me. To know what everyone there was thinking and feeling made it even more special. There is nothing in the world like it.”

While Rich Strike’s brave win on a national stage helped Mayberry Farm achieve a milestone that every operation in the thoroughbred business strives for, Mayberry was still unable to find the words to describe it all a few days after the historical victory.

“It’s hard to put into words,” she said. “This business can have the highest highs and the lowest lows. There’s nothing else like it. (This win shows) anyone can do it, and it is possible for anyone to play on that stage, which is what makes it such a great game. It’s such a feel-good deal and we’re so happy for the owner and trainer and everyone involved. I know how they feel. It’s amazing. I don’t know if there are words to describe the feeling.”