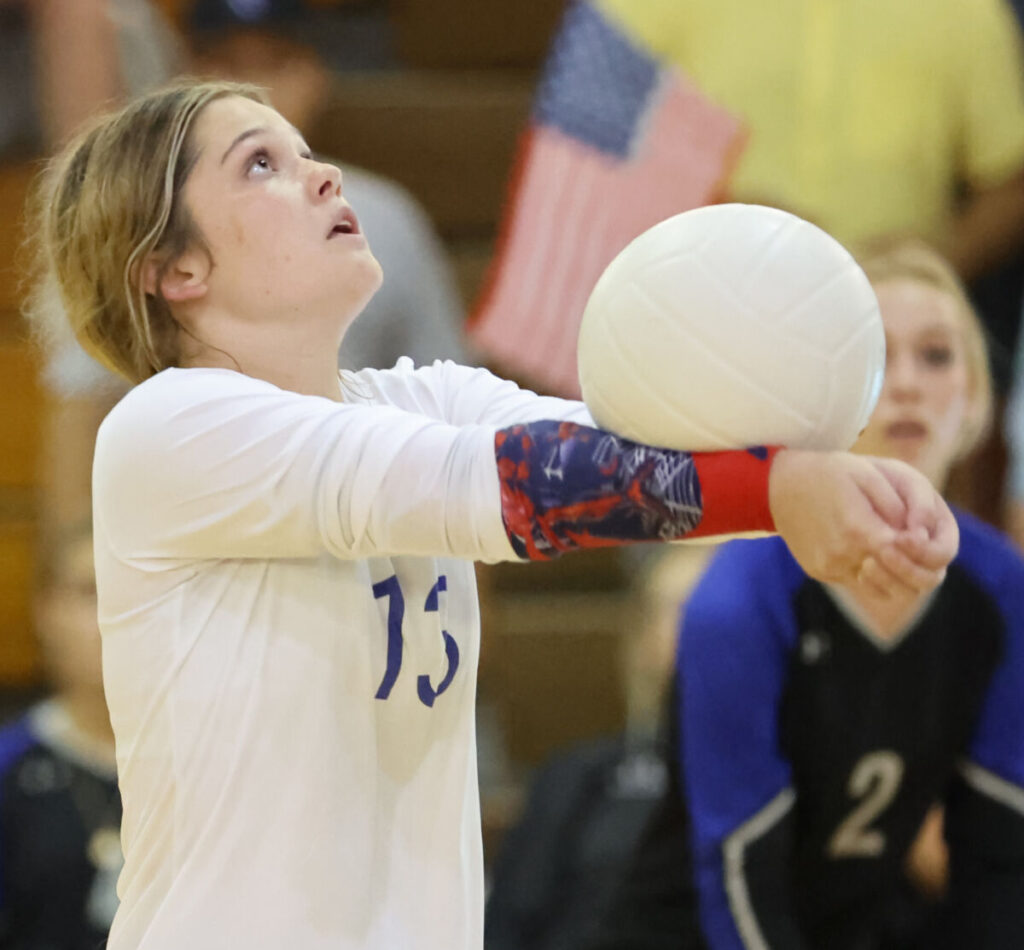 Photos By Bruce Ackerman/Ocala Gazette
Belleview used a balanced attack to ease past West Port in straight sets by scores of 25-12, 25-19 and 25-12 in high school volleyball on Thursday night.
The loss dropped Class 7A West Port to 1-4 overall, while the win evened Class 5A Belleview’s record at 3-3 on the season.
“I’m very pleased with our performance,” said Belleview coach Lindsay Seek. “The first and third sets really showed where we’re getting to midway through the season. The second set we got a little comfortable and a little lazy but overall we had a good effort.”
Belleview jumped out to an 18-8 lead in the first set as freshman outside hitter Kyndall Seek had three of her match-high eight kills and sophomore middle hitter Kahleah Lancaster added two of her seven kills.
West Port had trouble scoring points with any consistency against the Rattlers, who showed excellent quickness and reflexes in getting the ball back over the net.
Belleview junior defensive specialist Natilee Collins had several of her 13 digs to keep the ball in play as the Rattlers eased to the 25-12 win in the first set.
West Port came out strong in the second set as seniors Pressley Sutter, Yalitza Negron and freshman Karelis Molina-Campos found the range with several kill shots. The Wolf Pack built leads of 4-2, 10-8 and 13-12 before Belleview battled back behind solid play from junior Dakota Krajewski and senior Kendall Swearingen, who totaled 13 digs, three aces and three kills on the night.
Belleview increased its lead to 24-19 and Seek drilled a cross-court spike to seal the second set victory for the Rattlers.
With momentum on its side, Belleview took full advantage in the third set by storming out to a 17-6 lead. Krajewski sparked a run of points with excellent serving, which included a number of aces.
The Wolf Pack tried to claw back in the match with a nice run of points, but Belleview finished with a flourish as Krajewski unleashed a service ace to give the set and match to the Rattlers.
“We had good hitters, our defense was pretty sound, our serve-receive was good and I couldn’t ask for a better showing from the girls,” said coach Seek. “We have three seniors and a lot of talented underclassmen on the team, so we’re excited and we have a lot to look forward to the next couple of years. More than anything, I really want the girls to believe what they are capable of doing. They can compete with any of the teams that are on our schedule. I wouldn’t have scheduled them if I didn’t believe that. The girls are working hard to improve and I think we’re going to be just fine.”
Belleview is back in action on Tuesday night with an away match at Vanguard. The Rattlers host Trinity Catholic on Wednesday. West Port has a home match against Dunnellon on Thursday night.