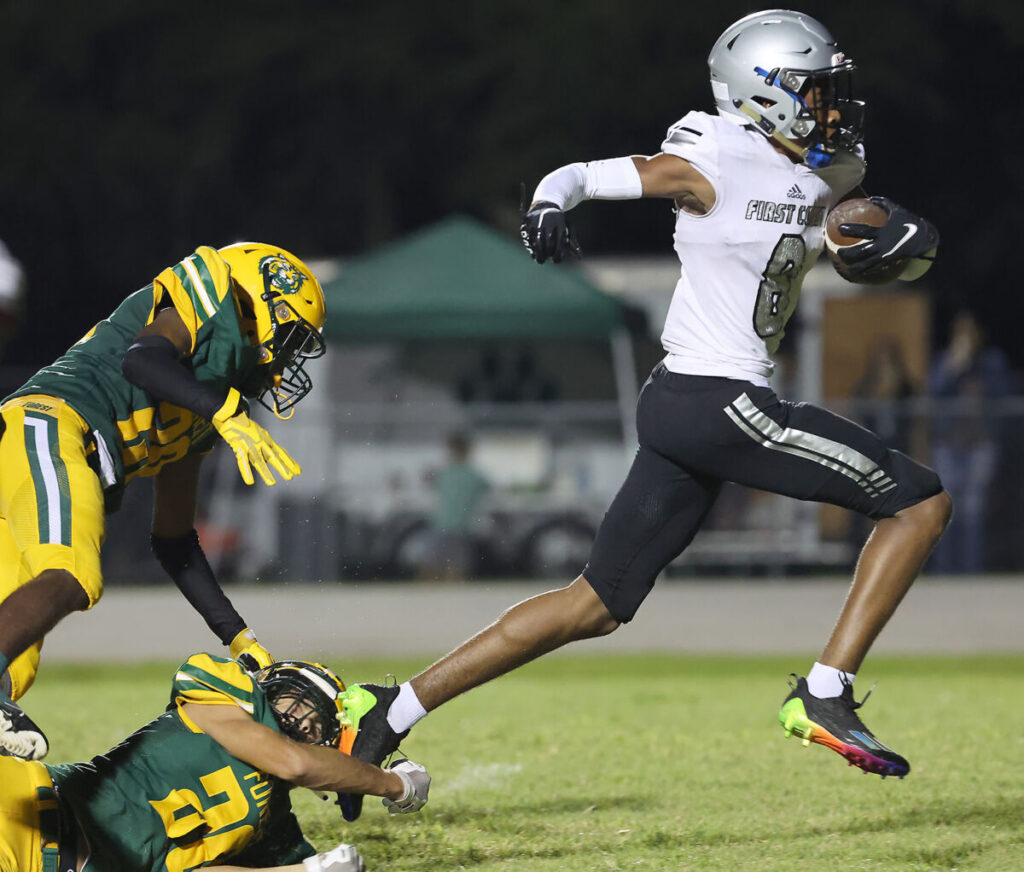 A week after the Forest Wildcats had their trip to First Coast High School in Jacksonville canceled due to weather, the Wildcats got the opportunity to host the Buccaneers on Friday night.

The evening got off to an inauspicious start with First Coast dealing with bad weather while traveling. They arrived at Wildcat Stadium around 7:30 and the game did not start until 8 p.m., each of the first two games for Forest have been delayed an hour due to weather.

Both teams had their opening drives end in punts. The Buccaneers defense made the first big play of the night by forcing a fumble after Amadrick Hope ran for a first down. First Coast got back-to-back first downs through the air to wide receivers Adron Walker and Thomas Jackson.

On second and goal from the one-yard line, senior linebacker Miles Smith punched in the first score of the night to give the Buccaneers a 6-0 lead. Penalties and punts would be the definition of the next drive for both teams until First Coast junior quarterback Rodney Tisdall Jr hit Walker on a short pass near the right sideline. Walker would avoid a couple tackles and use his speed to get into the endzone from 30 yards out. Senior wide receiver Jahmier Grays would catch the two-point conversion to give the Buccaneers a 14-0 lead.

Walker led the Bucs with six receptions for 79 yards and a touchdown. “I had to do my thing, had to go out and play a good game.,” he said.

On the ensuing drive, Forest was gifted a first down because of defensive pass interference but a lost fumble by Tramar Cave gave the ball back to First Coast with great field position. The Wildcats defense stepped up and on third and long, senior defensive back Ryan Jackson intercepted Tisdall and returned it to the two-yard line.

Three plays later, senior tight end/linebacker Braeden Farmer scored from a yard out to get the Wildcats on the board and cut the lead to 14-7.

The Forest defense would pick up a second interception, this time it was sophomore wide receiver/cornerback DeAnthony Sancho. Forest got good field position and had an opportunity to get three points on a 27-yard field goal attempt. Smith blocked the kick and senior defensive back Anthony Bivines scooped up the ball and took it 70 yards for a touchdown, following a two-point conversion reception by Walker, First Coast took a 22-7 lead into halftime.

The Wildcats defense opened the second half by forcing a punt and after a 36-yard reception by Sancho got the offense into the redzone, Hope would score from five yards out to make the score 22-14.

Both teams would trade punts amidst a handful of penalties, there were over 20 penalties called between the teams in the game. On the first drive of the fourth quarter for First Coast, their offense faced 3rd and 12 from their 34-yard line. Junior Auston Harris would break free for 42 yards, Harris would finish the drive with a 16-yard run and a 10-yard touchdown run to extend the lead to 28-14. After a Forest punt, Harris would tote the rock for three consecutive carries for 39 yards and score for the second consecutive drive to put First Coast in the driver’s seat with just over 10 minutes left to go.

Harris had over 150 rushing yards and two touchdowns on the night with most of his yards coming in the second half to wear down the Forest defense.

Forest senior defensive back Curtis Evans would nab the third interception of the night for the defense and eight plays later, Wildcats quarterback Vimel Poole Jr scampered in for a 3-yard touchdown run to get the score to 36-22. The Buccaneers would run out the clock and notch their first win of the 2022 season.

The Wildcats defense at times looked impressive with the three forced turnovers and a handful of stops to keep their team within striking distance. Even with the solid performance, Farmer knows that works needs to be done and the group must continue to improve.

“We just have to work harder, practice and execute better on offense and defense. We have to start wrapping up (tackles).,” he said.

Wildcats head coach Eoghan Cullen was happy with the effort and resiliency his team showed and feels that success is right around the corner.

He added, “We just have to clean up the little things like holding on to the ball, continuing to be physical, make tackles and block better.”

There were times where Forest looked dead in the water, but they continued to fight and eventually that will pay off for them, Cullen said.

“When the game was over, I told the kids how proud of them I was. There was a couple of times where we stopped them from scoring and this game could have easily been more out of control. The kids continue to fight and never quit and that’s the key.,” he said.

The Wildcats host county rival Belleview next Friday night at 7 p.m. as they look to get their first win of the season. For the Buccaneers, now 1-1 on the season, they will be on the road against archrival Riverside at 6:30 p.m. next Friday.