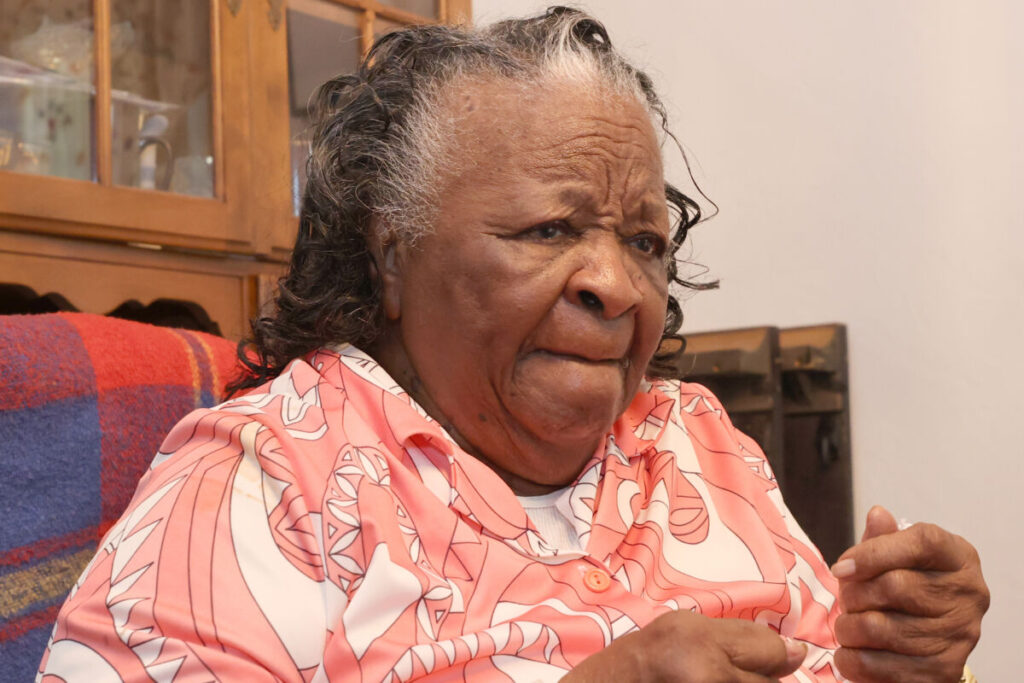 Allean Cunningham, 96, becomes emotional as she talks about her home which needs major repairs or rebuilding, on Southeast 31st Street in Ocala on Tuesday, May 24, 2022. [Bruce Ackerman/Ocala Gazette] 2022.

Nearly 60 years ago, Allean Cunningham set down roots in southeast Ocala. She raised 11 children in a two-bedroom house, did her laundry in a metal wash pot, and ate homegrown vegetables and barbecued pork cut from a hog her husband, Lester, butchered and cured in their backyard smokehouse. After Lester passed away in September, 1992, Allean continued to stay in their home, long after it had started falling apart.

These days, the little house on Southeast 31st Street suffers from multiple ailments, including cracked interior walls, rotted wood flooring, termite damage, inadequate electrical wiring, and damaged kitchen and bathroom fixtures. A leaky roof was replaced through Cunningham’s home insurance policy, and she now has a washer and dryer, but the home’s foundation and nearly everything else have been steadily crumbling away.

“I don’t have no memories nowhere else,” Cunningham said as she choked back tears. “I have memories here. My husband would cook and neighbors would come. Anybody who had kids, they could stay here too. Black or white. If they wanted to spend the night they could spend the night. I loved them all. If they got out of line they couldn’t come back.”

Cunningham will turn 97 on June 4. She’s legally blind, disabled, and living on an extremely low fixed income. Cunningham’s youngest daughter, Erica, lives with her as a full-time caregiver. A couple of years ago, an illness sent Allean to the hospital. She could hardly wait to get home, and now says she doesn’t want to leave.

“If I had to move, I’d just give up.” Cunningham said, her voice soft. “I’m fightin’ and tryin’ to hold on. It’ll make me live longer if I was satisfied. That’s all I want. God said he would never leave me or forsake me. I’d be happy if someone would just help me out.”

Cunningham’s son, Walter, understands his mother’s need to stay in the home her husband built with the help of neighbors and men from his workplace at Drake Construction. In the beginning the house had only two bedrooms and one bath.

“That’s when bunk beds was popular,” chuckled Walter, who was the fifth out of 11 children.

As more kids came along, his father and grandfather added two more bedrooms and another bathroom, he said. 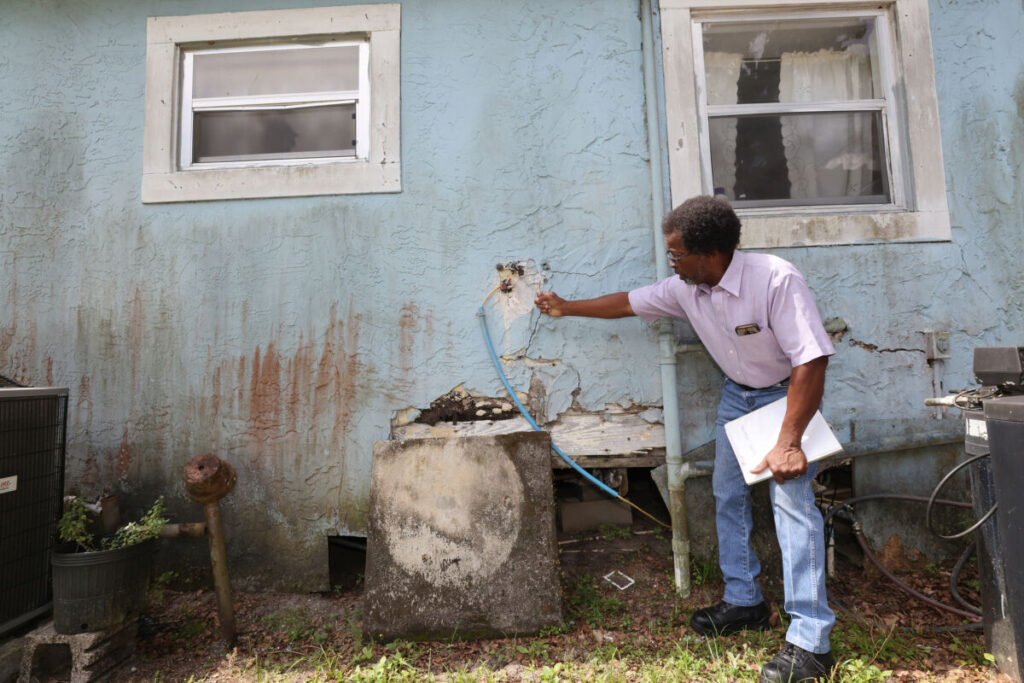 Walter Cunningham, Allean Cunningham’s son, shows the structural damage to the back of his mother’s home on Southeast 31st Street in Ocala on Tuesday, May 24, 2022. Allean Cunningham, 96, who will celebrate her 97th birthday on June 4, raised 11 children in the home that was built in 1965. Now the home is falling apart and the family has been trying for years to get help rebuilding the house which has been determined to be unsafe to live in. [Bruce Ackerman/Ocala Gazette] 2022.

“We paid for this place picking peanuts,” said Walter. “That’s how we survived.”

Walter and his wife, Audrey, live in Ocala, but they both work in West Palm Beach. Walter will turn 67 on June 1, but he has no plans to retire anytime soon.

“I want to stop working when I get my mother’s house done,” he said. “We even offered to let her live in our house. She didn’t want that. She’s old school. My dad struggled to pay for what they got so I have to respect her wish.”

To that end, Walter and Audrey have been trying since 2017 to get help from government programs or through local service organizations to either renovate his mother’s house, or to tear it down and build a new home for her. Audrey has corresponded with multiple government officials and community agencies, including U.S. Senator Rick Scott, Florida Senator Keith Perry, the U.S. Department of Housing and Urban Development, Marion County Community Services, Habitat for Humanity, and Community With A Heart—all to no avail. Every response deemed the structure in such poor condition it could not be repaired for the allowable grants, a determination that was confirmed through an independent certified inspection.

“It’s been stressful, very frustrating,” Audrey said. “I was seeking for her best and all the doors closed and nobody’s trying to help her. They said, ‘I’m sorry. It’s beyond our scope of help.’ Of course, she had a lot of things wrong with the house. They said to keep checking, but it would have been nice if somebody had said, ‘We can do this.’ They could only allow so much money and that’s it. So we’re still not done.”

Walter said he and his brother, Willie, have access to a front-end loader and can help with the demolition if one is arranged. Together with donations from his 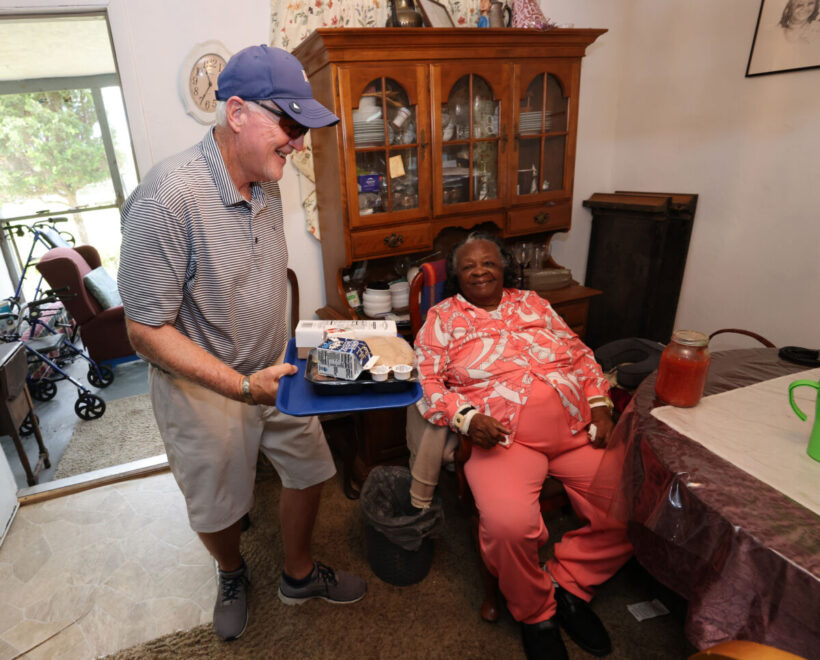 siblings and other relatives, he’s raised $41,000 toward the project, he said.

“If we can just get somebody to finance the rest of it, we’ll do whatever we can do,” Walter said.

In a Marion County Commission ruling on May 17, commissioners unanimously approved a State Housing Initiatives Partnership (SHIP) and a Local Housing Assistance Plan (LHAP), however, those programs are for renovations and don’t fit Cunningham’s need, noted County Commissioner Craig Curry.

“This home is so far beyond being able to repair it, they’re telling me it needs to be torn down and something built,” said Curry. “I hate to hear these stories. They’re heart-wrenching.”

According to an email from Stacie Causey, senior public relations specialist for Marion County, a Community Services team has been working to develop a new program that will address cases similar to Mrs. Cunningham’s.

Commissioner Curry agreed that such a plan might possibly help Cunningham.

“The new program seems to be, from what I’ve heard, written around her need,” Curry said. “It sounds like people are motivated to try to help this lady. I’ll keep it on my front burner to kind of check back with the staff to see how it’s coming along.”