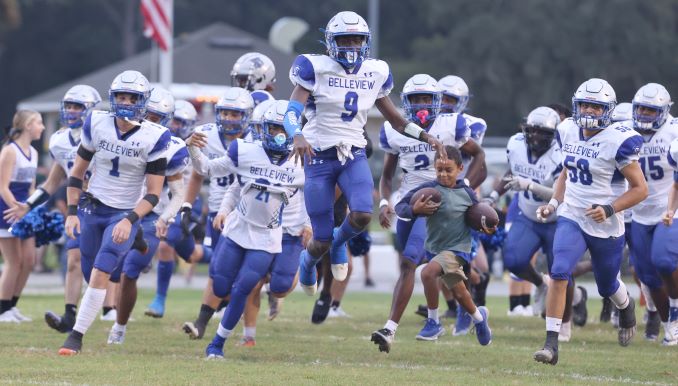 The Dunnellon Tigers and Belleview Rattlers faced off at The Strike Zone at Brent Hall Field on Friday night.

Dunnellon, coming off a district win on just three days earlier versus Hernando had to deal with a Belleview team playing for the first time in three weeks.

Despite the advantage in scheduling, the Rattlers struggles on offense continued and the Tigers used two rushing touchdowns from sophomore running back Dylan Donahoe and a rushing touchdown from junior running back/wide receiver Lacodrick Brown to take home an 18-0 win.

Belleview had the tall task of replacing multiple starters out due to suspension from conduct detrimental to the team and an injury to their starting kicker. Rattlers head coach Brian Lane was adamant that there is no excuses and it’s about the next man up.

“We had a significant amount of players out tonight that could have contributed to the game. We had young players in positions that don’t have a lot of experience. It showed up offensively and we couldn’t get anything going. Hats off to the Dunnellon defense, but we have to find something to get the offense going.,” he said.

Even with the tough loss, Lane saw some positives on Friday night. “Our defense played their hearts out and they kept us in the game.,”

When asked about the younger players getting experience, Lane was happy they showed up ready to play and battled.

“I think you’re going to take your licks. The seven freshman we played tonight, three years from now they will say that this game helped them. We’re going to be good, its my first year here and we’re trying to change the culture. Lots of guys got an opportunity tonight to show us what they’re capable of doing.,” he said.

For Tigers head coach Thomas Sutton, his team is on a roll with three consecutive wins and was pleased with the effort the team gave after playing just three days prior.

Sutton and his coaching staff are breaking in a freshman at quarterback in Dylan Curry and having a dependable rushing attack takes some pressure off Curry when needed.

“That’s what we hang our hat on, to be physical and run the ball. Dylan Curry is getting better and better but still have a ton of work on and he knows that. He’s leading our offense and doing a good job.”

The Tigers offense put the defense into a couple of tough situations due to two lost fumbles and an interception, but the defense held strong and pitched its first shutout of the season.

The loss pushes the Rattlers to 2-3 on the season and will start district play at Leesburg next Friday at 7 p.m. Coach Lane is confident his team will respond and be prepared for battle.

“I expect them to respond how they usually do, we always come back ready to work. I told our guys tonight, our district play opens next week, and we still have everything in front of us.,”

As for the Tigers, the win improves their record to 4-2 on the season and will travel to face Crystal River at 7 p.m. next Friday. The goals at practice next week are clear for Sutton and his team.

“The beautiful thing about what this place is built on is its about us. We worry about us Monday through Thursday. Obviously, we line up to what the other team does but we just focus on being the best version of ourselves.”