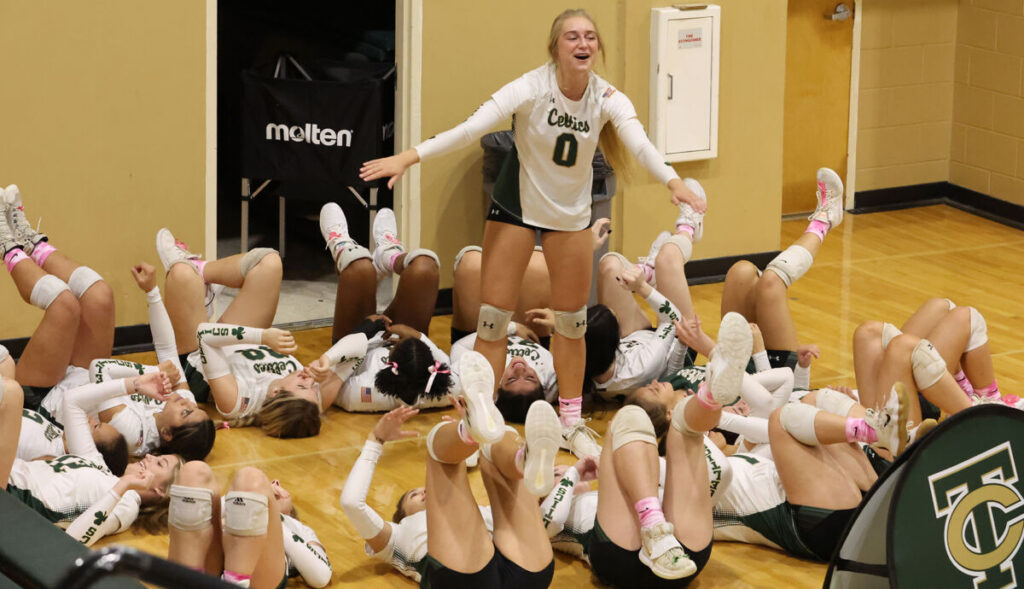 The Trinity Catholic volleyball team tuned up for next week’s district tournament by cruising past Leon (Tallahassee) in straight sets by scores of 25-9, 25-11 and 25-15 on Tuesday night.

The loss dropped Leon to 5-18 on the season, while the win, on a night Trinity Catholic honored six seniors, was its 10th in a row and improved the Celtics to an impressive 14-3 on the season.

“We’re working really hard to try and compete at a level and stay at a level and whoever comes into our gym we’re trying to make sure we play the best we can that night, and tonight we did that,” said Trinity Catholic veteran coach Jeff Reavis. “It’s senior night with six seniors and you have tears and all of that stuff, but you still have to turn around and play a game and I thought we did a really good job of that.”

Trinity Catholic came out focused from the first point of match and jumped out to an 18-7 lead in the first set as senior outside hitter Kiana Laborde had four of her match-high18 kills.

Leon, which was paced by junior outside hitter Amelia Haggins’ six kills, tried to make a run, but Trinity Catholic kept the offensive pressure on as junior middle hitter Rose Gravel found the floor with a pair of spikes and teamed with senior Ameila Fitzpatrick for a block to give the first set to the Celtics.

Leon was much more competitive in the second set as Haggins and Sydni Hunter scored points at the net as the Lions trailed 14-10.

Trinity Catholic went on an 8-0 run behind three service aces from junior Cole Crews and excellent play at the net by junior outside hitter Avery Campise and junior Elayna Johnson.

Leon was able to stop the run momentarily, but the Celtics eased to the second set win.

Trinity Catholic made sure its seniors would have a memorable night by jumping out to an 8-0 lead in the third set as Fitzpatrick had a block and Laborde drilled several kill shots past the Lion defenders.

Leon mounted a rally to pull within 13-8, but Trinity Catholic flexed its muscles and pulled away as Laborde had a dink shot and a pair of spikes and Johnson added a block and spike of her own.

Trinity Catholic finished with a flourish as junior Hope Willis had a block and a spike and senior Shyanne Marker had a service ace to give the Celtics the set and match.

Trinity Catholic closes the regular season out with a road match at state powerhouse Santa Fe on Thursday night. The Celtics begin defense of their Class 3A-District 4 championship next week.

“I’m really excited about this group,” coach Reavis said. “I haven’t talked about it very much this season but everyone is back and it’s just a whole different animal. It’s exciting and scary good sometimes. Santa Fe will be a good match for us and then we’re just going to concentrate on being competitive and see where it takes us.”