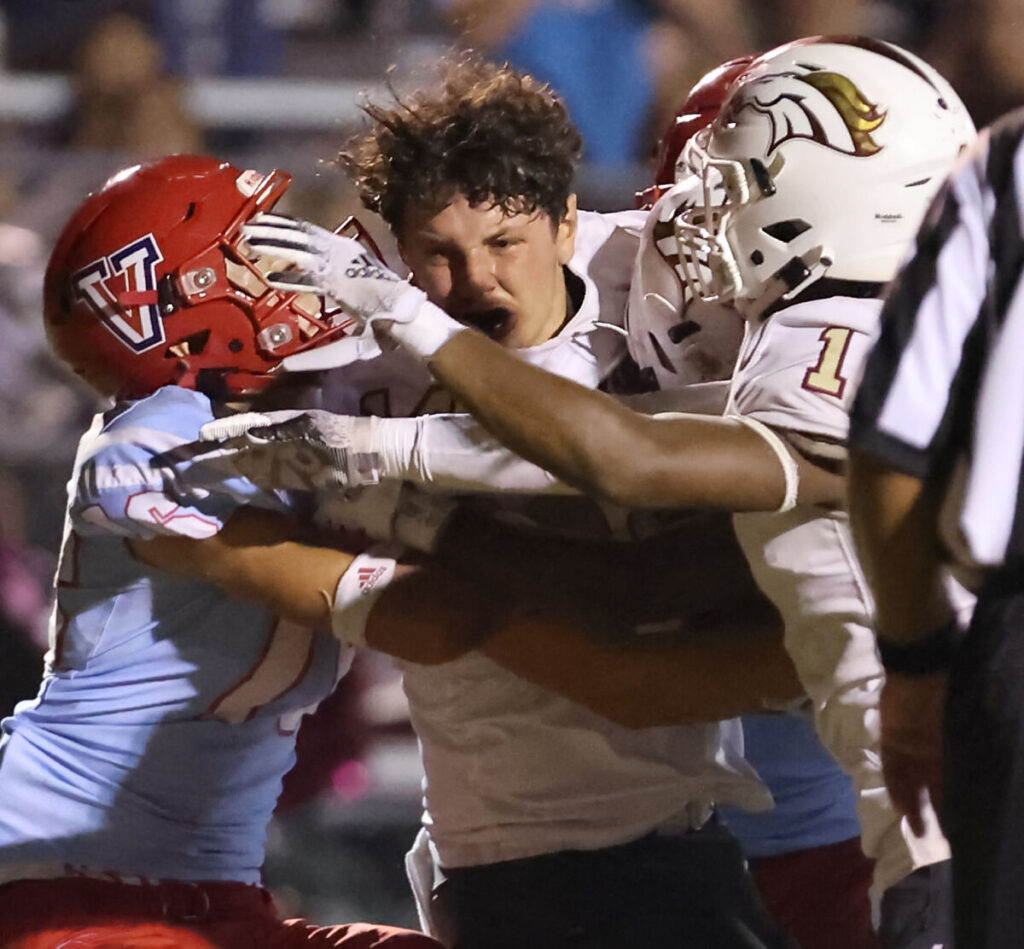 North Marion’s quarterback AJ Cussins (14) loses his helmet as he is hit by Vanguard’s Riley Smith (16) as Cussins drives for the end zone during a football game at Booster Stadium in Ocala, Fla. on Friday, Oct. 7, 2022. North Marion won the game 18-17. [Bruce Ackerman/Ocala Gazette] 2022.

For years, North Marion and Vanguard has been one of the most intense rivalries in the central part of Florida because both programs are consistently good and have rosters full of college-level talent.

Friday night at Booster stadium featured a reeling Colts team that had lost at home the past two weeks and the Knights, coming off a heartbreaking loss to Buchholz on a last-second field goal.

The game had a defensive flavor in the beginning as the teams first four drives combined featured three punts and an interception by Colts cornerback R’Jayvious Johnson. After Johnson’s interception, Colts quarterback AJ Cussins connected with Titus Williams for a 59-yard completion, the longest play of the night for the Colts.

A few plays after the big gain by Williams, senior kicker Serguey Garcia nailed a 20-yard field goal to give the Colts a 3-0 lead early in the second quarter. Vanguard was able to drive into North Marion territory on the ensuing drive but turned the ball over on downs after quarterback Fred Gaskin’s pass attempt on fourth down was incomplete.

On the next play, senior wide receiver Elija Walton, who did not play in North Marion’s loss to Eastside this past Monday, made his presence felt as he won a jump ball for a 28-yard gain on trick play pass thrown by Johnson. Two plays later, Cussins found Walton for a 14-yard gain.

Having Walton back in action played a huge role in getting the stagnant Colts offense back into gear after two weeks of scoring less than 10 points.

“I was ready to go tonight, I was missing out on Monday.,” Walton said. He finished with five receptions for 131 yards and a touchdown.

A late hit out of bounds penalty by the Vanguard defense on third-and-long gave Cussins the opportunity to sneak up the middle for nine yards on fourth-and-one. Williams would score on a two-yard run on the following play, the extra point was blocked and kept the Colts lead to 9-0.

Vanguard had one more opportunity to score before halftime but a sack from junior defensive lineman Antwuan Hampton got the Knights behind the chains and would run out the clock.

The opening kickoff of the second half was the appetizer for a third quarter full of fireworks as junior wide receiver Tay Leslie returned the kick to the Colts 15-yard line. The great field position allowed Vanguard to get on the scoreboard with a 34-yard field goal from senior kicker Matt Gomez.

On the following drive, the Knight defense stepped up and sacked Cussins twice to force a punt. The Colts defense were able to force a punt also but a roughing the punter penalty gave the Knights offense new life and Gaskin would connect with sophomore wide receiver Cameron King for a 28-yard touchdown just four plays later. The extra point gave Vanguard it’s first lead of the night with 51 seconds left in the third quarter.

The Colts answered at a lightning-quick pace with a 20-yard reception by junior wide receiver Kenyon Stocker and a 55-yard touchdown pass to Walton, who was left wide open down the left sideline on a busted coverage.

A mere 15 seconds left in the quarter was plenty of time for Vanguard senior wide receiver Josh Rembert as he returned the ensuing kickoff 80 yards for a touchdown to give the Knights a 17-15 lead heading into the fourth quarter.

North Marion was driving into Vanguard territory when a fumble, recovered by junior defensive end Jawarran Curtis, gave the ball to Gaskin and the offense. Unfortunately, the Knights could not capitalize as they fumbled on the very next play, defensive end Andrew Zock came up with the recovery.

A sack by Knights senior defensive end Riley Smith put the Colts into a precarious situation with third and 14 at midfield. A seven-yard completion to Walton set up a fourth and 7, Cussins would launch a pass down the right sideline and a defensive pass interference flag allowed the Colts to continue the drive.

Five of the next six plays were carries by Williams and Johnson, which set up the go-ahead 21-yard field by senior kicker Serguey Garcia with 3:07 left to go.

Garcia, in his first year of playing football, has never been in the situation of having to make a high-pressure kick that could give his team the lead. Even with the pressure, Garcia was not fazed by the moment.

“When I go up to kick, I just think about kicking the ball through the uprights. I just stay calm, have fun and I like the pressure.,” he said.

With just over three minutes to play, Gaskin and the offense had enough time to drive down the field and take the lead. The Knights offense did just that as Gaskin found senior wide receiver Leonard Hill for a 15-yard gain, Rembert for six yards and then calling his own number for a six-yard run to get a first down.

The Knights had first and ten on the Colts 20-yard line, but a holding call moved them back ten yards. An eight-yard completion to King gave Gomez a 36-yard field goal opportunity. Gomez got enough distance on the kick, but it was wide left by a few feet and sealed the 18-17 win for the Colts.

It is the first time since 2015 that North Marion has won at Booster stadium and Carr was delighted with his team’s efforts following a district loss just four days prior.

On the other end of the tough loss, Vanguard head coach Ed Farmer was in good spirits and is optimistic about the remainder of his team’s season.

“It was a great football game tonight; I didn’t expect no less. It’s just one of those things where it didn’t go our way.,” he said.

He continued, “We got to get focused on districts, we have to win our district outright and we have two (district games) coming up. So that’s where were at right now.”

The Knights fall to 3-3 and will host Tavares next Friday night at 7:30 p.m. Rembert and King were upset with the loss, and both said that tonight is a wake-up call for the team and practice will be intense next week.

For the Colts, they improve to 5-2 on the season and will host West Port next Friday at 7 p.m.

Walton was sure to express that he is happy with the victory but there is more work to be done.

“We’re going to work harder; we can’t settle, and we know what we are capable of doing. We just have to go out there and do it.”