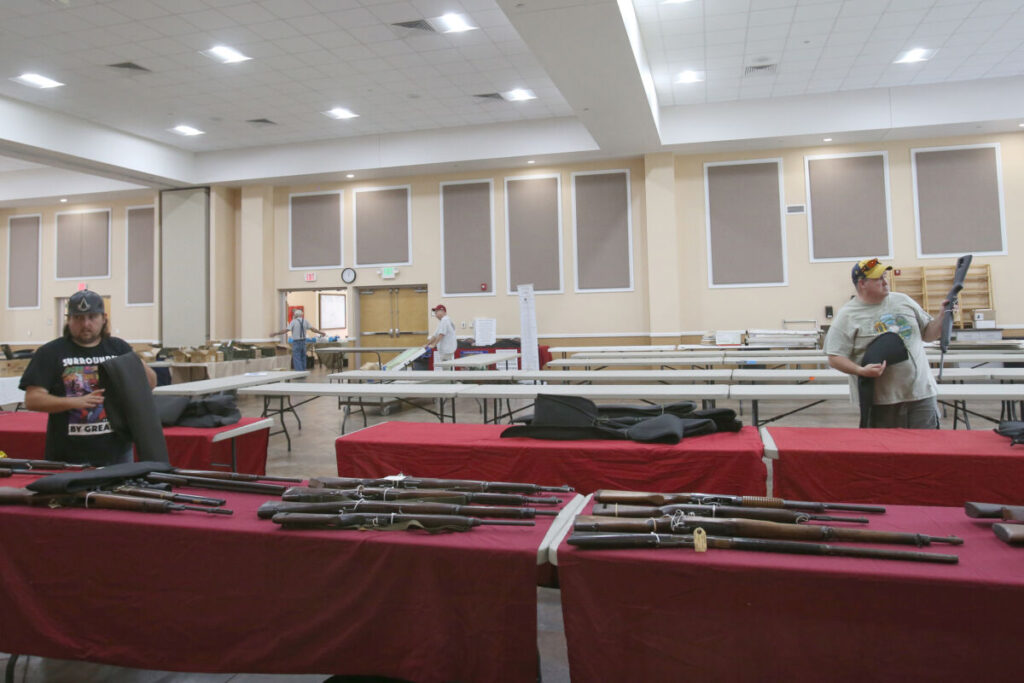 Members of Gun Trader Shows set up guns for a gun show in the Marion County Extension Auditorium at the Southeastern Livestock Pavilion in Ocala on Friday, Nov. 6, 2020. [Bruce Ackerman/Ocala Gazette] 2020.

The Republican-dominated Legislature might not have the votes yet for Gov. Ron DeSantis to push for a major change in Florida gun laws during a special legislative session this month.

DeSantis reaffirmed Tuesday during an appearance in Fort Myers Beach that he expects to eventually sign into law a proposal known as “constitutional carry,” but he wouldn’t put a timeline on when that could occur. “In terms of when? You know, I don’t know.

The Legislature has got to pass it,” DeSantis said. “I mean, I’ve said for years I would sign. I don’t know if they have the votes now. But I know that this is something that a lot of people are going to be looking at as we go forward into this next election.” DeSantis, who is running for re-election this year, said Friday he expects to sign such a measure into law before he leaves office.

Under current law, people who want to carry guns must get concealed-weapons licenses from the state Department of Agriculture and Consumer Services. Constitutional carry would allow people to carry guns without the licenses. Agriculture Commissioner Nikki Fried, a Democratic candidate for governor, oversees the licensing process.

DeSantis contended that the “licensing scheme” allows “people that want to take away your license, these officials, they can do that.” But Fried issued a statement Friday that called DeSantis’ stance on constitutional carry “absurd political pandering from the governor of a state that has experienced some of the worst mass shootings in our country’s history.”

As of April 30, Florida had about 2.52 million concealed-weapons license holders. Lawmakers will start a special session May 23 that has been called to address property-insurance issues.