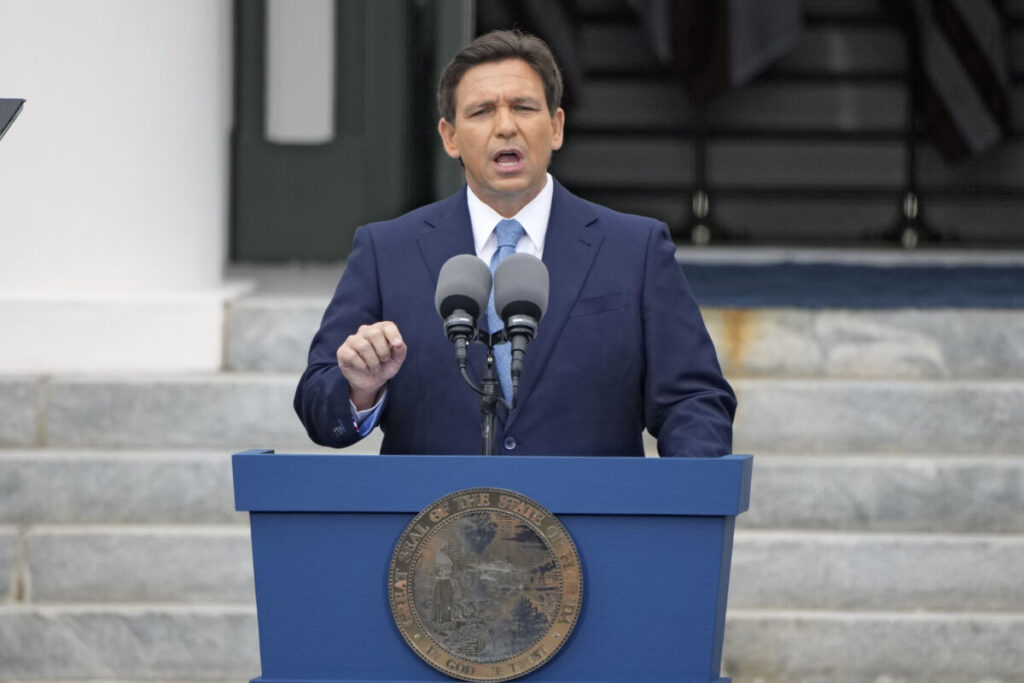 Florida Gov. Ron DeSantis speaks to the crowd after being sworn in to begin his second term during an inauguration ceremony outside the Old Capitol Tuesday, Jan. 3, 2023, in Tallahassee, Fla. (AP Photo/Lynne Sladky)

Gov. Ron DeSantis was sworn in Tuesday to start his second term and gave an inauguration speech. Here are his remarks:

Mr. Chief Justice, members of the Cabinet, and fellow citizens:

From the Space Coast to the Suncoast, from St. Johns to St. Lucie, from the streets of Hialeah to the speedways of Daytona, from the Okeechobee all the way up to Micanopy.

Freedom lives here, in our great Sunshine State of Florida!

Over the past few years, as so many states in our country grinded their citizens down, we in Florida lifted our people up.

When other states consigned their people’s freedom to the dustbin, Florida stood strongly as freedom’s linchpin.

When the world lost its mind — when common sense suddenly became an uncommon virtue — Florida was a refuge of sanity, a citadel of freedom for our fellow Americans and even for people around the world.

In captaining the ship of state, we choose to navigate the boisterous sea of liberty rather than cower in the calm docks of despotism.

We face attacks, we take hits, but we weather the storms, we stand our ground, and we do what is right.

As the Book of Psalms reminds us, “I will not fear though tens of thousands assail me on every side.”

We have refused to use polls and to put our finger in the wind — leaders do not follow, they lead.

We have articulated a vision for a free and prosperous state.

We have, through persistence and hard work, executed on that vision.

We have produced favorable results.

And now we are here today because the people of Florida have validated our efforts in record fashion.

Florida shows that results matter. We lead not by mere words, but by deeds.

Four years ago, we promised to pursue a bold agenda. We did just that and we have produced results:

We said we would ensure that Florida taxed lightly, regulated reasonably, and spent conservatively — and we delivered. 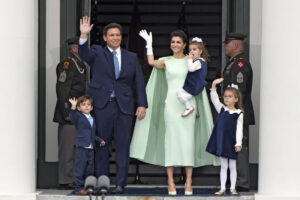 Florida Gov. Ron DeSantis, second from left, waves as he arrives with his wife Casey, right, and their children Mason, Madison, and Mamie during his inauguration ceremony outside the Old Capitol Tuesday, Jan. 3, 2023, in Tallahassee, Fla. (AP Photo/Lynne Sladky)

We promised we would enact big education reforms — and we delivered.

We said we would end judicial activism by appointing jurists who understand the proper role of a judge is to apply the law as written, not legislate from the bench — and we delivered.

We promised to usher in a new era of stewardship for Florida’s natural resources by promoting water quality and Everglades restoration efforts — and we delivered.

We said we would stand for law and order and support the men and women of law enforcement — and we delivered.

We promised to remedy deficiencies in Florida’s election administration and to hold wayward officials accountable — and we delivered.

We said we would support the areas in Northwest Florida stricken by Hurricane Michael — and we delivered.

And when Hurricane Ian came last year, the state coordinated a massive mobilization of response personnel, facilitated the fastest power restoration on record, and even quickly rebuilt key bridges that had been wiped out by the storm. We have stood by the people of Southwest Florida and we will continue to do so in the weeks, months and years ahead.

Because of these efforts and others, Florida is leading the nation:

We are No. 1 in these United States in net in-migration

Florida is the No. 1 fastest growing state

We are No. 1 in new business formations

Florida is No. 1 in tourism

We are No. 1 in economic freedom

Florida is No. 1 in education freedom

And we rank No. 1 in parental involvement in education

This is a record we can all be proud of.

And we are far from done:

Florida has accumulated a record budget surplus, and we need to enact a record amount of tax relief, particularly for Florida families who are grappling with inflation.

We must ensure school systems are responsive to parents and to students, not partisan interest groups, and we must ensure that our institutions of higher learning are focused on academic excellence and the pursuit of truth, not the imposition of trendy ideology.

Florida must always be a great place to raise a family — we will enact more family-friendly policies to make it easier to raise children and we will defend our children against those who seek to rob them of their innocence.

Florida is now in a golden era for conservation of our treasured natural resources. Our momentum is strong and we will finish what we started — we will leave Florida to God better than we found it!

This much we pledge and so much more.

It is often said that our federalist constitutional system — with 50 states able to pursue their own unique policies — represents a laboratory of democracy.

Well these last few years have witnessed a great test of governing philosophies as many jurisdictions pursued a much different path than we have pursued here in the state of Florida.

The policies pursued by these states have sparked a mass exodus of productive Americans from these jurisdictions — with Florida serving as the most desired destination, a promised land of sanity.

Many of these cities and states have embraced faddish ideology at the expense of enduring principles.

They have harmed public safety by coddling criminals and attacking law enforcement.

They have imposed unreasonable burdens on taxpayers to finance unfathomable levels of public spending.

They have harmed education by subordinating the interests of students and parents to partisan interest groups.

They have imposed medical authoritarianism in the guise of pandemic mandates and restrictions that lack a scientific basis.

This bizarre, but prevalent, ideology that permeates these policy measures purports to act in the name of justice for the marginalized, but it frowns upon American institutions, it rejects merit and achievement, and it advocates identity essentialism.

We reject this woke ideology.

We seek normalcy, not philosophical lunacy!

We will not allow reality, facts, and truth to become optional.

We will never surrender to the woke mob.

Florida is where woke goes to die!

Now Florida’s success has been made more difficult by the floundering federal establishment in Washington, D.C.

The federal government has gone on an inflationary spending binge that has left our nation weaker and our citizens poorer, it has enacted pandemic restrictions and mandates — based more on ideology and politics than on sound science — and this has eroded freedom and stunted commerce.

It has recklessly facilitated open borders: making a mockery of the rule of law, allowing massive amounts of narcotics to infest our states, importing criminal aliens, and green lighting the flow of millions of illegal aliens into our country, burdening communities and taxpayers throughout the land.

It has imposed an energy policy that has crippled our nation’s domestic production, causing energy to cost more for our citizens and eroding our nation’s energy security, and, in the process, our national security.

It wields its authority through a sprawling, unaccountable and out-of-touch bureaucracy that does not act on behalf of us, but instead looms over us and imposes its will upon us.

The results of this have been predictably dismal.

This has caused many to be pessimistic about the country’s future. Some say that failure is inevitable.

Florida is proof positive that We the People are not destined for failure.

Decline is a choice. Success is attainable. And freedom is worth fighting for.

Now fighting for freedom is not easy because the threats to freedom are more complex and more widespread than in the past — the threats can come from entrenched bureaucrats in D.C., jet-setters in Davos, and corporations wielding public power.

But fight we must.

We embrace our founding creed that our rights are not granted by the courtesy of the State, but are endowed by the hand of the Almighty.

We reject the idea that self-government can be subcontracted out to technocratic elites who reduce human beings to mere data points.

We insist on the restoration of time-tested constitutional principles so that government of, by and for the people shall not perish from this earth.

Florida has led the way in preserving what the father of our country called the “sacred fire of liberty.”

It is the fire that burned in Independence Hall when 56 men pledged their lives, their fortunes and their sacred honor to establish a new nation conceived in liberty.

It is the fire that burned at a cemetery at Gettysburg when the nation’s first Republican president pledged to this nation a “new birth of freedom.”

It is the fire that burned among the boys who stormed the beaches of Normandy to liberate a continent and to preserve freedom for the world.

It is the fire that infused a young preacher’s dream, relayed at the steps of the Lincoln Memorial, that the Declaration of Independence said what it meant and meant what it said: all men are created equal.

It is the fire that led a resolute president to stand in Berlin and declare “tear down this wall,” staring down the communists and winning the Cold War.

It is our responsibility here in Florida to carry this torch.

We do not run from this responsibility; we welcome it.

We will be on our guard.

We will stand firm in the faith.

We will be courageous.

We will be strong!

And we thank God and are proud to be citizens of the great Free State of Florida!