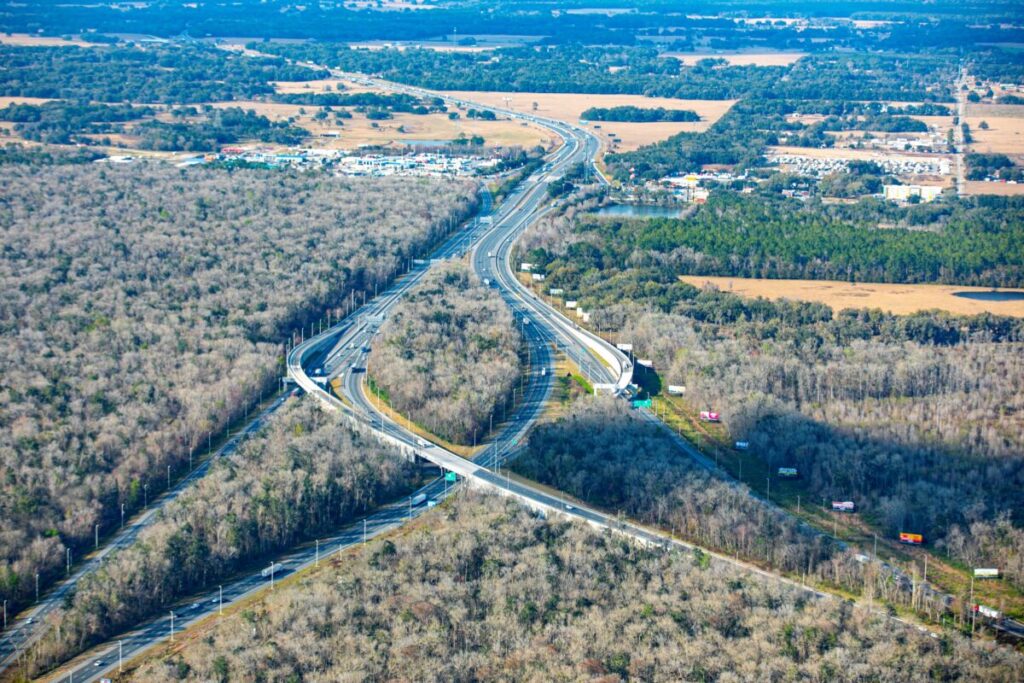 The Turnpike meets with I-75 near Wildwood The Florida Department of Transportation is planning a turnpike extension with two of the proposed routes going north from here. Wednesday February 2, 2022. [Alan Youngblood/Special to Ocala Gazette]

The Florida Department of Transportation (FDOT) received nearly 4,000 public comments, had more than 50,000 visits to its website and hosted 36 well-attended public meetings during its months-long study of a possible Northern Turnpike Extension.

The statistics are included in the final report and status of an Alternative Corridor Evaluation (ACE) conducted by Florida’s Turnpike Enterprise, part of FDOT, that assessed extending the turnpike northwest along four potential corridors from its end in Wildwood near Interstate 75.

As required, the final report was sent Dec. 27 to Gov. Ron DeSantis, as well as to the heads of both chambers of the Florida Legislature.

The four potential routes traversed through parts of Citrus, Levy, Marion and or Sumter counties, with three of the routes running through areas of Marion.

In August, the project was abruptly halted after intense backlash from residents, local governments, grassroots organizations and environmental groups in the four counties affected, with FDOT stating it had completed its study without recommending a route and would not pursue the project any further until options could be reassessed to address the concerns raised.

Instead, the State said it would prioritize improvements to I-75 as a critical enhancement to regional mobility and reliability, as suggested in feedback.

While FDOT’s announcement was enthusiastically embraced by opponents of the extension, some said it did not go far enough. Most advocate a “No Build” option.

“We still have a lot of questions about this ‘pause,’” said the No Roads to Ruin Coalition, one of the most vocal critics of the potential extension, on its website after the news. “But collectively, using the grassroots power of local residents, the resources of small and large organizations and businesses around the state, we can stop these ‘roads to ruin.’”

The final report reinforces the success of the widespread opposition to the project and FDOT’s commitment to widening or improving the busy north-south interstate, and noted high projected growth northbound at State Road 44 in Sumter County to Ocala and through to the Alachua County limits

In the report, FDOT said: “Improvements to Interstate 75 are a critical component to the success of any northern extension of the Florida turnpike.”  The ACE report further recommended FDOT initiate a regional study of need and include an emphasis on complementing I-75 and other regional transportation improvements within the study area.

“There’s a lot of bang for the buck in building new turnpike toll lanes on I-75 but they need to be separated,” Charles Lee, director of Advocacy for Florida Audubon said in a July interview with the Gazette.

“That’s what they did with the I-4 Ultimate project and it’s working fantastic,” he said.

The proposed turnpike extension is a result of Senate Bill 100, which repealed the 2019 M-CORES (Multi-use Corridors of Regional Economic Significance) toll road mandate that required FDOT to build three new turnpikes in 2023, but still allowing FDOT to evaluate a new northern extension of the turnpike.

FDOT began the study in October of 2021, publicizing the four potential corridors of the proposed extension and asked for public and community feedback. Proponents said the extension would facilitate evacuations during hurricanes, address traffic congestion and increases in traffic due to Florida’s rapid growth.

Backlash was swift and robust however, with residents and environmental groups saying any or all the possible routes would ruin their way of life as well as destroy the area’s critical wildlife and natural resources. Eight city or county governments unanimously adopted no-build resolutions.

All four proposed corridors began at the northern end of the turnpike and headed northwest to the future location of the Suncoast Parkway or U.S. Highway 19/98. The potential routes ranged from 42-to 81-miles-long, with the longest extending all the way to Chiefland.

One route cut through the heart of the historically Black community of Royal in Sumter County, near U.S. 301, founded in 1865 by freed slaves, who each received 40 acres of land under an order by Gen. William Tecumseh Sherman. It is one of Florida’s oldest African American communities and has a cemetery.

FDOT said in its report that as it continues to refine and develop viable corridors for the area, “it will prioritize engagement to avoid communities and other resources that have substantial cultural, historic, or other significance.”

“The goal of every project is to ensure all needs are met, environmental concerns are addressed, and community characteristics are protected,” the report said.