Creating a Florida scrub-jay conservation safe haven in the Greenway 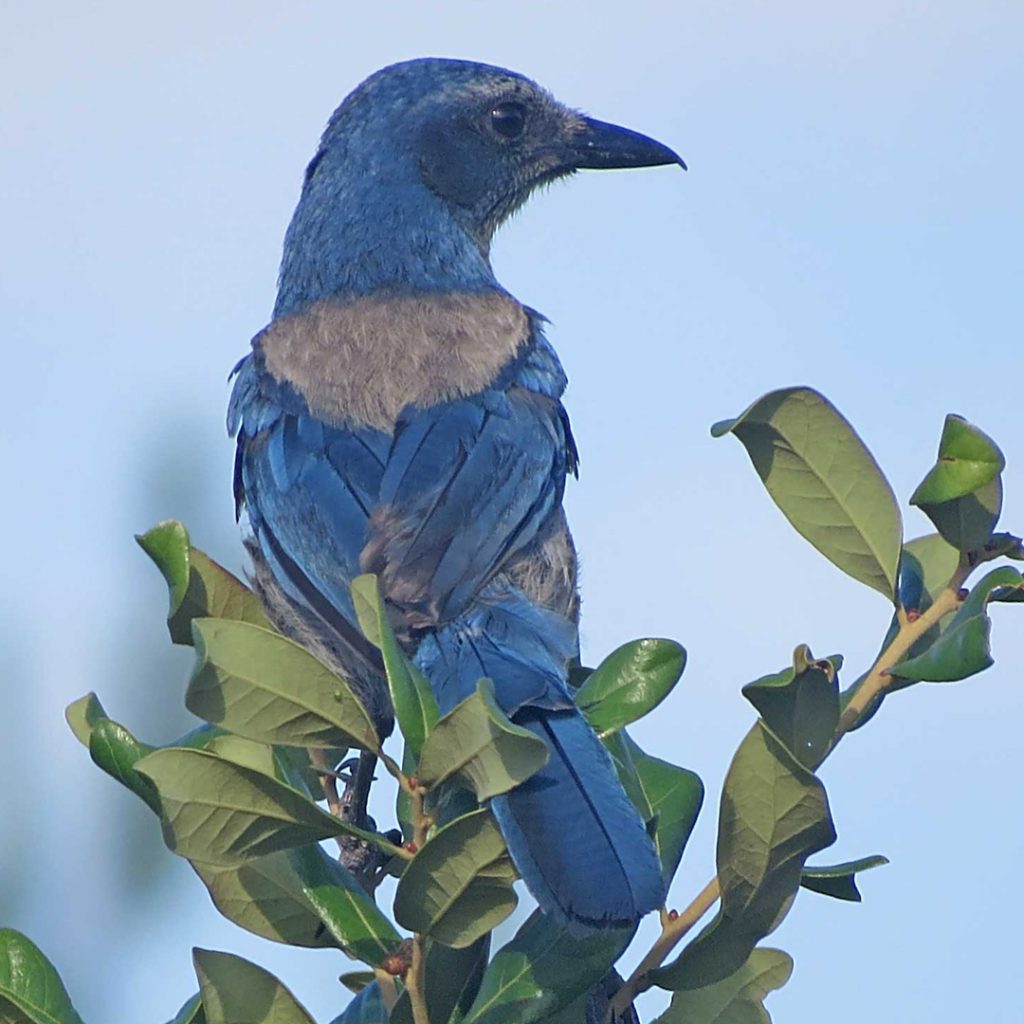 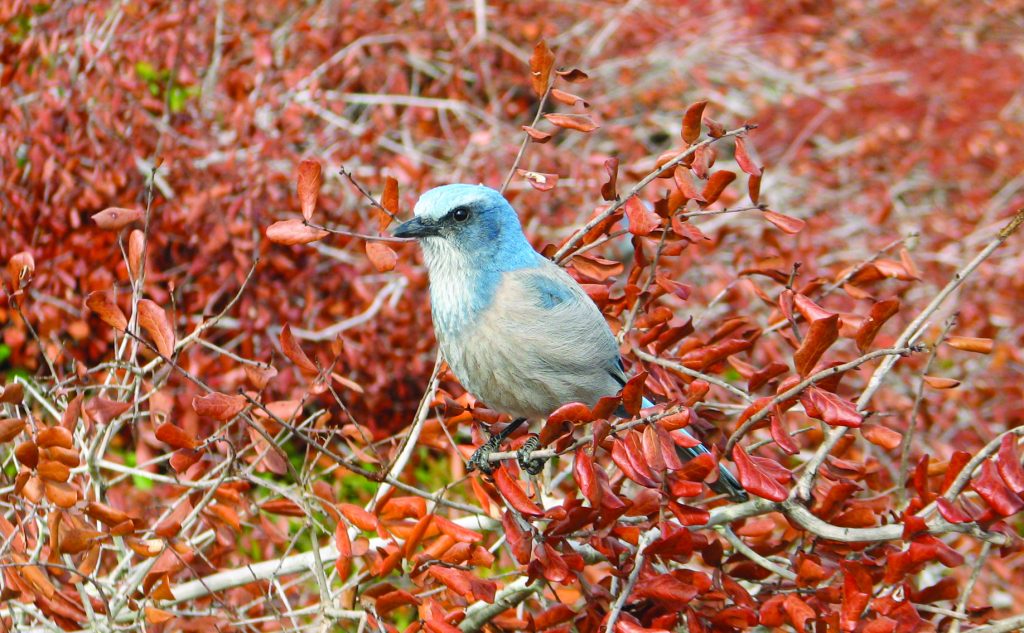 While the mockingbird is the official Florida state bird, a good argument can be made for the Florida scrub-jay to be awarded honorary status. Most notably, the distinctively-marked blue and gray crestless jay is the only bird species that is endemic to the state.

Unfortunately, due to the continuing loss of its scrub-oak specific habitat to development, Florida’s unique jay is also a Federally-designated threatened species. But there is some local good news on that front. Tucked away deep in the Ocala/Marion County section of the Marjorie Harris Carr Cross Florida Greenway is a thriving Florida scrub-jay habitat, 16 years in the making.

The Cross Florida Greenway (CFG), commonly known as the Greenway, became a Florida state park in 2012. 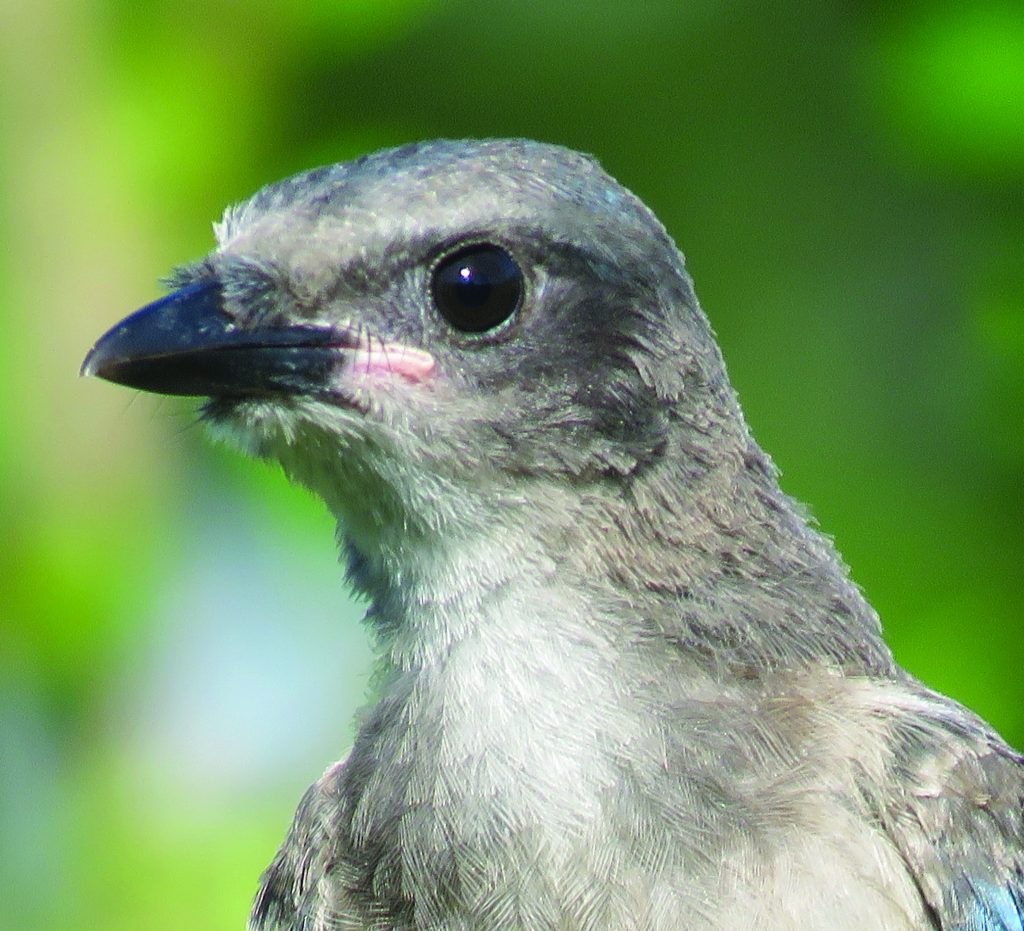 It is operated by the Florida Department of Environmental Protection, Division of Recreation and Parks.

“In 2001, the state through the Florida Forever program purchased 446 acres that was adjacent to the Greenway. At the time of the purchase, we were not even aware there were Florida scrub-jays living on that land,” said CFG Manager Mickey Thomason. “In 2004, we contracted the Florida Natural Areas Inventory to conduct a Greenway-wide natural community study. Based on that report, we began the process of scrub areas restoration by removing sand pines. In 2006, a CFG employee spotted scrub-jays on the site. A follow-up preliminary survey by the Florida Fish and Wildlife Conservation Commission found eight birds, which were banded for identification purposes. And that’s how the Greenway’s Florida scrub-jay habitat officially began.”

As more overgrown scrub-oak areas were restored over the years, the Greenway’s Florida scrub-jay habitat has grown to nearly 900 acres. From those initial eight birds, this August’s annual banding count has the scrub-jay population now at 144. 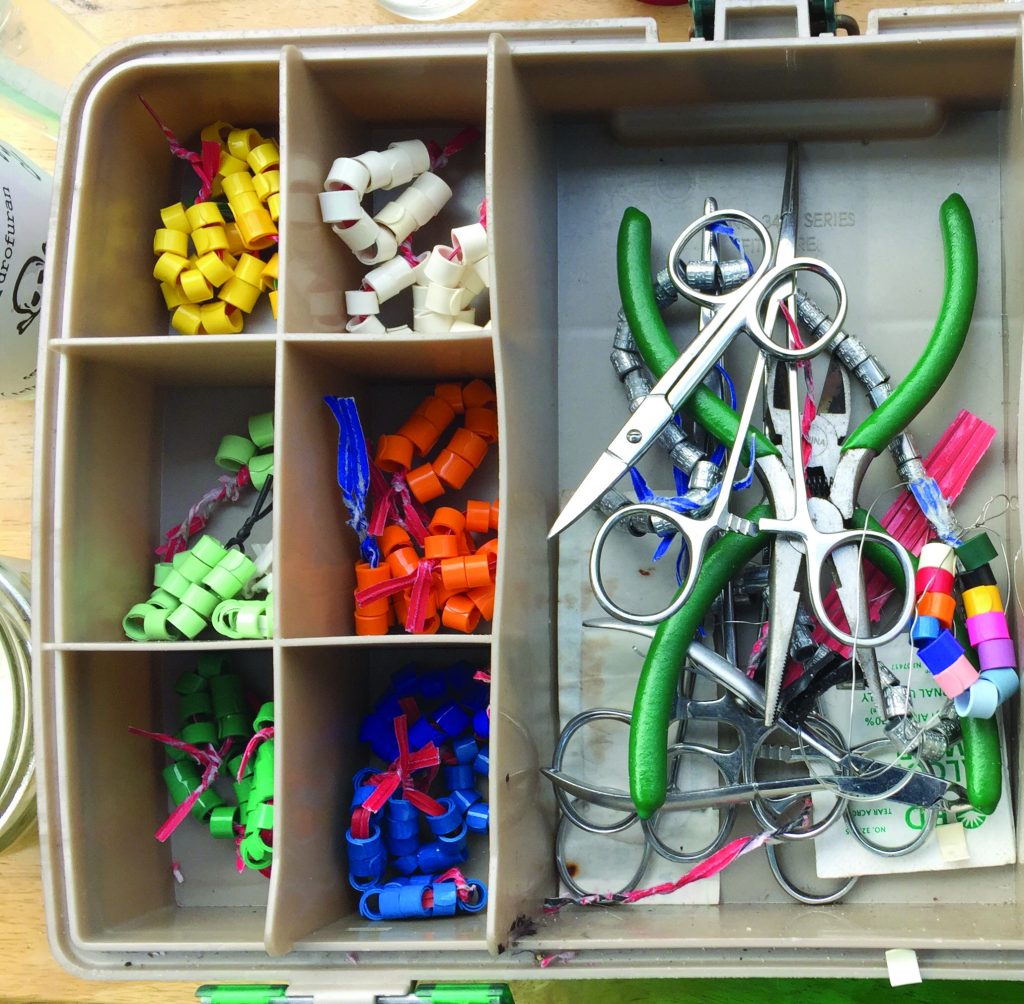 Laurie Dolan, a Florida DEP Environmental Specialist II, has been involved with the Florida scrub-jay habitat project on the Greenway from the beginning.

“When we started the habitat project, I knew nothing about the Florida scrub-jay other than what I had learned in school and from other land managers,” said Dolan, who has a master’s degree in forestry from the University of Florida and has worked on various Greenway projects since 1999. “But the more I learned about these birds and the more time that I spent around them, I became passionate about our conservation efforts. Florida scrub-jays are such a unique bird with a distinctive personality. They are not an easy bird to manage, but they are so worth the effort.”

The biggest issue with the Florida scrub-jay is that they are such a habitat-specific bird, requiring sandy, scrubby areas with 3-10-foot tall acorn-producing scrub oaks to thrive. They do eat  such creatures as insects, mice, lizards, frogs, but the scrub oaks provide their main food source of acorns in the fall and winter. Scrub-jay families consist of a breeding pair and up to six non-breeding relatives. Homebodies, scrub-jay families establish permanent lifetime territories of 22 to 24 acres. 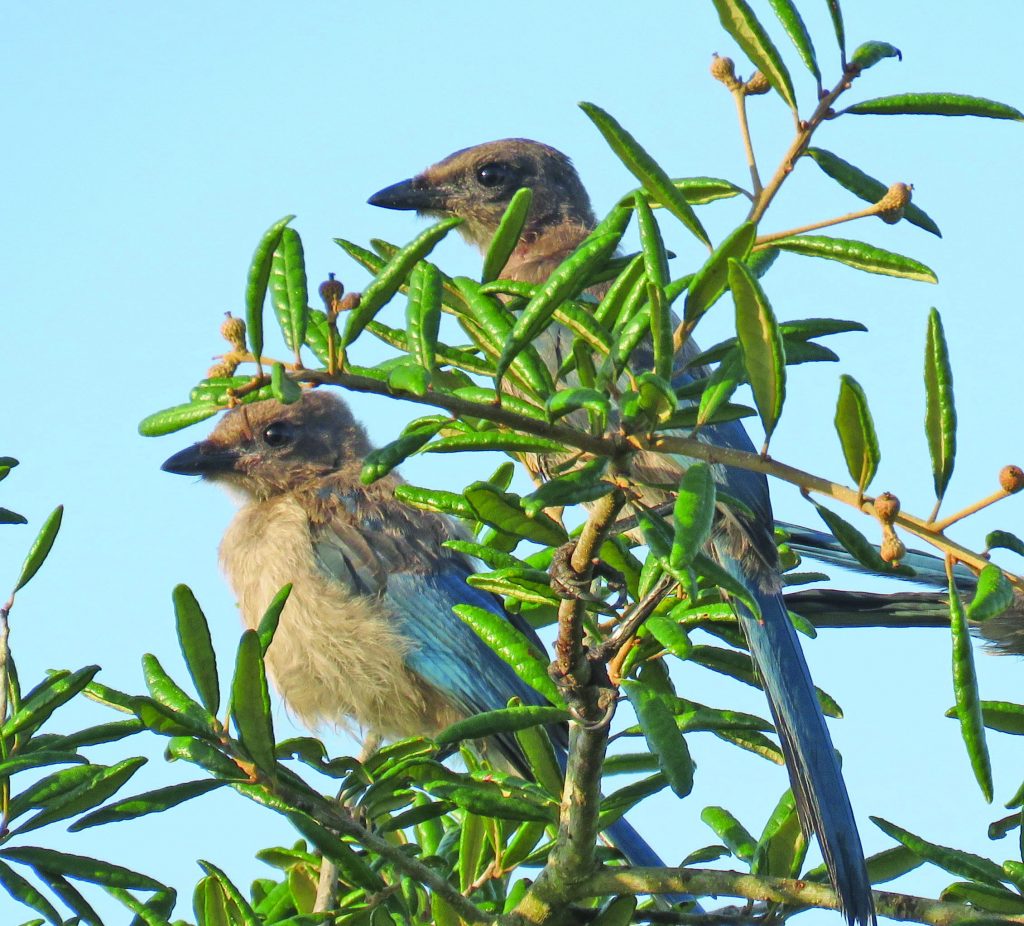 They breed from March to June, building nests from twigs and palmetto fibers 3-10 feet off the ground in the scrub oaks; average clutch size is two to five eggs per nesting. The youngsters typically remain with their family as helpers for a year or more. Young females eventually leave to search for unattached males to establish new territories.

“Unlike most other birds, the adult male and female Florida scrub-jays look exactly alike in color and are of comparable size. The baby birds have brown-feathered heads that turn blue as they mature,” said Dolan. “Full grown, they are about the size of a robin and their scratchy screech sounds like a cross between a blue jay and a crow. The only way to identify a female is by her unique hiccing call, which you have to be very lucky to actually hear.”

Dolan also noted that “scrub-jays are low-flying birds that spend a lot of time on the ground, hopping around looking for insects and acorns.” 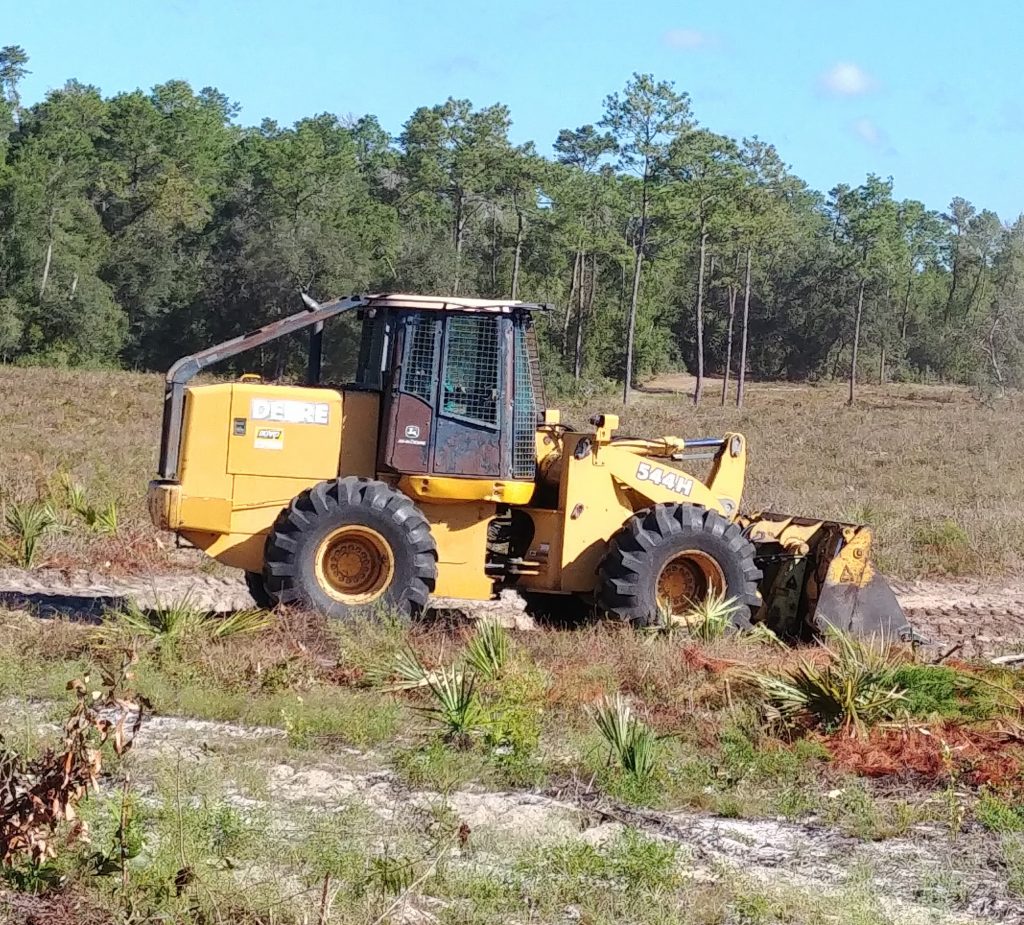 Natural predators of the Florida scrub-jay include Cooper’s hawks, snakes, bobcats and coyotes.

“Prescribed burning is the go-to for habitat management, but our Greenway habitat doesn’t lend itself well to that because of its location. We primarily use targeted mowing and patch removal of sand pines to not give predator birds a perch. I call the sweet spot of scrub-jay habitat management—always having usable habitat that’s neither too tall nor too short,” said Dolan. 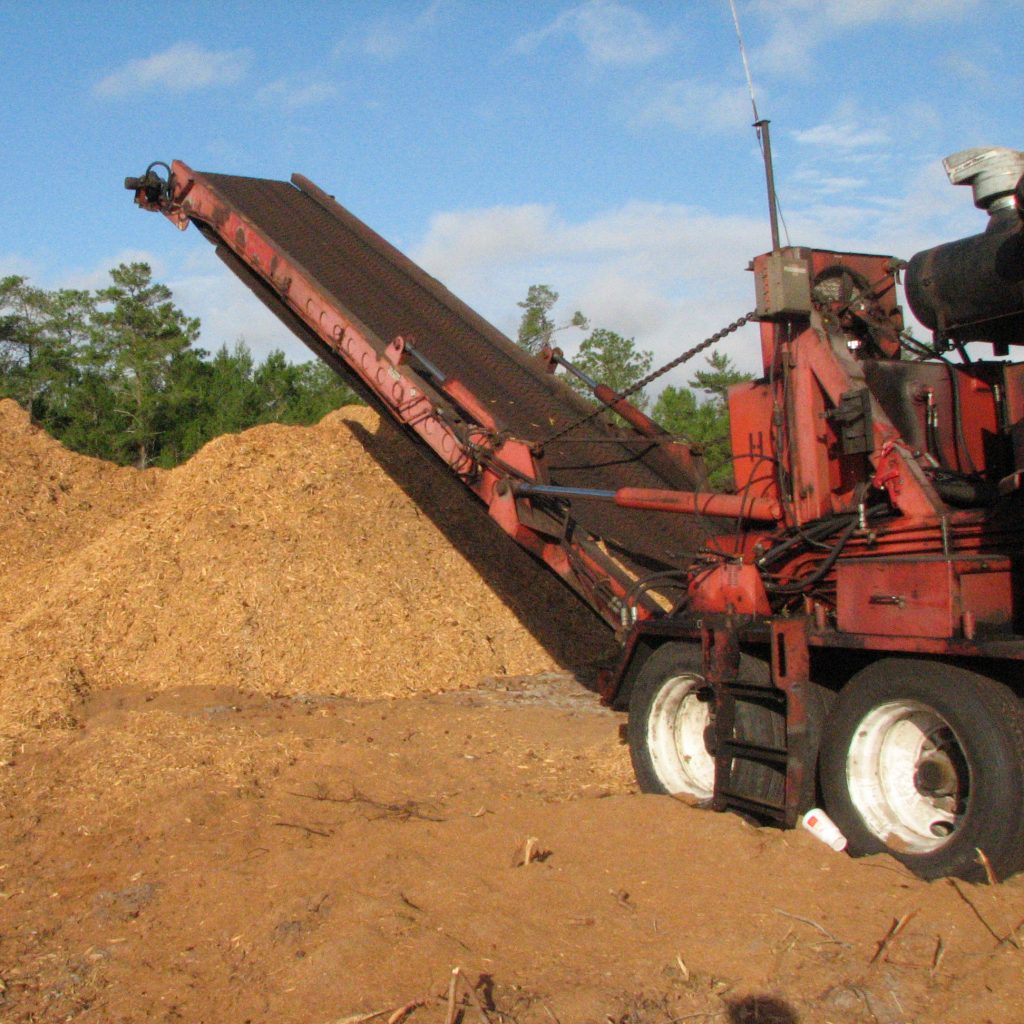 “And we are also very fortunate to have a great team of collaborators to help us with the habitat management.”

“Looking back, I could not have imagined how much time and effort it would take to reach this success level. Nor could I have imagined how much pure joy has come from this project,” said Dolan. “The ultimate goal is to keep attracting more Florida scrub-jays to our habitat until we reach capacity. Then, hopefully, we can be considered a donor site to help other habitat locations increase their population.”