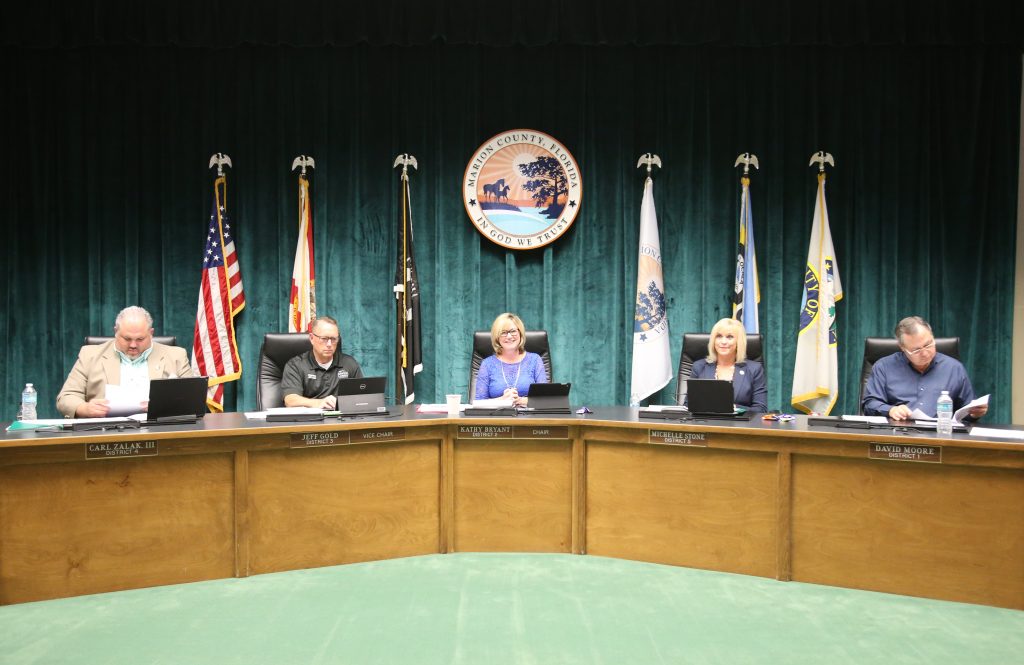 Members of the Marion County Commission get prepared for the start of a zoning and planning meeting on the Double Gate ATV Park at the Marion County Commission auditorium in Ocala, Fla. on Wednesday, June 17, 2020. Blitch Plantation, Ltd. and International Property Services, the owners of 240 acres are proposing a large ATV park near the intersection of County Highway 329 and County Highway 318 in Flemington. The members of the County Commission are, from left: Carl Zalak, Jeff Gold, Kathy Bryant, Michelle Stone and David Moore. [Bruce Ackerman/Ocala Gazette] 2020.

Marion County commi-ssioners have moved closer to revamping their garbage disposal deal to extend the life of the original contract — and will raise dumping rates locally to do it.

The board met Tuesday to discuss adding capacity – or “airspace” in the lingo of the solid waste industry – to its existing contract.

In 2011, the county reached a deal with the operator of a private landfill in Sumter County to pay $8 a ton to drop up to 2.5 million tons of garbage over 30 years. That amounted to $20 million total.

Marion County could dump until it maxed out the tonnage or the contract expired, whichever came first, once it started using the landfill, which occurred last year.

But just over a year into trucking trash south, county officials believe an unanticipated increase in waste generated by businesses is eating up the available airspace.

County Environmental Services Director Jody Kirkman estimates his department will ship 142,000 tons to Sumter County this fiscal year, which is about 11 percent more than the county handled when the deal was signed.

Analyzing the trend, Kirkman projected that Marion County would be out of airspace by 2034 — seven years ahead of the expiration of the contract.

At a workshop on Tuesday, commissioners tentatively backed a supplemental seven-year contract that allows for another 140,000 tons over that time.

Based on current trends, that buys the county an additional eight months or so.

Under the proposed agreement, the per-ton rate would triple the county’s original charge.

To help offset this cost, the board is entertaining raising its “gate rate,” or what it charges people to dump at Baseline Landfill.

Commissioners expressed support on Tuesday for implementing that by Oct. 1.

The change does not affect the $87 yearly assessment charged to county homeowners for garbage disposal.

Nor does it affect residents or businesses within the city of Ocala, which uses an Ocala-based private transfer station for disposal service.

But the increase might affect rates the county’s franchise haulers charge to business customers that appear to be driving the surge in commercial waste.

Despite the significantly higher per-ton cost, Kirkman said this was the best the county could do for the moment. The landfill operators in Sumter County, Heart of Florida Environmental, are reluctant to commit beyond seven years because of uncertainty about the future.

“You get the best deal you can right now,” he said. “It’s not just the best time to negotiate with them because they can’t see what their costs are in two, three, five, 10 years.”

The board believes this supplemental contract will be a placeholder. Commissioners expect to revisit this agreement in two years or so in the hope of cementing a longer-term deal with Heart of Florida.

The board, however, anticipates saving money on garbage disposal by rebidding the contract for hauling garbage to Sumter County.

The hauling contractor, Merrell Brothers, charges about $12 a ton.

County staff indicated that a better rate likely awaits when a new contract is awarded. The current one expires in 2022, but commissioners encouraged staff to start looking for a better deal now.

While it’s unclear where the increase in commercial waste is coming from, the county’s transfer station at Baseline Landfill seemed a more attractive option for companies that handle commercial waste. Its gate rate was $3 per ton less than its main competitor, a private dump in Ocala owned by Advanced Disposal.

The higher gate rate may reduce the volume of commercial trash at Baseline Landfill. But that would benefit county homeowners by slowing the pace of business refuse filling the county’s airspace at the Sumter County dump.