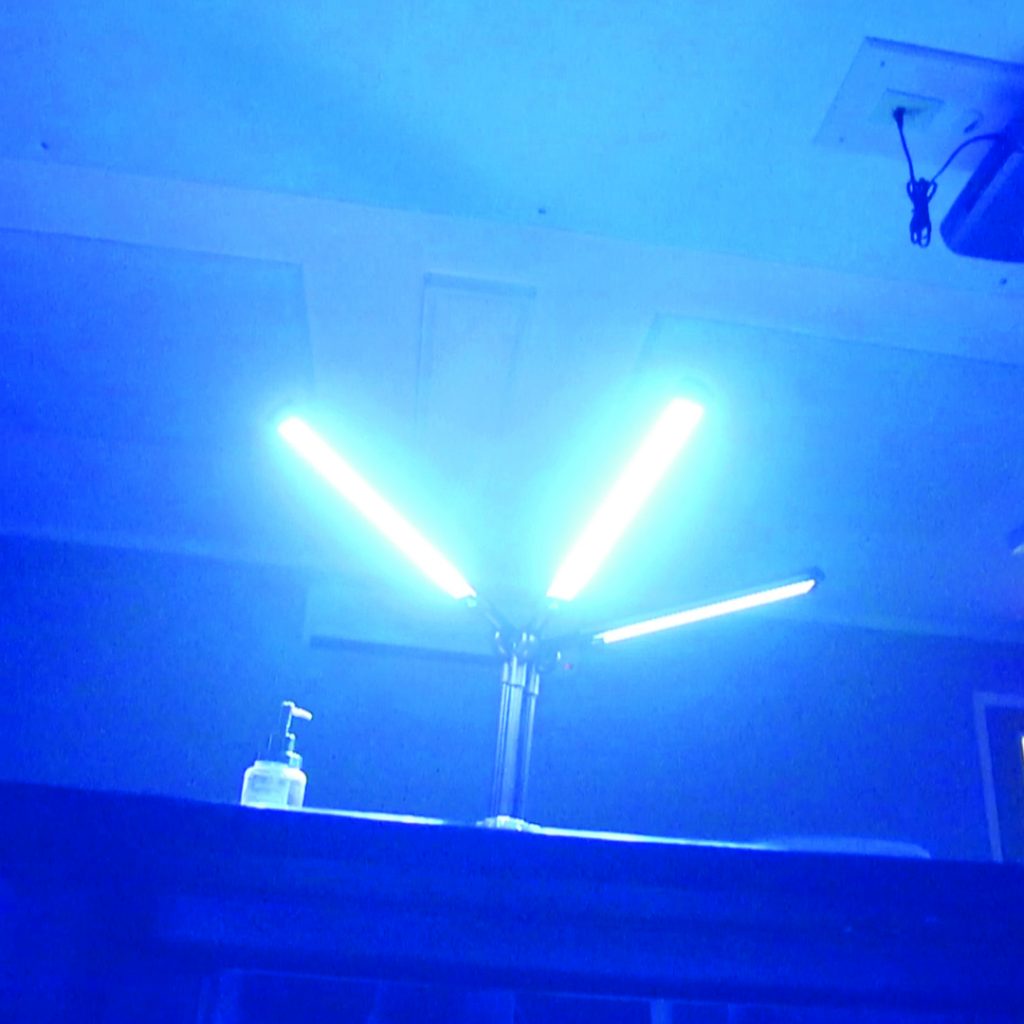 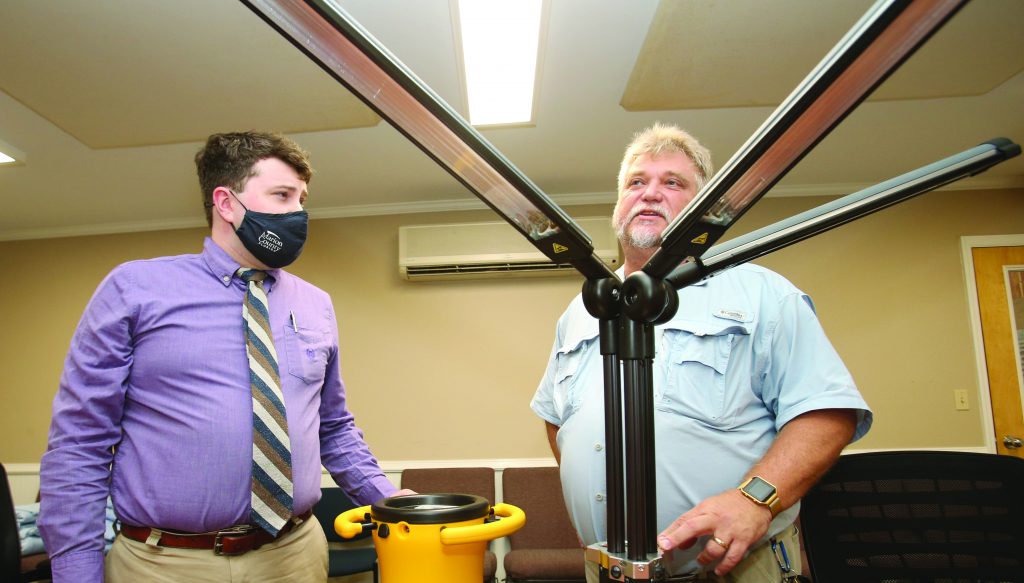 Alex Aubuchon, the Public Information Officer for the Marion County Commission, left, and Mike Bates, the Marion County Operations Manager, right, talk about the MoonBeam3 Disinfection Technology made by Diversey unit at Marion County Facilities Management. The machine has 3 lights that emit UVC radiation for 3 minutes which kills bacteria and viruses on surfaces including COVID-19. The county has three of the machines and use them whenever an employee either has tested positive for the coronavirus or is suspected of having been exposed to it. Marion County has 12 more of the units on order. The Marion County Sheriff’s Office has also requested several of the MoonBeam units, which are on order. The technology has been proven to effectively combat viruses and bacteria in hospital operating rooms.

In the relatively early days of the COVID-19 outbreak, President Donald Trump once drew jeers and eye rolls when he suggested that the virus could be treated with ultraviolet light.

Then it slowly leaked out that researchers were looking into UV light as potential COVID remedy. In July, three months after Trump’s initial remark, The Washington Times reported that “evidence shows that germ-killing UV light can inactivate airborne microbes that transmit tuberculosis, measles, influenza and SARS-CoV-1, the coronavirus responsible for the 2002-2003 SARS outbreak.”

That sparked thinking among scientists about whether UV rays could be COVID killers.

Yet that also was about the time that Marion County officials bet, and bet big, on UV light to eradicate the threat of the coronavirus in county offices.

Mike Bates, operations manager for the county’s Facilities Management Department, which is responsible for maintaining nearly 300 public buildings around Marion County, said the county plans to buy at least a dozen more.

“It’s like a tanning bed on steroids,” said Alex Aubuchon, a county public information officer, during a demonstration of the MoonBeam at the McPherson Governmental Complex.

“It can kill any sort of virus, bacteria, or germ that happens to be living in the environment.”

Each bulb projects ultraviolet-C light, or UVC, the most powerful form of UV radiation, over an area of nearly 80 square feet. 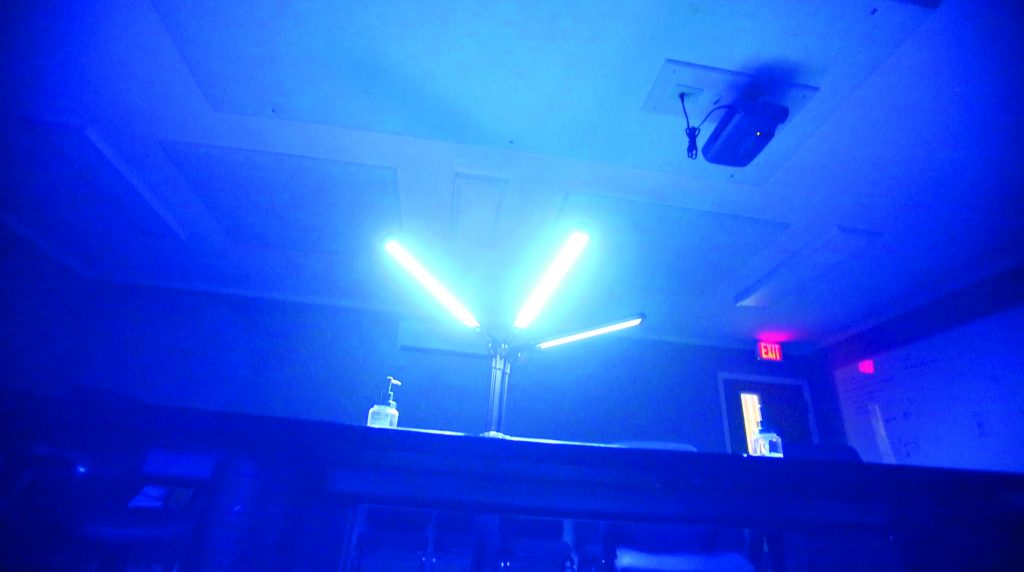 The MoonBeam3 Disinfection Technology made by Diversey unit is shown disinfecting a table during a demonstration at Marion County Facilities Management.

The U.S. Food and Drug Administration recommends against direct exposure to UVC light because it can “cause severe burns of the skin and eye injuries.”

The light stand is powered by controls on a 3-foot-high canister that operates the bulbs via Bluetooth. That allows operators to be up to 40 feet away when using the MoonBeam.

Bates said the system can disinfect the targeted area in just three minutes.

Bates is the county’s resident expert on the equipment. He said he deeply researched the MoonBeam in evaluating several types of anti-COVID products, and came away convinced it is perhaps the most effective tool in the county arsenal for coronavirus. His confidence level was bolstered after learning numerous hospitals had used the MoonBeam over the last couple of years, he said.

“It fit our need to combat COVID,” he said.

The system, which Bates said has been used about two dozen times so far, has several advantages, especially for county offices with considerable public interaction.

According to county spokeswoman Stacie Causey, 10 county staffers on average are tested and sent home to quarantine each week due to any one, or a combination, of COVID symptoms.

When county officials believe it necessary to bring in the MoonBeam, the workspace is zapped, and in just minutes, staffers can return to work in the now-disinfected area. 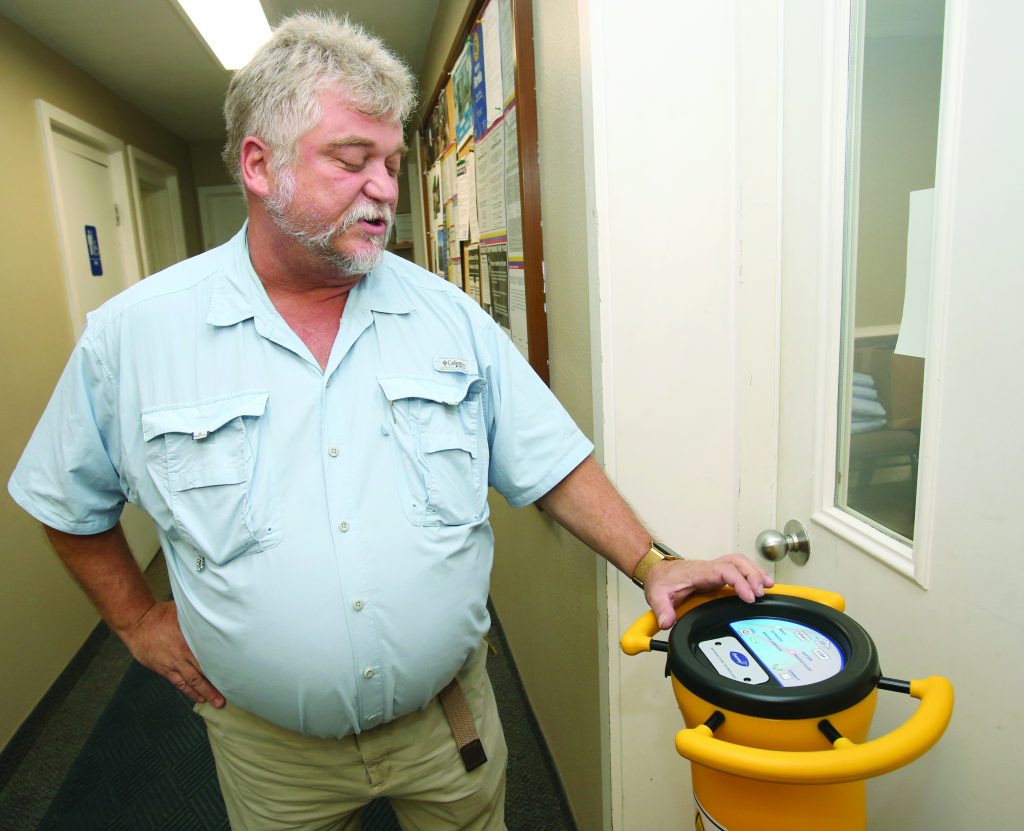 That saves from having to shut down an office for hours, if not an entire day, in order to be sanitized, said Bates.

There is no follow-up method for ensuring it worked, Bates acknowledged. But he said, based on his research, he has faith the MoonBeam does what its makers say it does.

Another advantage is that a work area can be cleaned by a small crew. And in the affected area neither the clean-up team nor the staff there are using or being exposed to harsh chemicals.

The county’s three current MoonBeam systems are housed at the Facilities Management headquarters, the county jail and the courthouse.

Once the next dozen units arrive, Bates said, they will be deployed to other high-traffic, heavily populated work areas. Those include, for instance, a couple of county libraries, the county clerk’s office, the Sheriff’s Office and the county jail.

Given the current price, those units will cost the county $264,000.

Yet, Bates noted, the manufacturer knocked more than a third off the regular $36,000 per-unit price because Marion County agreed to buy in bulk.

And the MoonBeam stands to be a lasting value.

The company says on its website that changing light bulbs is the only required maintenance.

Bates said the units should last for the foreseeable future, since the bulbs have an 8,000-hour lifespan and are used only minutes at a time.

Aubuchon, the county spokesman, noted the MoonBeams will come in handy for “public-facing” county offices during the upcoming flu season.

“We’ll get a lot of value out of this equipment,” he said.