Does this photo of County Commissioner, Carl Zalak look like a campaign moment to you? 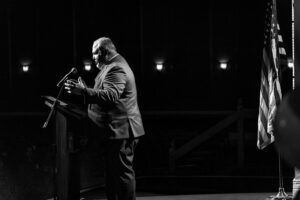 Photo of Carl Zalak giving the State of the County address at the CEP breakfast. [Source: Marion County Facebook page]

It does to us. The photo was taken by county staff while the commissioner was giving the State of the County address to the Chamber of Economic Partnership (CEP) morning breakfast on July 8.

The chairman of the Marion County Board of Commissioners has been giving some version of this address consistently over at the last four years, but this year they are ramping it up and county staff planned for the chairman to give the address in the four corners of the county.

County staff even sprung for red, white and blue balloons, reminiscent of the kind you see at election conventions.

Since Zalak is running for reelection this year with four opponents, this seems a very sweet opportunity for facetime with a key constituency, mere weeks before the vote.

According to the county’s press release about the programing, Zalak will share all the county’s recent successes and plans. The county says it will post a video of the address after all of the in-person appearances by Zalak scheduled for July 27, Tuesday, Aug. 9 and Thursday, Aug. 18.

The timing gives us pause. Why not hold this in January, or after the election to avoid the appearance of impropriety?

We’ve reviewed a copy of the speech Zalak gave to the CEP. It sounds like a speech of an incumbent who wants everyone to focus on his 12 twelve years of success.

“A candidate may not, in the furtherance of their candidacy for nomination or election to public office in any election, use the services of any state, county, municipal, or district officer or employee of the state during working hours.”