Community comes through for Cunningham 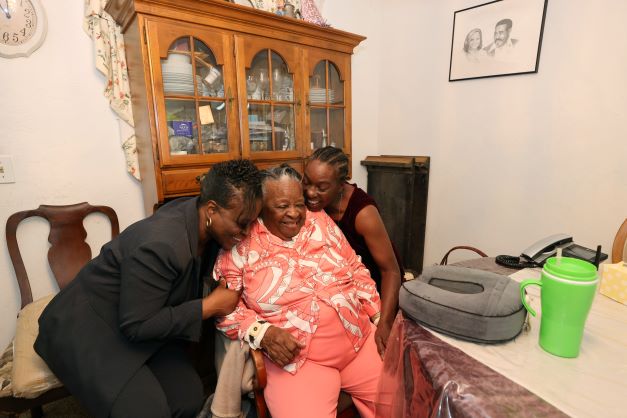 File photo: Allean Cunningham, 96, center, gets hugs from her daughter-in-law, Audrey Cunningham, left, and her daughter, Erica Cunningham, right, at her home, which needs major repairs or rebuilding, on Southeast 31st Street in Ocala, Fla. on Tuesday, May 24, 2022. Allean Cunningham will celebrate her 97th birthday on June 4 and she raised 11 children in the home that was built in 1965. Now the home is falling apart and the family has been trying for years to get help rebuilding the house which has been determined to be unsafe to live in. [Bruce Ackerman/Ocala Gazette] 2022.

Home is where the heart is, the adage goes, and for 97-year-old Allean Cunningham her heart has been sweetly tucked inside a small home on Southeast 31st Street for the past six decades.

The Ocala native’s late husband, Lester, built the modest two-bedroom, one-bath home in 1963, and the couple eked out a living over the years while raising their 11 children. Two more bedrooms and another bathroom were later added.

“We worked hard. We picked peas, tomatoes and peanuts to keep a roof over our head,” said Cunningham, who is legally blind and lost Lester in 1992. “Whatever work kids could do, our kids did it.”

Over the past 30 years, Cunningham did not have the means to keep up with the home’s maintenance, and time has taken its toll. It’s now in such dilapidated condition it was officially deemed beyond repair and unsafe to live in several months ago.

Soon, though, Cunningham will have another home to put her heart into, thanks to a unanimous vote Tuesday by the Marion County Board of County Commissioners approving Cunningham for a new county program under the State Housing Initiatives Partnership (SHIP) program that will allow her to build a new home.

She added: “I thank the county and the community for everything.”

For Cunningham’s family, the formal contract between her and the county comes after a five-year battle to get the beloved matriarch’s home either renovated or replaced due to a crumbling foundation, rotten floors, and cracked interior walls, among other issues.

Her children have tried to get her to leave her home and live with them over the years, but Cunningham has steadfastly refused; there are just too many cherished memories of raising her family on the homestead for her to pack up and move.

“We are elated; we’re incredibly happy and very pleased the board agreed and voted to allow replacement funding for my mother-in-law,” said Audrey Cunningham, wife of Walter Cunningham, the fifth of Allean and Lester’s children.

The couple, who spoke at Tuesday’s meeting, began contacting numerous housing agencies, government officials and nonprofit organizations in 2017 on behalf of Cunningham. Since her home was in such disrepair, which was confirmed via an independent certified inspection, she did not qualify for any funding or grants to fix it.

“I’m just trying to do the right thing before she leaves us,” Walter Cunningham told commissioners during the meeting.

Under the leadership of Director Cheryl Martin, the county agency developed a pilot housing replacement program for homeowners whose home has been determined to be beyond repair and unsafe to live in by a licensed official such as a fire marshal, engineer, or building official.

The program is for those who are income eligible, and their housing needs must be considered an emergency. Cunningham is the second homeowner to qualify for the referral-based replacement housing, said Martin.

“We have a lot of need as a general rule with housing,” she said. Because it has a population of more than 250,000, Marion County is considered an entitlement community and receives a funding allotment through the state for its SHIP program every year, she explained.

To qualify for a replacement, the home deemed beyond repair must be owner-occupied and homesteaded, Martin said.

The county commission vote means Cunningham will receive a SHIP loan up to a maximum of $150,000 to build a new home on the same lot her current home sits on. In addition, her family raised more than $40,000 through a GoFundMe account to help with construction costs.

A SHIP Mortgage and Note will be recorded with the Marion County Clerk of Court in the amount of the assistance. Cunningham will be required to pay $364 each month, representing 30% of her monthly income. Upon ownership transfer, the mortgage will be immediately due to the county.

“I think it’s the right thing to do, and obviously trying to keep it affordable and keep people in their homes,” said Commissioner Carl Zalak III before the vote. “It’s a good thing for us and our community.”

Audrey Cunningham said her mother-in-law’s new home will have 1,350 square feet of living space, along with a porch. It will also feature handicapped-accessible bathrooms to meet her needs.

The family is waiting on the last of three bids from area contractors and once it is received, the information will be forwarded to Community Services, which is assisting the family in choosing the construction company to build the home.

Martin said Cunningham will be allowed to stay in her current home while the new one is being built. When it is finished, her old home will be demolished.

As for Allean Cunningham, she is just happy her new home will be located on land that contains memories of growing children, love and laughter, home-cooked meals and family gatherings.

She is also looking forward to creating new ones.