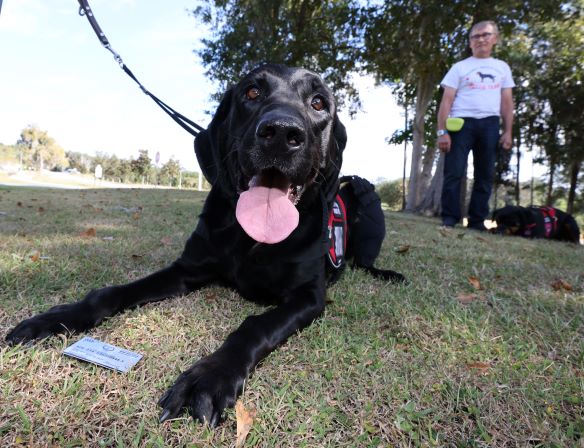 File photo: Trooper, a 5-year-old Black Lab and Standard Poodle mixed-breed being trained by James Davis, lays down by a dropped credit card he has been trained to pick up during a training session for Patriot Service Dogs at Christ The King Anglican Church in Ocala, Fla. on Monday, Oct. 24, 2022. Patriot Service Dogs was founded in 2009 by Julie Sanderson and trains high quality service dogs for veterans free of charge. Patriot Service Dogs uses sponsors, volunteers, and incarcerated trainers working in the WOOF Prison Program at Lowell Correctional Facility to train and place the dogs. Most of the dogs are placed with Florida veterans. In 2022, they became accredited members of Assistance Dogs International, the leading authority on assistance dogs worldwide. Patriot Service Dogs is a finalist for the Defender Service Awards hosted by Land Rover and Chase Bank and they are one of five organizations in the veteran support category. The winner of the Defender Service Awards is determined by public vote and they are asking people to vote for them at landroverusa.com from Oct 21 to Nov 6. Voters can vote once per day per email address. The winner of the Defender Service Awards will receive a custom wrapped Land Rover and $25,000, which Patriot Service Dogs says will go a long way to help provide even more dogs to veterans who need it the most. [Bruce Ackerman/Ocala Gazette] 2022.

It may have been an underdog in a North American competition, but a small, local non-profit organization still beat out some much bigger contestants to garner a big win recently.

Winners were announced at a celebratory weekend event Nov. 12-13 in Saugerties, New York, according to a company press release.

The non-profit beat out four other organizations in the Veterans Outreach category in the contest that recognizes U.S. and Canadian non-profits and charities making a positive impact in their local communities.

“Oh my gosh, we were such underdogs,” said Victoria Sanderson, volunteer coordinator for PSD, which was co-founded by her mother, Julie Sanderson in 2009.” This is really a victory for the community; we had a lot of fervent supporters who pestered their friends and family to vote for us.”

“We even had supporters who went to farmer’s markets and got people to vote for us,” she added. “We are so grateful for the support of everyone.”

PSD was the only Florida based organization out of 800 total entries to contend for a top prize. Other categories in the contest besides Veterans Outreach included Search and Rescue, Environmental and Conservation, Community Service and Animal Welfare.

Winners in each category was determined by public vote Oct. 21-Nov. 6 and 220,000 votes were cast for the 25 finalists at landroverusa.com, according to the release.

PSD places trained service dogs with honorably discharged veterans with mobility, PTSD, Traumatic Brain Injuries, and other issues from any era, regardless of combat wound status, free of charge.

Since its founding, PSD has trained and provided service dogs to at least 53 veterans, mostly through its WOOF (Women Offering Obedience and Friendship) program at Lowell Correctional Institution in unincorporated Marion County.

The majority of dog breeds the organization trains are Labrador or Golden Retrievers, mainly due to their size and temperament. It takes two years for a dog to complete training and get a final health clearance before being paired with a deserving veteran, most of which hail from Florida.

The average cost to train a dog is $20,000 to $25,000, but veterans pay nothing to receive one through PSD, said Sanderson. Sponsors pay $7,000, with donations helping to defray the rest of the cost. Shamrock Animal Hospital in Mount Dora donates veterinary services

Sanderson said her group will utilize the $25,000 check it’ll soon receive as top dog to train volunteers. PSD already garnered $5,000 as a finalist.

“We’re going to work on expanding our volunteer base and our ability to schedule classes and information sessions,” she said.  “Our dogs are sponsored by donations, but we can’t train them without volunteers.”

As for its other winning prize, a custom wrapped and accessorized Land Rover Defender 130 SUV, Sanderson said that’s expected to be delivered sometime in February or March.

“We’ll have a celebration then,” she said.