Come along for a fantastic voyage! 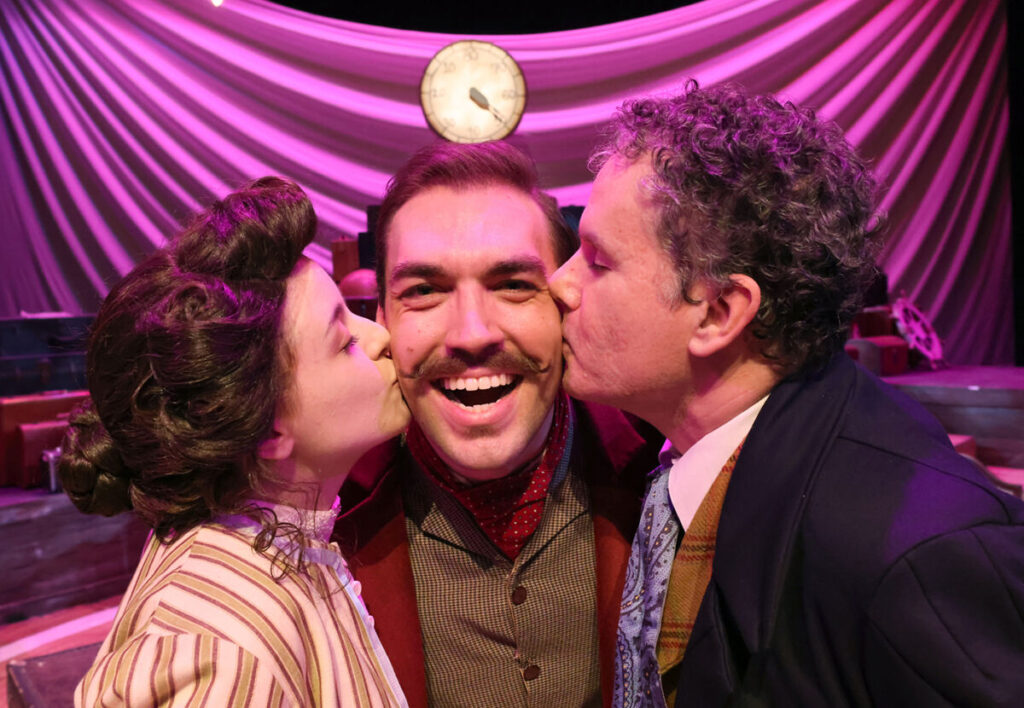 The slapstick and versatility of Around the World in 80 Days are a real trip. 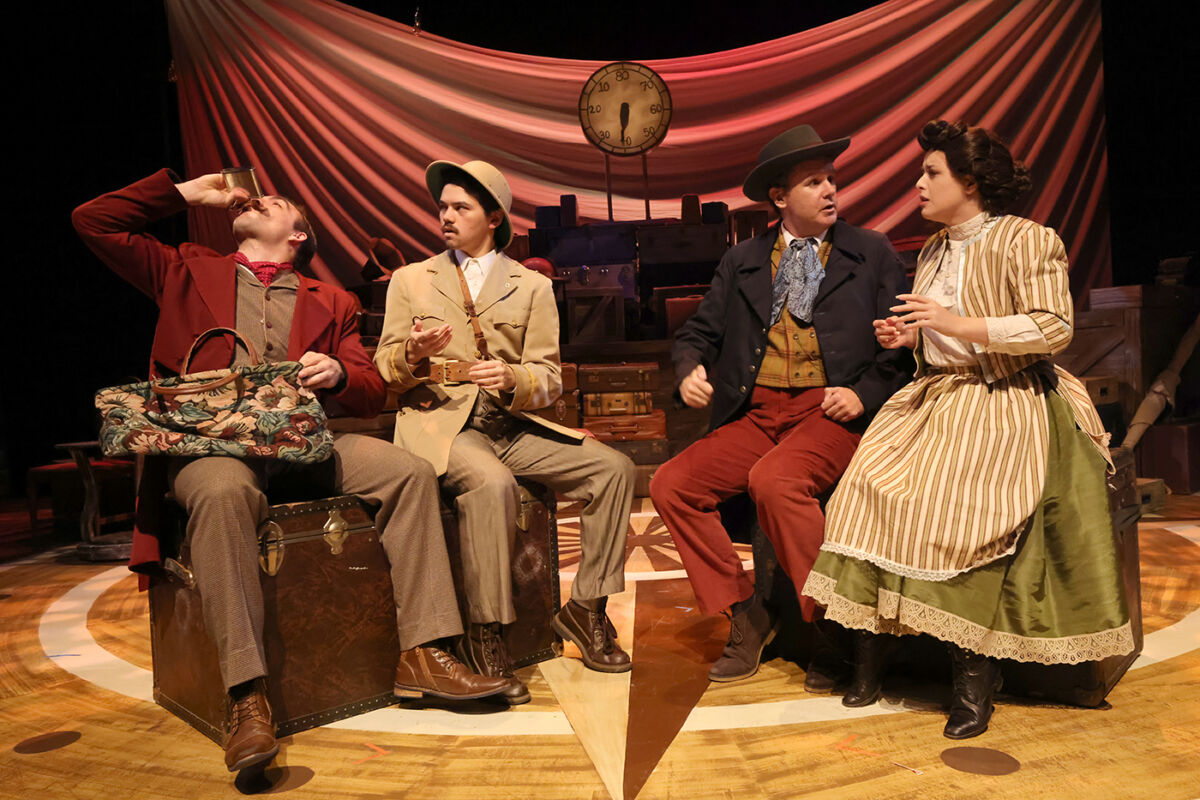 The cast of Around The World In 80 Days, from left, James Ray Taylor III, Christian Gonzales, Trafton Crandall and Lily Capote, rehearse a scene from the play at the Ocala Civic Theatre on East Silver Springs Boulevard in Ocala, Fla. on Monday, Jan. 17, 2022. [Bruce Ackerman/Ocala Gazette]

With all the recent pandemic surges, catastrophic events and muckety muck of politics, we need a good laugh. Fortunately for us, Ocala Civic Theatre has obliged with the uproarious Around the World in 80 Days, opening Friday night.

The play’s jokes land thanks to New York-based director and actor Lawrence Lesher flying in to helm the production. Lesher, a longtime friend and colleague of Artistic Director Katrina Ploof, has an upbeat demeanor and makes you laugh as he laughs with you. Just from talking to him for a few minutes, you get a sense of his sense of humor and comedic expertise as he waxes nostalgic about the Saturday morning cartoons of the 1970s.

“We all agreed that it would be fun to kind of bring that Looney Toons sensibility to it,” Lesher said of the play’s physical comedy. “It’s actually much harder than it looks. It’s so much about timing and precision.”

Lesher’s extensive theatrical experience informs his inner stopwatch. The lifelong thespian performed in the national touring production of The Complete Works of William Shakespeare (Abridged), which like 80 Days features an ensemble cast playing a rotating menagerie of characters.

The director has also established a rapport with playwright Mark Brown, who adapted the classic 1873 novel by Jules Verne, which has been made into films and, most recently, an acclaimed PBS series. Lesher has produced other plays Brown has scripted and understands where his humor is up for interpretation. In Brown’s script, we meet a ruffled and suspendered cast performing the show—a play within a play (like the last OCT production, It’s a Wonderful Life but less emphasized).

Lesher suggested 80 Days a couple of years ago to Ploof. She nabbed it and Lesher, which fits in perfectly with this season’s travel theme.

“I wanted plays about transformation about what going somewhere else can do to us,” Ploof said. “So, in all of our plays this season, our characters change, they all experience something within the stories we’re telling that changes them and alters them in a real, fundamental way.”

If you’re new to the story of Around the World in 80 Days, the action-packed romp follows an exacting British gentleman by the name of Phileas Fogg (Trafton Crandall). When told he couldn’t circumnavigate the world in two and a half months, Fogg dispelled the scoffs and “It can’t be done” dismissals and bets against his priggish peers. “Hold my tea,” he says and makes an outrageous wager to go around the world in 80 days.

Joined by a newly hired French servant Passepartout (James Ray Taylor Ill), Fogg and his equally adventurous manservant are chased by a detective while dashing off to London, Suez, Bombay, Calcutta, Hong Kong, Yokohama, San Francisco and New York. Along the way, they encounter ridiculous delays, derailments, an unexpected elephant ride and other absurd complications.

Actors Lily Capote, Christian Gonzales and Megan Wager round out the ensemble who perform 30-plus roles. What’s more, the play’s many characters aren’t portrayed according to gender, age or nationality, challenging the audience to use its imagination. It’s an easy reach, thanks to the OCT cast.

“We had a number of choices we could have gone with,” Lesher said of the casting. “The role that Megan (Wager) plays, as the detective chasing Fogg is actually scripted for a man, but she just had such a great energy when she came in, and I’ve worked with her before. So I know that she’s a delightful person.”

Indeed, Wager pulls it off with her over-the-top Sherlock Holmes-style cape, hat and pipe. With a raised bent knee and swing of the elbows, she flees scenes in what Lesher describes as the “Scooby-Doo exit.”

There are too many hilarious sight gags to mention. From synchronized leg crosses to the “Law and Order” theme song introducing a courtroom scene, to a makeshift elephant cobbled from found objects, you would need to watch this play two or three times to process all the references and innuendos.

What’s more, stacked steamer trunks and suitcases, hanging old-timey lights with a wave-like scrim lighted cleverly in the background, add old-fashioned charm to the set. All credit goes to Melanie Spratt and Kristen Martino for the clever props and stage designs.