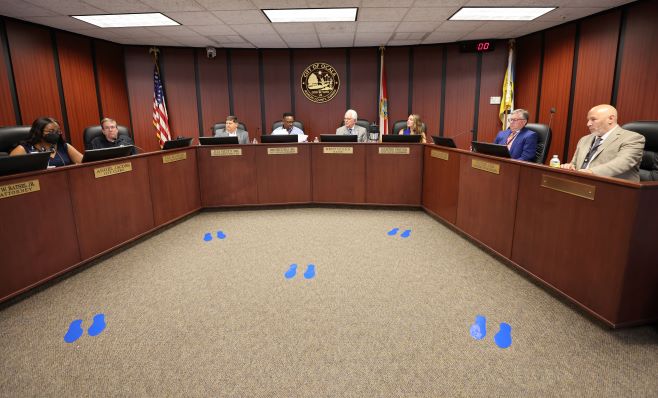 Editor’s Note: The ending date for the current city attorneys was corrected to Oct. 31.

For the first time in more than 30 years, Ocala will have new legal representation after the city council recently voted to hire a lawyer to build a new in-house legal department.

William Sexton, who now serves as the attorney for Bradford County, accepted the council’s offer. His contract will come before the council for approval during their Sept. 20 regularly scheduled meeting.

Council members met Aug. 26 with the headhunter firm of Colin Baenziger & Associates and the three applicants the firm brought in for interviews: Sexton, James E. Saunders, and the Vose Law Firm, which represents multiple government entities throughout Florida.

City council initially offered Saunders the position during the meeting, but concerns about relocating his family emerged and days later, he declined the offer, according to Counciol Member Jay Musleh, who was tasked by the council with negotiating a contract. Council next offered the position to Sexton, whose wife has family roots in Ocala.

As Ocala’s lead attorney, Sexton would be responsible for building the rest of the city’s legal department. Due to concerns about how long it will take to get the in-house department staffed and functioning, the council has sought contracts with firms to fill gaps in the interim.

One of the topics during the Aug. 26 meeting was about whether the city should retain the services of the Vose Law Firm as backup to incoming city attorney while they staff up an in-house legal department.

Council member Kristen Dreyer said the city should continue to use the Gilligan firm “for the sake of institutional knowledge” rather than bring on a new firm.

The Gilligan firm has agreed to stay on under a retainer agreement with the city to support Sexton until he can staff his department. Chris Watt, chief of staff, has indicated that the Gilligan’s firm contract will also be on the Sept. 20 meeting agenda.

Additionally, on Sept. 6 council approved a contract with a Maitland law firm, Shepard, Smith, Kohlmyer & Hand, P.A., to provide backup services to Sexton in the area of land use and transactional matters on “an as-needed basis up to an amount not to exceed $150,000.”

Robert Batsel, of the Gooding& Batsel law firm, indicated during the council’s Aug. 16 meeting that he’d be available to help on a case-by-case basis; however, statutes prevent attorneys who provide routine representation of the city from bringing applications on behalf of developers to that same city. Batsel expected after his and Gooding’s city attorney contracts were up that there would be private clients asking for them to represent them inside the Ocala city limits.

However, City Manager Peter Lee told the council during the Sept. 6 meeting that he’d bring them a list of projects he’d prefer to have Batsel and Gooding handle through their conclusion.

The Gazette made a request to the city’ manager’s chief of staff for that list and was told on Sept. 12, “As of now, there is no list of projects for the Batsel firm to work on. There is no contract being drafted between the parties, and there are no conflict waivers drafted.”

The contract for the current city attorneys–Robert Batsel Jr., Jimmy Gooding and Patrick Gilligan—ends on Oct. 31. Batsel and Gooding had announced last year that they would be splitting off from the firm, now called Gilligan, Anderson & Phelan, P.A., and focusing primarily on representing their developer clients. They would continue, however, to share office space with their former firm and finish their contract with the city.

Their contract paid the law firm approximately $1 million per year. The city expects to spend $1 million annually on the new in-house team, including a salary in the range of $190,000 to $210,000 for Sexton.