Growth is the biggest challenge county staffers and commission face. 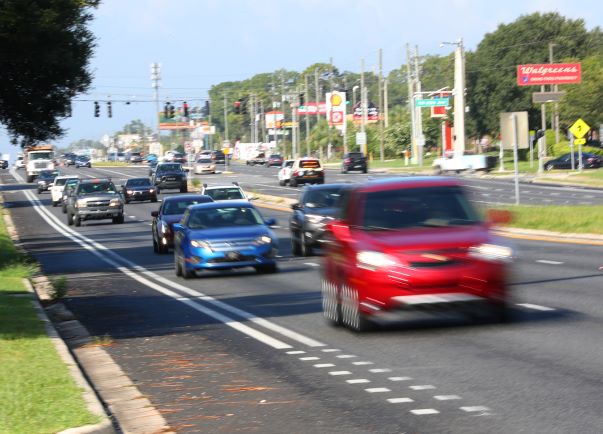 The Marion County Board of County Commissioners on Sept. 7 tackled some of the biggest challenges facing the growing county—traffic congestion and how to process development requests. The board heard details about a proposal to take a broad look at development in a highly congested area of the county, voted to change requirements for traffic studies by developers, and asked staff to develop changes to the county’s planning and zoning process.

At the board’s Aug. 16 meeting, several members engaged in discussions with developer representatives that got heated at times. Among the points of contentions were the amount of traffic a proposed development would add to the area, and what level of review developers must provide for their proposed projects; a full traffic study or a much-less involved traffic assessment.

The board then directed county staff to develop plans for a comprehensive traffic study of the SW 80th Avenue area. Discussion topics would include school capacity, traffic and development, especially in the State Road 200 corridor. 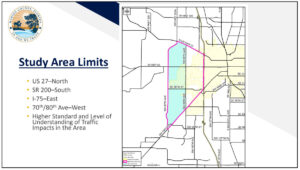 County Engineer Elton Holland on Sept. 7 presented an overview of that study, which would focus on traffic in the area west of Interstate 75, south of U.S. Highway 27, east of the 70th/80th Avenue corridor, and north of State Road 200.

One of the goals of the study is to “…have a higher standard and level of understanding (of congestion, growth and improvements) as it relates to this corridor,” he said. 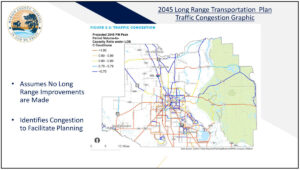 This is especially true in the area south of State Road 40, encompassing the southwest and southeast areas near Stone Creek, Calesa Township, Liberty Village, On Top of the World (OTOW), Oak Run, Marion Oaks, and County Road 484 east to Silver Springs Shores and the Maricamp Road corridor.

The 80th Avenue corridor is of particular concern. The board on Aug. 16 paused a request by Ocala SW 80th Avenue, LLC to build 529 single-family homes on 132.26 acres at SW 80th Avenue and SW 63rd Street Road after representatives of Colen Built Development raised objections to the impacts the new development would have on roads and area schools.

“We have new attractors in that area,” Holland stated. “We have FAST (Florida Aquatics Swimming & Training). We have a new a school getting built,” plus the eventual build-out of the 55+ community OTOW.  FAST and the new school, the Ira A. Colen Academy, both are within Calesa Township, which is adjacent to the proposed 80th Avenue project.

The study would also include the in-progress NW 44th Avenue corridor, slated to (eventually) reach US 27 to the north. It would also factor in the new 63rd Street Road going  through Calesa Township and ending at SW 38th Street. The study’s analysis would account for projected impacts from changing zoning of parcels from agricultural or low-density to medium-density and to high-density (typically apartments and townhouses.)

Holland showed a slide representing population growth, projected at 111,000 new residents through 2045. The bulk of the growth and traffic is expected in the south end of Marion County with a few growth pockets showing near Anthony, McIntosh and Reddick. The new study would also include socioeconomic factors, traffic producers, traffic counts, new roads and attractors not yet in the current system, and would account for local and pass-through trips. 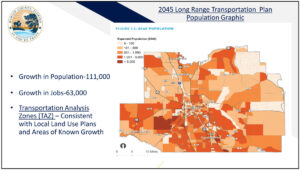 County Administrator Mounir Bouyounes countered, “This is not going to help you make decisions tomorrow or for the next zoning meeting. But that’s the time frame it’s going to take to develop that comprehensive study for that area.”

Commissioner Craig Curry had concerns as well. “Historically, traffic studies were done upfront and presented to the commission.” Curry noted that during the 2008-2009 recession, when development was at a minimum, and due to the costs of full traffic studies, about $40,000, the board dispensed with those requirements for developers.

“The problem that we have is trying to make good decisions with a lack of information,’’ he said. “We have this all over the county, but the same problem is in 484 and Silver Springs Shores. The county is bubbling in a lot of different areas. It still leaves all of these other corridors with the same problem.”

Some commissioners conceded the struggle they’re facing with traffic, schools and growth in general.

“I’m sure there’s not anyone sitting up here on this dais that hasn’t lost sleep over this very issue,’’ said Commissioner Kathy Bryant said. “The biggest challenge we face as a community is accommodating the growth that is coming our way.”

Bryant expressed a desire to “take the time to get it right. Isn’t it worth it?”

Commissioner Michelle Stone suggested, “Going forward, I think we need the developers to bring us that traffic study upfront. Across the entire county.”

Bouyounes said he and county staff will produce a contract and schedule to present to the board for the new study.

The board further discussed that for large-scale projects, for a land use or zoning change, a full traffic study is usually required based on the size of development. The cost is the same for the project; the requirement simply moves up the expense to earlier in the .

The board decided to apply the new traffic study requirement will apply to new applications only, as dictated by project size, going forward.

The discussion then segued into the Planning and Zoning agenda item. Again, predicated on the Aug. 16 meeting and the overall development in the county, commissioners expressed concerns about dealing with growth.

Bryant said it was difficult to have only one time (the public hearing) to talk with an applicant. She thought it would better serve the community if commissioners could meet with applicants to address concerns before a formal hearing and vote.

“What is the harm in taking this from a two- to three-month process to a three- to four-month process, if it gives us more complete information? You’re talking about approving projects that are changing the face of our community forever. It’s a big deal.”

The current planning and zoning process takes about 10 weeks, assuming no snags, said county staff. Zalak noted it was a workload issue for staff; there are only so many applications they can process in any one week. The commissioners also expressed a desire for more complete plans to come before them and to stop repeated continuances (of cases) due to incomplete information.

Zalak said continuances aren’t fair to the public if they have to repeatedly come to meetings; it’s also not fair to staff who have to rework the cases and to commissioners who must review them repeatedly.

Zalak said the county could manage four to five large-scale cases in a month and hinted at possible changes to come, even holding off on permitting for certain areas of the county.

Bouyounes said he would bring recommendations for a revised process and new suggested timelines for board approval.