The following is a statement of policy from Ocala Police Chief Greg Graham, written to several citizens who met with him to see how the Ocala Police Department operates. 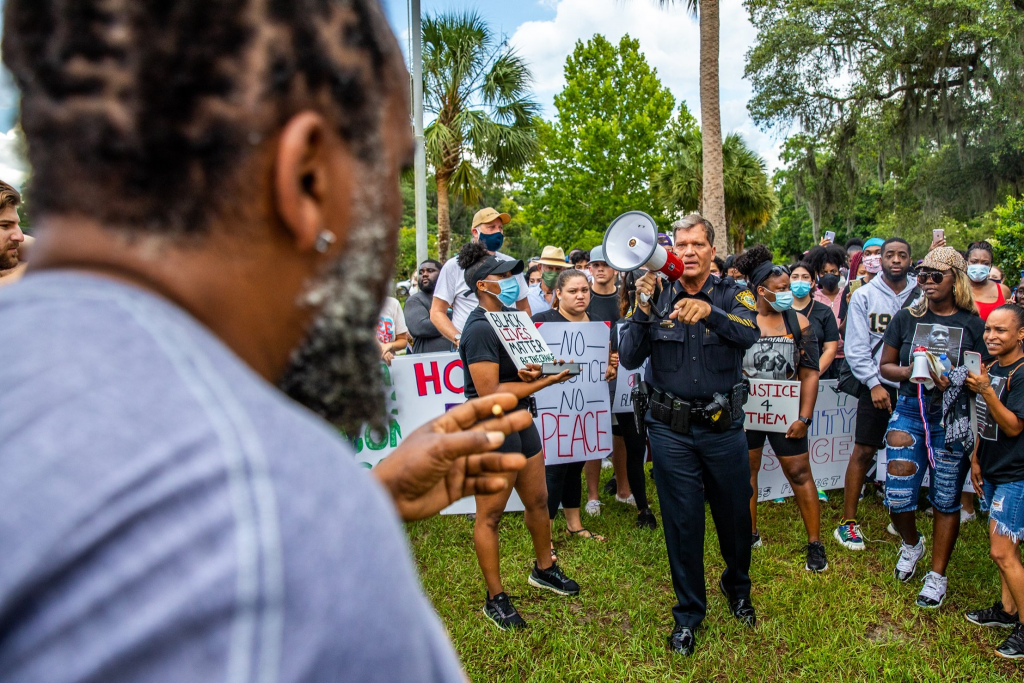 The Ocala Police Department has a long history of professionalism and fairness in the relationships and approach of policing of our community. We have taken steps over the years to foster relationships and take steps to minimize the likelihood and to prevent tragedies of any sort to occur in our great city.

Many years ago, the Ocala Police Department recognized the importance of forming bonds and encouraging open dialogue with the citizens that we serve. We are partners with the citizens and work together as a community.

We do not take an “us vs. them” approach of policing in the City of Ocala. We have taken steps to ensure that every citizen is treated with respect and the policies support those encounters we have with our citizens both formally through the Accreditation Process and informally by creating an environment focused on Servant Leadership from our supervisors in the Ocala Police Department.

The Ocala Police Department is Accredited through The Commission for Florida Law Enforcement Accreditation. During this process we are evaluated annually on our practices and procedures and undergo a commission review every three years. We have maintained “Accredited” status for 15 years now.

Our agency forbids the use of chokeholds and neck restraints and has for the last 20 years. The head, neck and groin area are restricted areas in our use of force continuum.

Beginning in 2006, OPD was the first agency in Marion County to have body-worn cameras assigned to officers. This practice was expanded to the entire patrol division in 2012 when I became chief of police.

We have an extensive review of our citizen interactions and the results are 93 percent of our Internal Affairs investigations result from internal reviews, and not citizen complaints.

Our policy dictates that if an officer sees a violation, they must report the incident to a supervisor. All officers are required to receive citizen complaints as well and assist the citizen with the procedure for filing a formal complaint. There are several examples where internal complaints have resulted in both termination and re-assignment when warranted. The employees of the Ocala Police Department are held accountable for their decisions.

The complainant of an Internal Affairs investigation is notified of the outcome, including disciplinary action upon final disposition of the investigation. Those results are also reported to the Criminal Justice and Standards Commission to review the actions of the agency and determine if additional sanctions may be needed against the Police Certificate that all of the Ocala Police Officers maintain, including the increase of departmental sanctions if they feel “significant action” was not initially taken by the agency.

The Ocala Police Department recruits heavily within the minority community of Ocala. I have developed a program where individuals can be hired and sponsored through the police academy to obtain their police certificate. This program has been highly successful and since 2012, I have hired a total of 242 full-time employees. The overall make up of our agency is representative with the racial makeup of our community and there is minority representation in all levels and ranks within the Ocala Police Department.

Below is the breakdown of those hired:

Below are the statistics for the previous 5 years for the Ocala Police Department.

Report of Force while making arrest*:

(*We conduct a Supervisory Review of Force on any instance that happens during a citizen contact beyond a “guiding touch.” The Use of Force in a citizen encounter is a response to the actions of the citizen complying or failing to comply with the verbal direction and/or guiding touch of the officer. The citizen determines if the use of any physical force is needed when an officer is enforcing the law through their action(s).)

Any force that is used beyond the guiding touch of an officer is documented and evaluated through the chain of command to the bureau commander of the officer to ensure that policy has been adhered to.

There is an early warning system in place that identifies officers who uses force for citizen compliance more frequently and those cases result in a second review from the bureau captain and Internal Affairs Office. This review is used to identify patterns or training issues that may need to be addressed to ensure that the officers are doing the right thing during all calls for service.

The Office of Professional Standards houses the Internal Affairs investigators of OPD where all internal and external complaints are reviewed, with the exception of any death investigation involving an Ocala police officer or an in-custody death.

Any instance where an Ocala police officer is involved in the death of a suspect or in-custody death, the Florida Department of Law Enforcement conducts an independent investigation of the incident.

Having a strong relationship with all members of the community is important to the Ocala Police Department. I meet with several different groups, especially from the minority community, to develop partnerships and strategies to address quality of life issues as well as to combat crime.

Community engagement is paramount for any police department to be successful in the mission of Community Policing.

When I first heard of the planned First Amendment protests in response to the unspeakable events that occurred in Minnesota, I reached out to the minority community leaders and partnered with them to ensure the safety of all of the protesters who were exercising their rights as an American Citizen.

As a result of this relationship, the protest happened peacefully, and the event can be used an example to other communities throughout the country.

In fact, I have received five applicants for police officer from minority citizens who participated in the march. Two of the applicants were organizers of the march. This shows how strong the bonds are here in the City of Ocala.

If you notice communities that have civil unrest throughout the country, a common factor is a breakdown between the police department and the community. It is important to remain connected with the community and maintain both communication as well as transparency with the citizens.

Many people are unaware, but Ocala had a stand your ground incident similar to the shooting that occurred less than 80 miles away in Sanford, Florida, involving Trayvon Martin. The case involved a white citizen who shot a black citizen, and I personally called the minority leaders of the community to keep them informed of the investigation and asked for their help to assist with witnesses and communication in the case. Open communication and transparency provided an avenue for citizens to stay informed during the incident resulting in no civil unrest.

Similarly, we have had in-custody deaths that, through a combination of the relationships we have formed, along with the body camera technology that we use, I have the ability to be transparent during my communication with the community.

I am proactive in addressing issues that face our great city. Relationships with the community have provided those avenues that are needed for a successful relationship. This backbone is formed over a long period of time and is not taken for granted.

The Ocala Police Department operates under five basic and fundamental rules that both I and my staff preach daily to all the employees:

2. Ask forgiveness instead of permission.

a) Our officers are instructed not to wait for someone to tell them to do the right thing.

4. Treat everyone with respect. a) Everyone matters. b) Everyone’s opinion counts. c) No one is better than anyone else.

These rules were not developed by me. I learned these rules in kindergarten from Mrs. Winters. Every employee sits through a one-hour speech from me prior to being hired where I explain these rules in detail to them. I believe in clear expectations and these are clearly communicated to everyone. My rules have become a motto for the Ocala Police Department.

As a community member and the chief of police for Ocala, I am always willing to sit down with any group and discuss any topic that can help make Ocala all that it can be. My roots and my family are here in Ocala and I want all to be able to strive to be better neighbors and friends here in Ocala.

Greg Graham is the chief of police for Ocala.