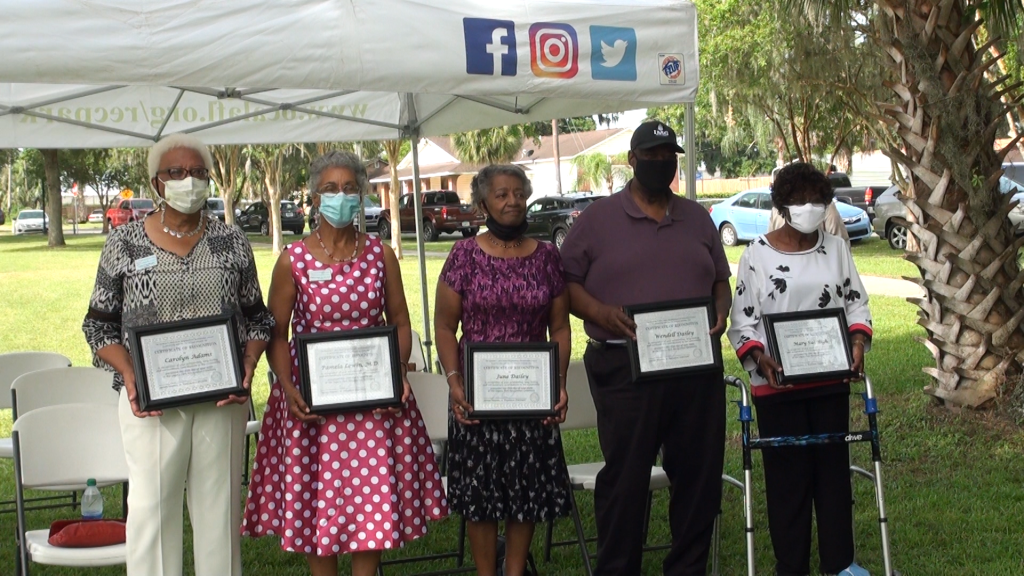 As a bright morning sun filtered through the ages-old and towering oak trees around Legacy Park in West Ocala, people began to gather in preparation for a ceremony showcasing the devotion of several citizens.

Legacy Park, in the 900 block of Southwest Ninth Avenue, provides walking trails and greenspace within the city, while reminding residents about leaders who have shaped the community. The honorees at each year’s event are celebrated with engraved pavers bearing their name and a special comment, which are interspersed throughout a winding brick pathway around the spacious park. 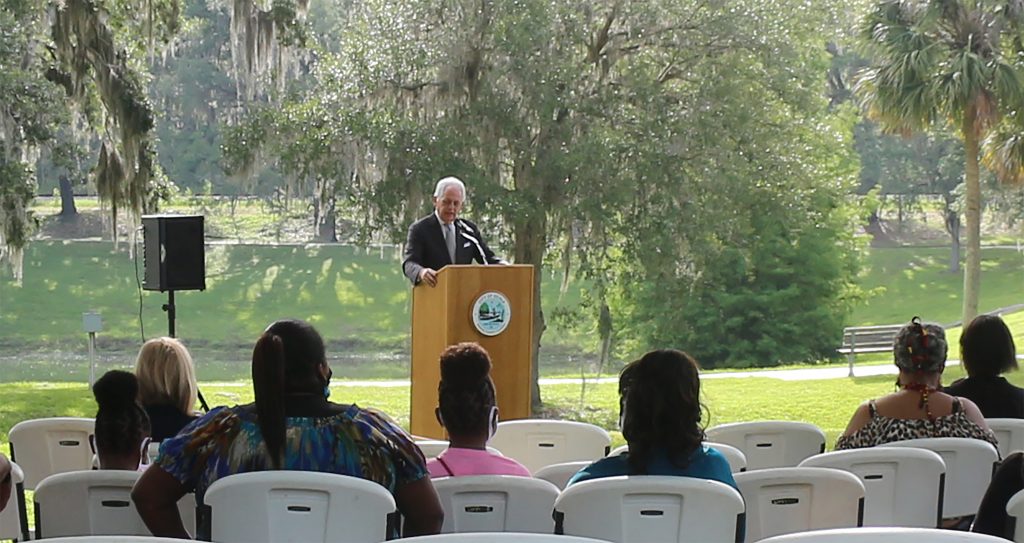 Wilson-Graham welcomed attendees with a quote by Maya Angelou and then invited Ocala Mayor Kent Guinn and newly elected City Councilman Bethea to deliver remarks about each honoree.

M.A. Clouts – During Post-Civil War reconstruction the Freedmen’s Bureau opened in Marion County in 1867 to promote education, register Black voters, encourage former slaves to apply for land under the Homestead Act of 1866 and appoint Blacks to public office. Clouts was appointed Marion County Sheriff by the local bureau chairman in 1868. He was the county’s seventh sheriff and first Black sheriff. He was one of the first freed slaves to be appointed to public office. He held the office until 1870.

Burrell E. Dawkins – Dawkins, appointed to office in 1871, was the county’s first marshal. He was shot and killed in the line of duty in March 1881, after a violent run-in with an out-of-towner. His badge, dented by a bullet, remains on display in the lobby of the Ocala Police Department.

Dr. Pamela Lewin – Lewin is currently the medical director of the Estella Byrd Whitman Wellness and Community Resource Clinic, has practiced medicine in Marion County for more than 40 years, including with the Marion County Health Department, Heart of Florida Health Center and in private practice.

Carolyn Adams – Adams graduated from Howard High School and the University of Florida. She is a member of Chi Eta Phi Sorority and Sigma Theta Tau, the honors society of nursing. Her grandmother asked that she return here upon retirement and open a health clinic on her land, which is now the Estella Byrd Whitman Wellness and Community Resource Clinic.

June Dailey – She retired from Forest High School after 34 years of teaching accounting, business law and business management. At Progressive Union Missionary Baptist Church, she is superintendent of the Sunday School, chair of the church council and more. She is a member of the Ocala Alumni Chapter of Delta Sigma Theta Sorority and has been involved in numerous community organizations.

Wendell Dailey – He graduated from Fessenden High School and Benedict College, and was a stellar athlete at both schools. He was inducted into the Benedict College Hall of Fame. His coaching career spanned 45 years, touching the lives of athletes in track, basketball and football at Fessenden, North Marion and Forest High schools. He also has been involved with many local organizations.

George Giles. Giles was owner of the Ocala Knitting Factory in downtown Ocala from 1912-17. He was president and stockholder of the Metropolitan Savings Bank, owned Giles Metropolitan Realty and Investment Co. and co-owned Metropolitan Knitting Mills. Giles died 1919.

Mary Sue Rich – Rich, a native of West Ocala, graduated from Howard High School and the University of Central Florida. She began a career with the Florida Department of Corrections in 1972. She retired as a senior supervisor after 31 years. She represented District 2 on the Ocala City Council for 24 years and spearheaded the Racial Harmony and Cultural Awareness Task Force. Rich has received numerous awards and honors and a community center that is being constructed will be named in her honor.

Rich remarked that she was “greatly honored” to be included among the group,

“I am in awe,” said Lewin. “Certainly, I appreciate that our work is being recognized.”

Bryant told those gathered that the council was incorporated in November 2002 and has been involved in matters such as disbursement of Community Development Block Grant dollars, zoning and land use issues, transit system routes, housing and environmental issues, infrastructure improvements, crime, economic development, fire protection and code enforcement. The current mission is to encourage cooperation between local, state and federal agencies for community revitalization, local partnerships, job creation and retention, affordable housing and quality of life. The council meets remotely at 9am the second Tuesday of each month. To learn more, find the GWONRC on Facebook.