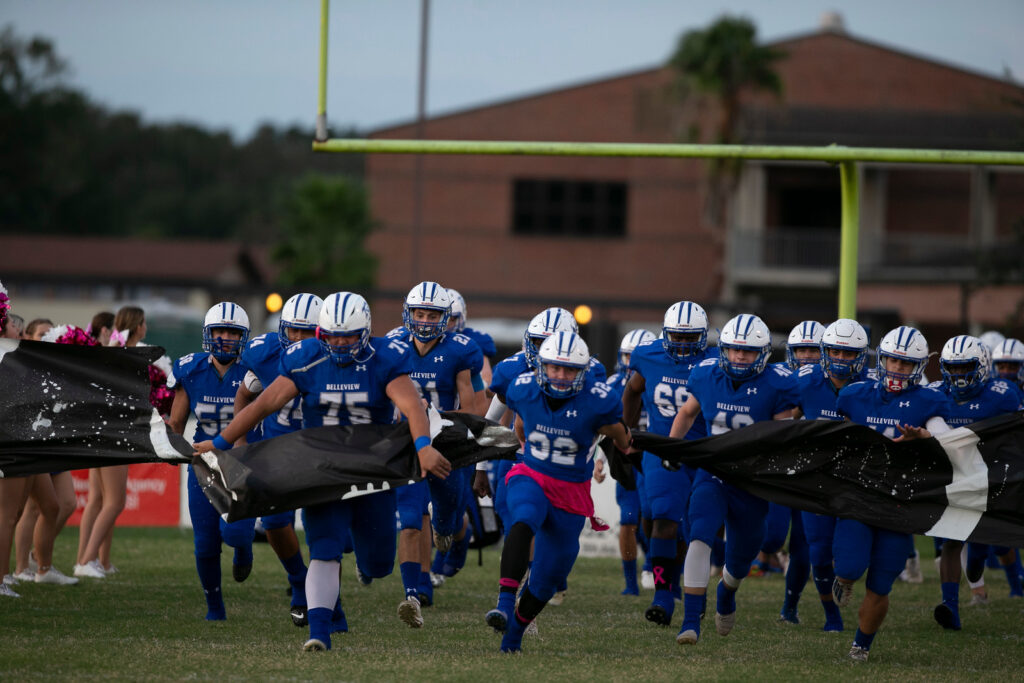 The Belleview Rattlers run out on the field before they take on the Lake Weir Hurricanes at Belleview High School in Belleview, Florida on Friday October 9, 2020. Lake Weir beat Belleview 18-6 [Alan Youngblood/Special to the Ocala Gazette]

Ackerman will be replacing Adam Martin after a three-year stint that saw the Rattlers go 1-24. Martin was relieved of his duties back on Nov. 16.

Ackerman, the 51-year-old Jacksonville native, moved to Ocala in 2000, where he raised his children. After spending 17 years in Ocala, four of which he spent volunteering with the Forest football team, Ackerman took an assistant coach job at Jackson State University in Jackson, Mississippi.

Despite the nine-hour commute, Ackerman revisited the Ocala area often to visit his three kids.

When Jackson State struck gold in its hiring of two-time Super Bowl champion Deion Sanders in September, Ackerman was not kept aboard the coaching staff.

However, with an understanding of the Ocala and Marion County area, Ackerman was quick to recognize how special of an opportunity the Belleview job presented.

“I couldn’t think of a better job,” Ackerman said. “Belleview is a unique place. The way it retains its fan base and alumni base is just unique.”

Ackerman will be the Rattlers’ eighth head coach in the program’s history and the fifth in 11 years.

“Coach (Brent) Hall started it and did great things,” Ackerman said. “The goal is to bring Belleview back as it should be as one of the top programs in 5A.”

Hall, who is the namesake of Belleview’s football field, was the first coach in the program’s history and served from 1994-2000 where he led the Rattlers to the state semifinal in his final year.

“We had over 100 applicants for this job, it took us a month, a million phone calls and a lot of hard work, Belleview athletic director Philip Small said. “We had nine guys in for final interviews and Brady absolutely separated himself during the interview.

“Of all the people that I have spoken to, the two things that continually come up about Brady are his incredible football acumen, and how phenomenal he is with kids.”

Ackerman played at the University of Florida from 1988-1992 as a running back and earned a SEC Championship ring in 1991. Aside from his coaching career, Ackerman has made himself a career in broadcasting, as he served as the Florida Gators football sideline reporter, and hosted a number of sports talk shows, including a show with Ocala’s 900 AM WMOP radio station.

From 2002 to 2012, Ackerman also hosted the Brady Ackerman Scramble, a charity golf event benefiting the Boys and Girls Club of Marion County.

“We need some jumper cables on our program, and Brady is the perfect fit,” Small said.