An eye on nature 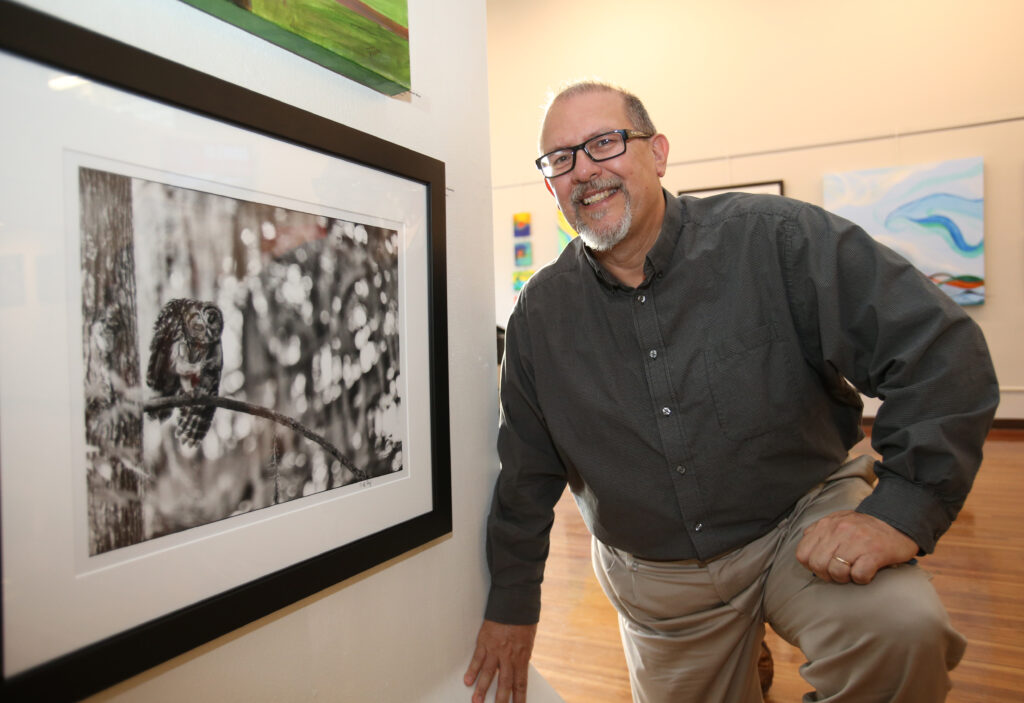 Saul Reyes poses for a photo with his print of a barred owl preening during at the Brick City Center For The Arts in Ocala on Jan. 8. [Bruce Ackerman/Ocala Gazette]

Saul Reyes poses for a photo with his print of a barred owl preening during at the Brick City Center For The Arts in Ocala on Jan. 8. [Bruce Ackerman/Ocala Gazette]

The wispy plumage of an egret. The bony scutes down an alligator’s back. Water droplets flying off a bobcat’s fur as she trots down the trail.

These are just some of the exquisite details Ocala wildlife photographer Saul Reyes has captured with his camera. Often his images are taken in local parks — and sometimes right in his backyard.

“I love the outdoors, but I also love the idea of going slow and observing and listening,” Reyes said. “Usually, when I’m doing photography, I’m by myself. I’m not in a hurry. I’m experiencing; I’m going slow. I’m looking in front, behind, above. It’s just going out and enjoying being in nature.”

“It’s fun to be able to say, ‘I’ve taken all these pictures, or this set of pictures, all within 15 minutes of here,’” Reyes said.

He exhibited his first photograph in MCA’s first juried exhibition, “Pleasures,” in September 2019. The black-and-white image of an owl won the Gallery Director’s award and ribbons for community favorite and board member favorite.

“I would say 90% of what I take pictures of tends to be birds, and that’s what I’m drawn to,” he said. “But it’s Florida, and that’s what you tend to focus on in Florida. I guess my eye catches that more than other things.”

His patient, observant method has allowed Reyes to capture images of a wide variety of birds — from great blue herons, snowy egrets and double-crested cormorants in flight to ospreys and eagles catching fish and a screech owl nested in a tree trunk. 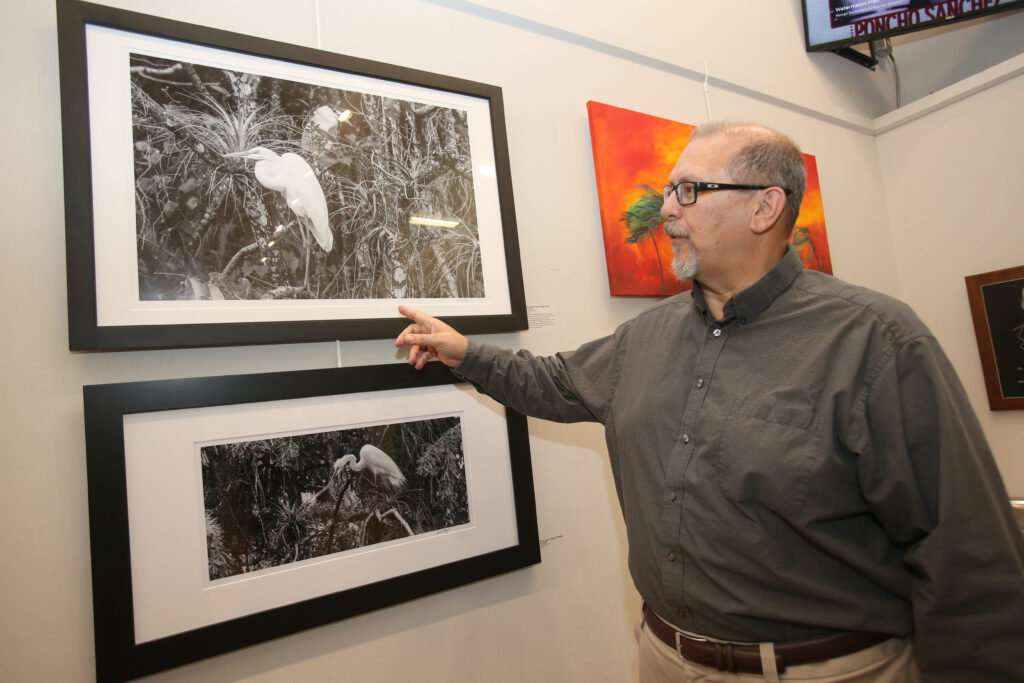 Reyes describes some of the nature photographs he has on display at the Brick City Center For The Arts in Ocala. [Bruce Ackerman/Ocala Gazette]

“Anytime I’ve seen a bobcat, it’s been a thrill,” he said. “I’ve probably seen bobcats in the wild six or seven times, got pictures three times. It’s just a rush. Most of the time, when I see them, it’s really quick. You see them for five or six seconds, and they’re gone. I’ve been fortunate on a couple occasions to get some great shots of bobcats.”

One rare image is the result of an early-morning walk with his wife.

“She and I came upon a bobcat and three kittens,” he said. “We just stayed still, and the bobcats were around us for about 10 to 15 minutes. And it was amazing because Sharon was with me, and she got to enjoy it too.”

Reyes, the College of Central Florida’s vice president of enrollment management and student affairs, has only been serious about photography for the past six or seven years. He wants those who see his work to understand that, with a little patience, they can experience similar encounters with nature.

“It’s just a matter of being more observant,” he said. “You can do great birding, for example, at Tuscawilla Park. There’s all sorts of birds right there. I have a pileated woodpecker photo that I took at Jervey Gantt Park. It’s the unexpected joy of ‘you can see this right here and not have to travel to see it.’ You don’t have to go far to see it and enjoy it.”