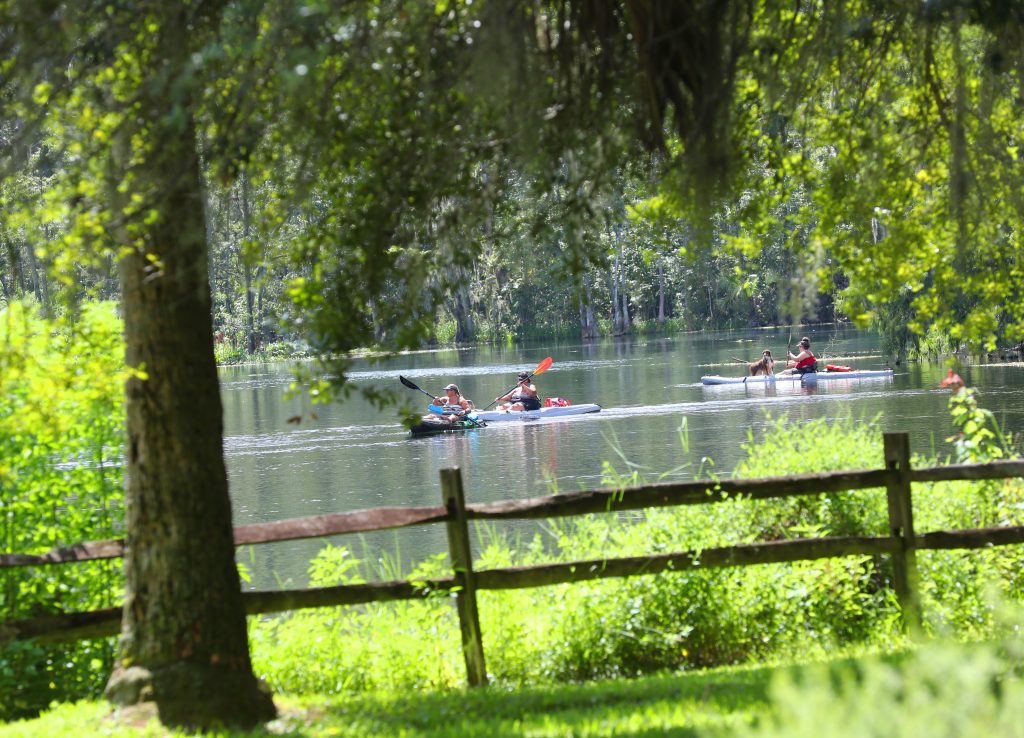 In this file photo, kayakers paddle just off shore where the state has proposed a beach and swimming area near the Glass Bottom Boat dock at Silver Springs State Park in Silver Springs, Fla. on Monday, July 27, 2020. [Bruce Ackerman/Ocala Gazette] 2020.

In a letter dated May 20, 2022, and addressed to Shawn Hamilton, secretary for the Florida Department of Environmental Protection (FDEP) in Tallahassee, County Chair Carl Zalak III expressed his and the Marion County Board of County Commissioner’s support for once again allowing swimming at Silver Springs State Park after more than 50 years.

Zalak pointed out in the letter that tourists and Marion County residents alike were able to swim in the “cool, crystal-clear waters” of Silver Springs until swimming was disallowed in the late 1960s.

The Florida Park Service took control of Silver Springs and assumed management of the property, according to Zalak, merging it with the adjacent Silver River State Park, forming Silver Springs State Park in 2013.

A year later, the state’s Unit Management Plan (UMP) for the park included the creation of a public swimming area at the headsprings and the construction of a mooring/convenience dock downriver.

In 1978, the letter continued, Wild Waters Water Park was built adjacent to Silver Springs. It was closed in 2016 and the infrastructure of the park was removed in 2019.

“Since the state gained ownership of the park almost a decade ago, a host of improvements have been discussed and planned,” wrote Zalak, “however, few have come to fruition as the projects, including reopening swimming at the springs, have been mired in bureaucratic processes.”

Marion County requested that the FDEP receive $1.5 million in appropriations, said Zalak, in an effort to help kick start more of the projects and construction included in the UMP. Since July 2019, when funding was made available, the project has remained in a planning/design phase.

Zalak’s stated intention in the letter is that adding activities within the park will entice more visitors to “come enjoy the scenic, natural beauty that is Silver Springs State Park.”

“The Marion County Board of County Commissioners, its citizens and its legislative delegation, strongly believe opening the headsprings to swimming, increasing opportunities for access to the park, specifically from Silver River, and increasing the opportunities for public/private partnerships with the park will be key components in the revitalization of the Silver Springs community,” concluded Zalak in the letter.