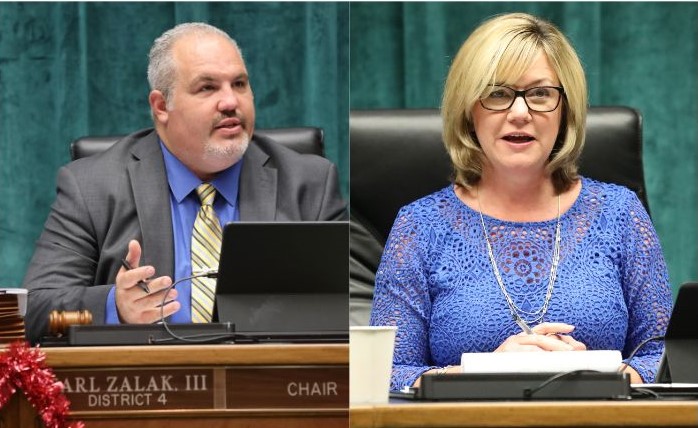 Republican incumbents Carl Zalak III and Kathy Bryant easily prevailed against two write-in candidates on Tuesday to win their fourth terms on the Marion County Board of County Commissioners in districts 4 and district 2 respectively.

According to unofficial totals posted to the Marion County Supervisor of Elections website Tuesday evening, Zalak, received 115,779 votes, or 90.10 % of the total. He faced write-in candidate Brian Donnelly.

Bryant, meanwhile, received 120,683 votes, or 93.06% of the total. Her challenger was write-in candidate Gina Capone.

Wilcox explained to the Gazette that when the digital scanners detect ballots where voters filled in the oval for the write-in choice, a snapshot of what name as written in the blank spot and those digital images are manually sorted over the days that follow the election. Only votes for qualified write-in candidates are counted.

Capone offered her congratulations to Bryant and Zalak following their win and offered this advice to them, “I hope in the next four years that we can see the love you have for the county and community grow. That through your efforts you will make the right decisions based on the preservation of our land, wildlife and aquifer. The residents that you serve are important and deserve the best from you. My hope is that you encourage the residents to be part of the conversation and invite them to have a seat at the table.”

Bryant and Zalak were both first elected to the board in 2010. Commissioners serve four-year terms and there are no term limits. Commissioners are paid $89,764 plus benefits.

Bryant, who faced no opponent in the primary, raised $152,140 during this local election cycle, and expended $23,306.57, according to the last campaign records filed.

In a statement to the Gazette following her win, Bryant wrote, “My passion for serving Marion County and its citizens is just as strong today as it was the first day I accepted the role of county commissioner in 2010. It is amazing to see how far Marion County has come in the last 12 years, and to know that I’ve been trusted with another term in office is humbling beyond words. I look forward to working together to continue to make Marion County a great place to live, work and play for future generations.”