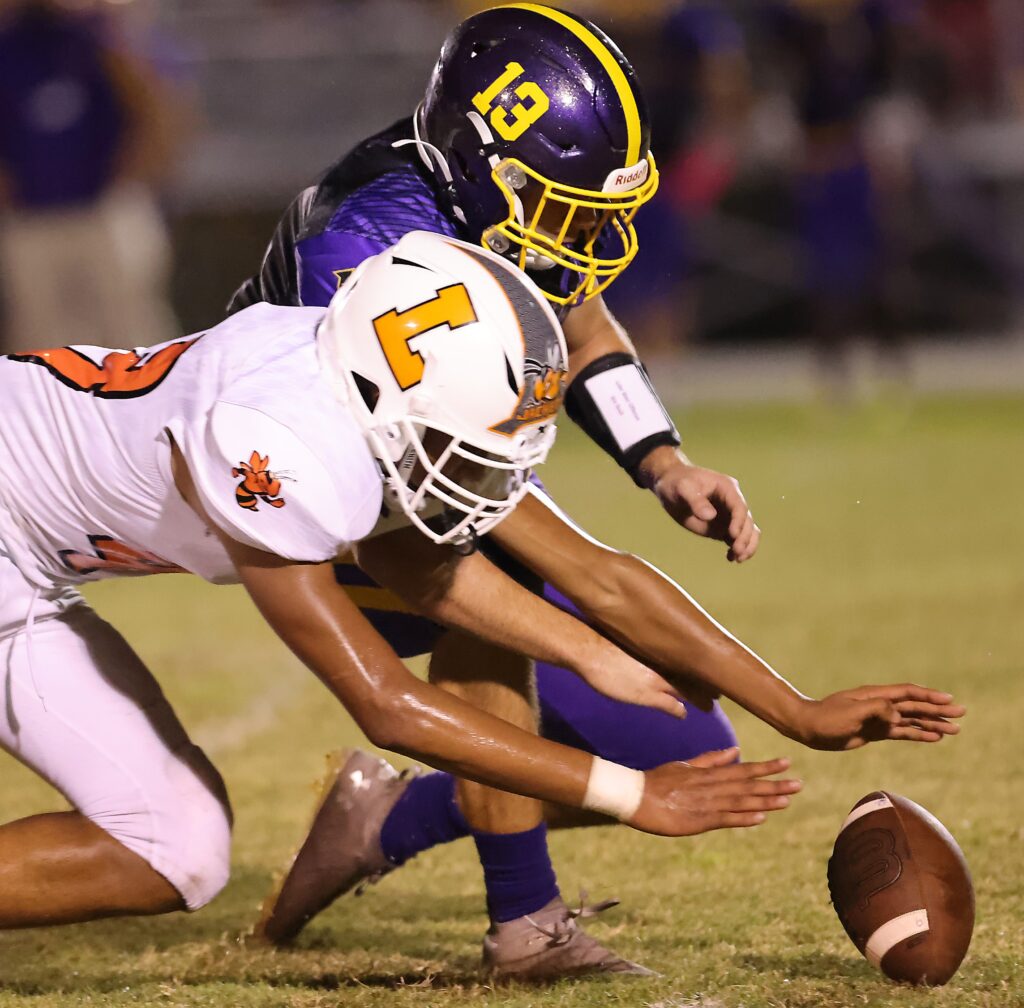 Angry skies and a 30-minute lightning delay on Friday night foreshadowed the resounding defeat of the Lake Weir Hurricanes at the hands of the Leesburg Yellow Jackets.

The weather-delayed 5A District 5 matchup wasn’t pretty. The final score was 60-0.

Leesburg (3-0 overall record, 1-0 in district play) only needed two quarters to amass 52 points—14 in the first quarter, 38 in the second—against Lake Weir (1-2, 0-1) to force the second half to a running clock—a form of mercy rule.

Over the course of exactly 24 minutes, the Yellow Jackets would add one more touchdown and two-point conversion in the second half to win the game with a final score of 60-0.

Lake Weir head coach Eoghan Cullen said he was pleased to see his boys fight to the bitter end, despite the beating they took on the field.

“We didn’t quit,” he said. “We just made too many mistakes and the odds were insurmountable.”

The Yellow Jackets would score on their second possession at 6:31 in the first quarter. Senior Brady Curtis would find sophomore Khanye Gaines for the 18-yard touchdown pass.

Missing the two-point conversion, Leesburg had the early 6-0 lead.

On their next possession, the Jackets would score again with 1:06 left in the first quarter. This time, the two-point conversion was good, giving Leesburg the 14-0 lead going into the second quarter.

At 8:32 of the second, Leesburg’s Clifton Johnson would score on a 91-yard touchdown run off a sweeper play deep in his own territory. After another successful two-point conversion by Nykese Williams, the Yellow Jackets were up 20-0.

Leesburg would recover a kick return fumble by Lake Weir and score on the ensuing possession. Williams again scored the touchdown and two-point conversion for the 28-0 lead with 7:07 remaining in the first half.

Back-to-back Yellow Jacket possessions would produce points—after one punt and one turnover on downs by the Hurricanes.

Quarterback Camerin Jones scored a touchdown on a keeper play at 5:03 in the second quarter, while Williams added his final touchdown of the game with 2:34 remaining in the half.

And between those two scoring possessions, defensive back Kenneth Gilliard would recover a Lake Weir fumble for a defensive touchdown at 4:58 in the second quarter.

The third quarter produced no points. But the Yellow Jackets were able to add one more touchdown and two-point conversion to the scoreboard on their first play of the fourth quarter.

For the Hurricanes, junior quarterback Manny Geisel (2-for-14 in the air) and fullback Jackson Quick (over 15 carries) had commendable games, but never got too close to the end zone for much of the contest.

“It gives them a good chance to see football on a different level and learn from it. Leesburg played a great game tonight. All credit to them. We just got to focus on making less mistakes and turn the page for Belleview next week,” Cullen said.

Lake Weir will host the Belleview Rattlers at 7 p.m. on Sept. 24 in a non-district game.