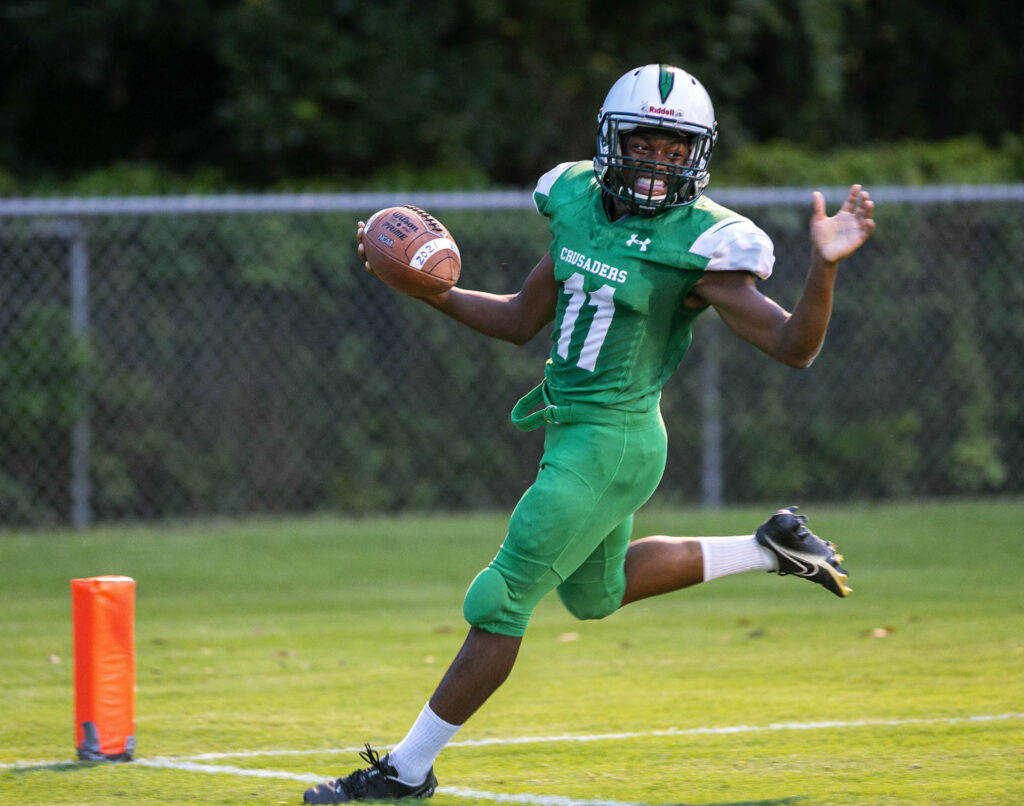 The Ocala Christian Crusaders shined on Senior Night, defeating the visiting Foundation Christian Academy Panthers (0-2), winning 70-0, to improve to 5-0 overall and 2-0 in their district.

The Crusaders attacked quickly and often, up 32-0 by the end of the first quarter. But they didn’t taper off from there, as senior running back Keiron Williams took the first snap of the second quarter, broke left and galloped to the endzone for the long score. After the two-point conversion, the Crusaders were up 42-0.

Keeping guys motivated once the game was in hand was one of the biggest jobs for head coach Jim Pierce.

“You want the boys to play as best they can. We tried to sub-in as much as we could,” Pierce said. “It’s really difficult. We just try to be ready for it and keep their spirit right. And we’ve got a good group of kids and they’ve embraced what we’re trying to do with our program, and that sort of takes care of itself.

“You don’t want to be up 70-0 on somebody and that’s not the game we really want. But that’s the game we’ve been dealt, because of scheduling teams and whatever. So, I never want to have to tell a player to not do their best. So, we try to get as many subs in.”

On the ensuing drive, the Panthers were able to get their first, and only, first down of the night. After a 25-yard quarterback keeper, the Panthers were in Crusaders’ territory for the first time. But after a bad snap, OCA’s Calen Schmidt took advantage, knocking back the Panthers for a loss. The sack helped stall the FCA drive and despite their best field position of the game—just outside the redzone—the Panthers were unable to score.

The Crusaders didn’t take long to respond, as fullback Logan Forella bounced out left and crossed midfield with a long gain. The very next play, Forella took the ball again, bouncing to the right this time, and scampering for the 43-yard score. The two-point conversion made it 48-0, heading into the half.

The second half opened with a running clock, as OCA stopped what had begun as a productive Panthers drive. Getting the ball back after a punt, senior running back Sherrick McGill found a seam and went 60-yards for the score. On senior recognition night, seeing many of his 11 seniors shine was a special moment for Pierce, who had their help growing the Crusaders program.

“We’ve got a good team. We’ve got probably half our team, this was really their first football experience, and you might not know it, because we’ve been working on it really strong.”

It wasn’t only the seniors though who showed up in big moments. With the Panthers looking to find some sort of momentum, they hung a deep pass over the middle of the field. OCA junior safety Jordan Raines tracked the ball like he was in centerfield, then zig-zagged his way deep into Panthers’ territory with the interception return. A penalty brought OCA back to the 46-yard line, but that was where quarterback Daniel Young was able to take the keeper to the endzone for the score.

By this point, up 64-0, the only question remaining in the game was whether or not the Crusaders would ever attempt a point-after kick, or continue to try for a two-point conversion (of which they went 8-8 on the night).

“We’ve got a decent kicker that just came back; he hasn’t had time to practice or anything. He’s just coming back from surgery, from an injury. And so—and we typically have a good running attack. So, we look at it like, instead of going for [the PAT] and a lot of things can happen with a snap and the placement and all that, we like to go for two and if we get 50% it’s like kicking everyone.”

After another touchdown, the Crusaders elected to take a knee instead of trying for the two-point conversion.