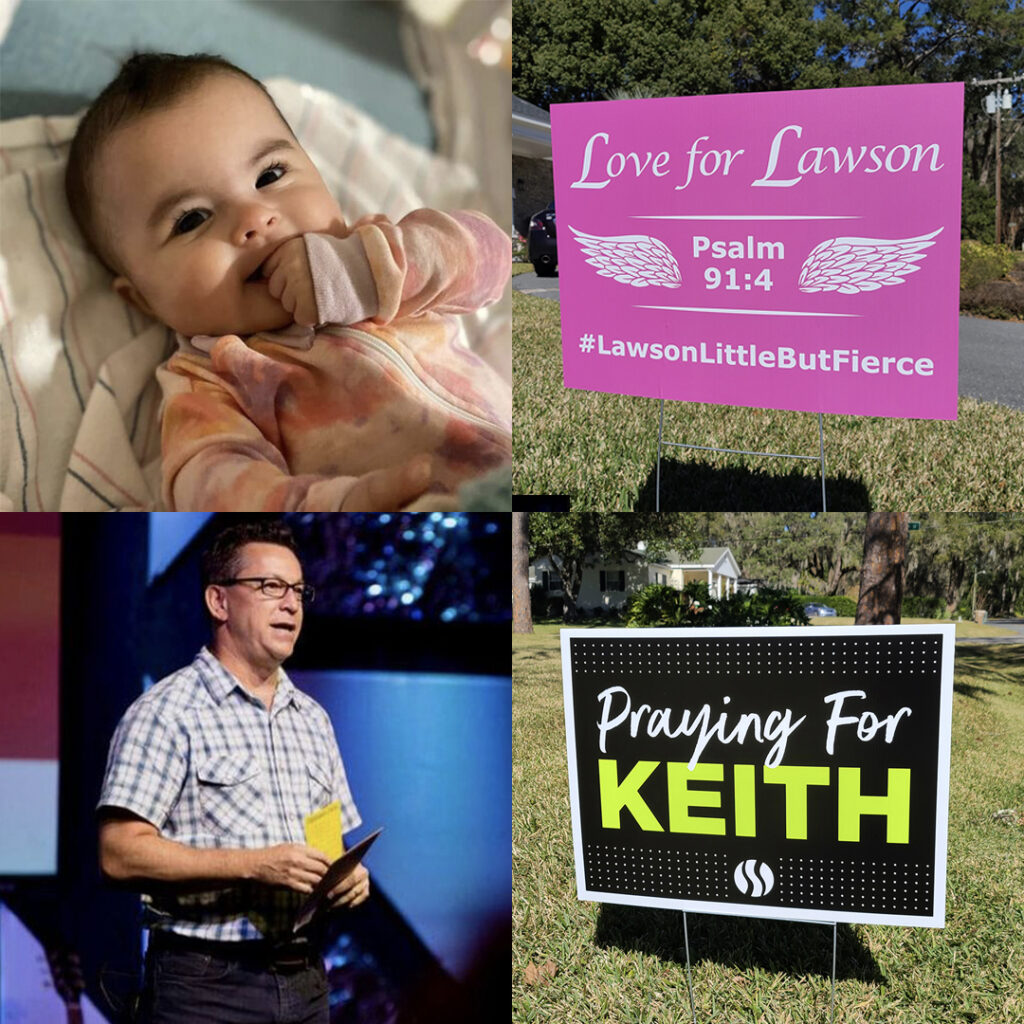 As election season wrapped up and most political yard signs disappeared, a new crop of yard signs began springing up in Ocala.

Yard signs with a message took over the landscape.

The phenomena traces back to the “Faith Over Fear” campaign that blossomed around the country last spring. The signs began popping up locally around April and are still popular.

Serving as a token of encouragement through the uncharted waters of a global COVID-19 pandemic, the “Faith Over Fear” effort proved how widespread a grassroots campaign can become. 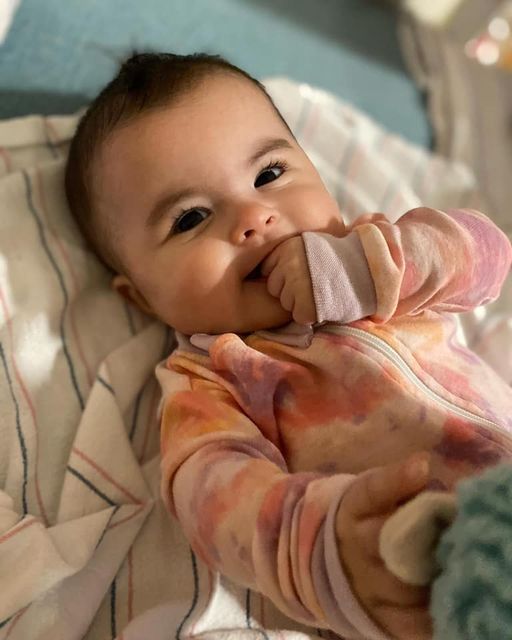 In Ocala, supporters of Lawson Armstrong and Keith Duncan took note. They ran with the idea and produced yard signs of their own to raise donations and garner prayers for their loved ones facing health challenges. The city and the county only require that the signs are not a hazard and stay off the right of way.

Born in August, Lawson Armstrong suffers from bone marrow failure. As a result, her immune system lacks the ability to fight off germs.

Lawson and her parents, Jessica and Sam Armstrong, are now staying in isolation at Boston Children’s Hospital. But in Ocala, Lawson’s grandparents, Kelly and Jose Juarez, alongside a team of supporters are using “Love for Lawson” yard signs to help raise money to pay for treatment and ask for prayers.

Karen Buss, a family friend of the Armstrongs, helped spearhead the outreach.

“We are helping them with awareness for Lawson’s condition and gathering a big group of prayer warriors,” Buss said. “That’s the first thing.” 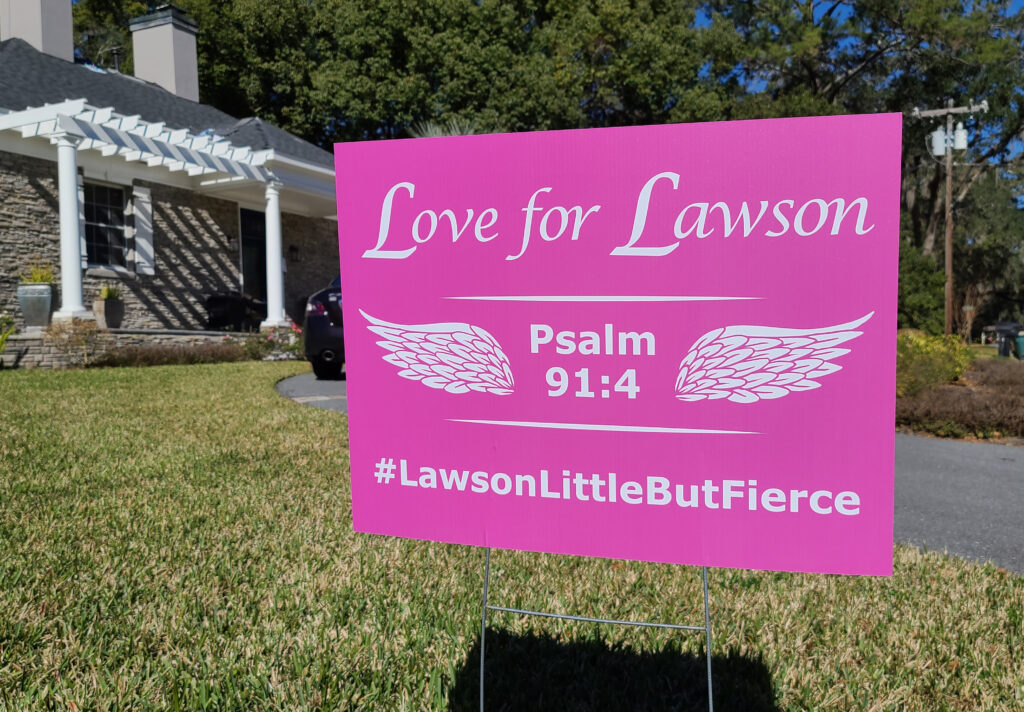 So far, about 300 signs have been sold at $20 each, but total donations from the signs have totaled $11,000. Another $54,000 was raised through GiveSendGo, an online fundraising site.

“It’s been a great fundraiser for them,” Buss said. “There are so many unknowns… it’s going to be years of care.”

The response to the signs has buoyed the family.

“Jessica has said that they’ve found peace in the process knowing they are surrounded by love and support,” Buss said.

Lawson’s 4-year-old sister Peyton keeps an eye out for the signs.

Each time she sees one, she says, “They love my sister,” according to Buss. 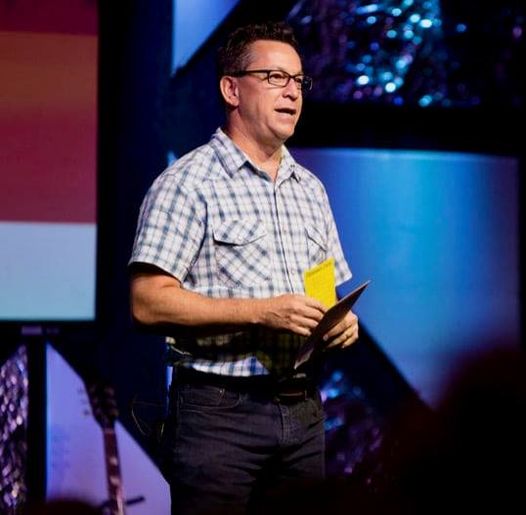 Keith Duncan, who serves as a business administrator and pastor with the Church @ The Springs’ Southwest campus, has been battling COVID-19 complications for more than a month. He remains hospitalized and on a ventilator.

Duncan’s wife, Deanne, suggested the yard sign idea to other leaders in the church, who quickly brought the vision to life.

Jacob Fields, owner of JJ Fields, an Ocala-based graphic design and printing company, received a call on a Tuesday afternoon. By that Wednesday evening, a company in Texas was printing 1,200 “Praying For Keith” signs.

Now, the signs are scattered all around Marion County, and a few across the country.

For Fields, who has known Duncan for 15 years, the project was personal, but others also were touched by Duncan’s struggle. 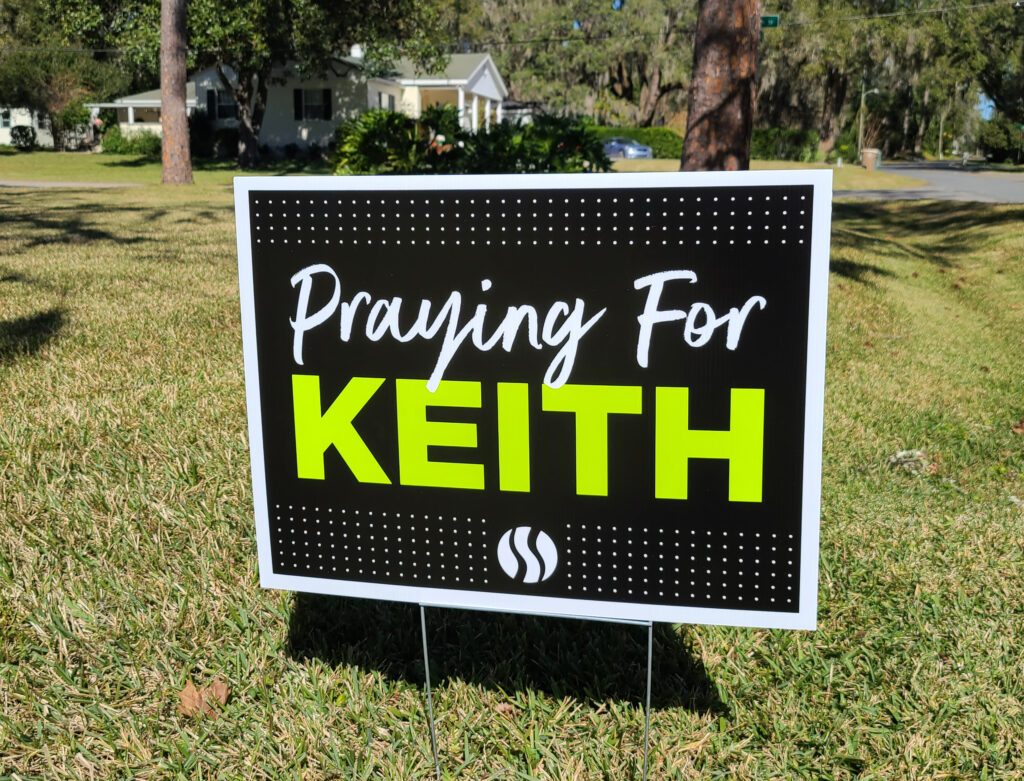 “Everyone who heard Keith’s story went above and beyond in their work to get this job done,” Fields said.

Ron Sylvia, the lead pastor at the church, said the signs went quickly.

“It’s crazy how this has taken off,” Sylvia said. ““It is kind of wild seeing the community come together.”

Sylvia said Duncan is aware of the outpouring of support. Recently, Duncan was briefly removed from the ventilator. He was able to whisper, “Community,” Sylvia said.