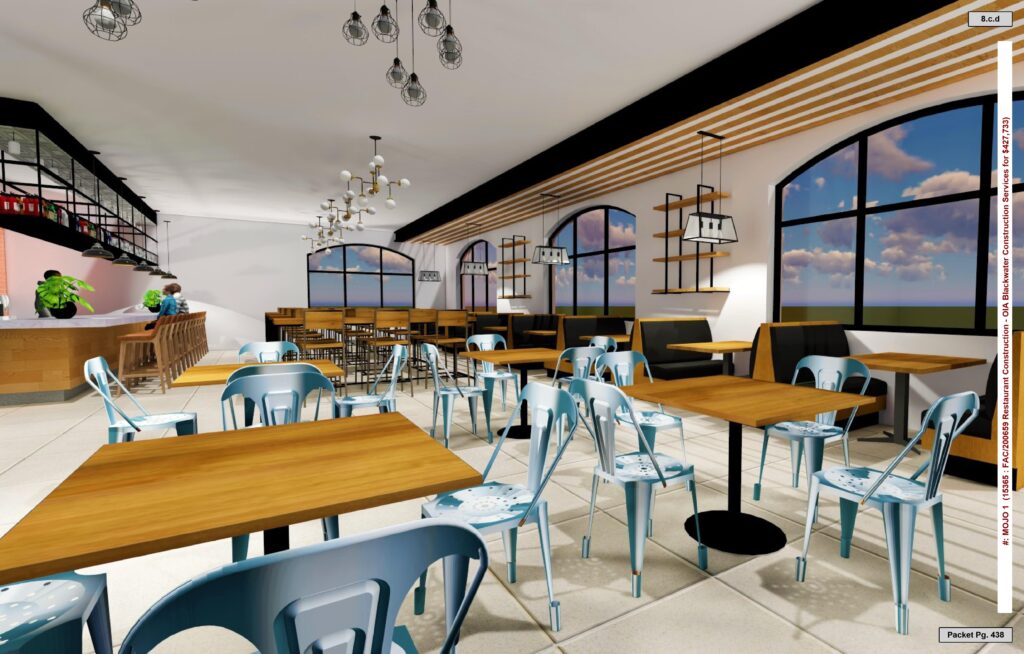 Attention diners, the new restaurant at the Ocala International Airport terminal is preparing for take-off.

Elevation 89 at the Ocala Airport, which pays homage to the elevation at which the airport sits, will serve breakfast, lunch and dinner once construction finishes.

On Jan. 19, the Ocala City Council approved construction of the interior space, which has remained unfinished since the $7 million terminal opened last February. The council agreed to pay $427,733 to Blackwater Construction Services for the buildout of the 3,300-square-foot space.

While Blackwater Construction will put in floors and walls, a local partnership featuring a couple of accomplished Ocala restaurateurs will create the restaurant.

Fernandez is known for his chain of Mojo’s restaurants. Wilson, managing partner of the project, is no stranger to the Marion County dining landscape either.

Wilson has spent much of his focus in the south end of the county, where he and his partners transformed Weirsdale’s County Line Bar and Package into County Line Smokehouse and Spirits three years ago.

When Wilson took on that project, the County Line didn’t serve food.

“We’ve come so far in three years that we have our restaurant license now,” Wilson said. “That’s how much food we’ve done there. We went from zero food sales to 50% in three years.”

And now, just six miles from the County Line, Wilson and his partners are set to unveil The Anchor in Summerfield on Feb. 1.

Previously known as Fat Daddy’s of Summerfield, Wilson hopes to meet the needs of the community.

The former establishment, along with two surrounding properties, was purchased by Wilson and his partners and the restaurant was completely renovated. An area behind the restaurant will eventually feature live entertainment space, a screen room and cornhole and other yard games.

“It’s really going to be a nice complex whenever we are done with it,” Wilson said.

They put in about $200,000 to renovate the former Fat Daddy’s, and Wilson expects to spend about the same for Elevation 89.

The airport eatery will seat 80 patrons and include a bar area.

However, Elevation 89, which is set for a late summer or early fall opening, will provide different challenges for Wilson and the team.

Not to mention how COVID-19 has affected the traffic at the Ocala International Airport.

“Obviously with COVID, it was hurt,” Wilson said. “Prior to COVID, traffic was up and continued to go up. I think it’s rebounding now with the (World Equestrian Center) opening and COVID slowly going away.

“I think you’re going to see a boom after COVID, too. You’ll see a ton of demand after COVID. I think we’re going to open at the airport and these other places at the perfect time. I think there’s going to be a lot of pent-up demand.”