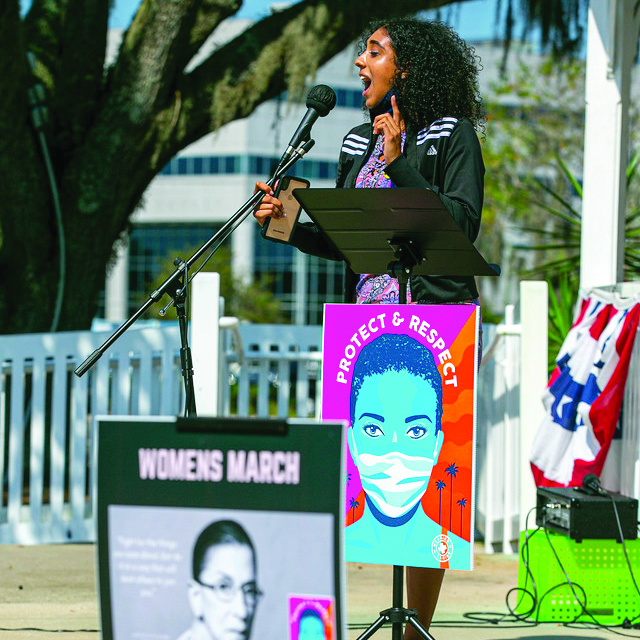 University of Miami sophomore Abigail Adera talks about keeping the work of Supreme Court Justice Ruth Bader Ginsberg alive as women congregated on the Downtown Square during the Democratic Women’s Club of Marion County’s March for Peace in Ocala, Florida on Saturday October 17, 2020. The group brought together a number of organizations and speakers to talk about women’s empowerment and support Joe Biden and Kamala Harris. [Alan Youngblood/Special to the Ocala Gazette]

The National Women’s March that took over the downtown square in Ocala last Saturday was both a call for women’s empowerment and a vigil honoring one of the greatest women’s rights advocates of the time, organizers say.

More than 150 women – and a sprinkling of men – descended on the square to honor Ginsburg’s legacy and to encourage young women, in particular, to continue the fights the late Supreme Court Justice Ruth Bader Ginsburg started for economic, social and political equality.

“I hope it accomplished more women’s empowerment,” said Francine Julius Edwards, a community activist and regional chair of the Democratic Women’s Club of Florida. “We hope young women will be empowered to be aware that politics starts at home, and that they should be aware of who they’re voting for at the polls and what those people stand for.”

Edwards has a special fondness for the late Supreme Court justice. She recounted how her mother, a Navy wife, wasn’t allowed to have credit in her name, so when the family car died, and Edwards’ father was serving overseas, her mother wasn’t able to go buy a new vehicle.

Ginsburg, through her work in the private sector and alongside the ACLU, helped eliminate many of those barriers.

“When the justice passed, my mother doesn’t cry very often, or at all, but she was quite upset,” Edwards said.

Saturday’s gathering featured an array of speakers from different walks of life, including college students and seasoned political and legal experts.

And while it was ostensibly nonpartisan, the march nonetheless drew a sizable cadre of Democrats in support of Joe Biden for president.