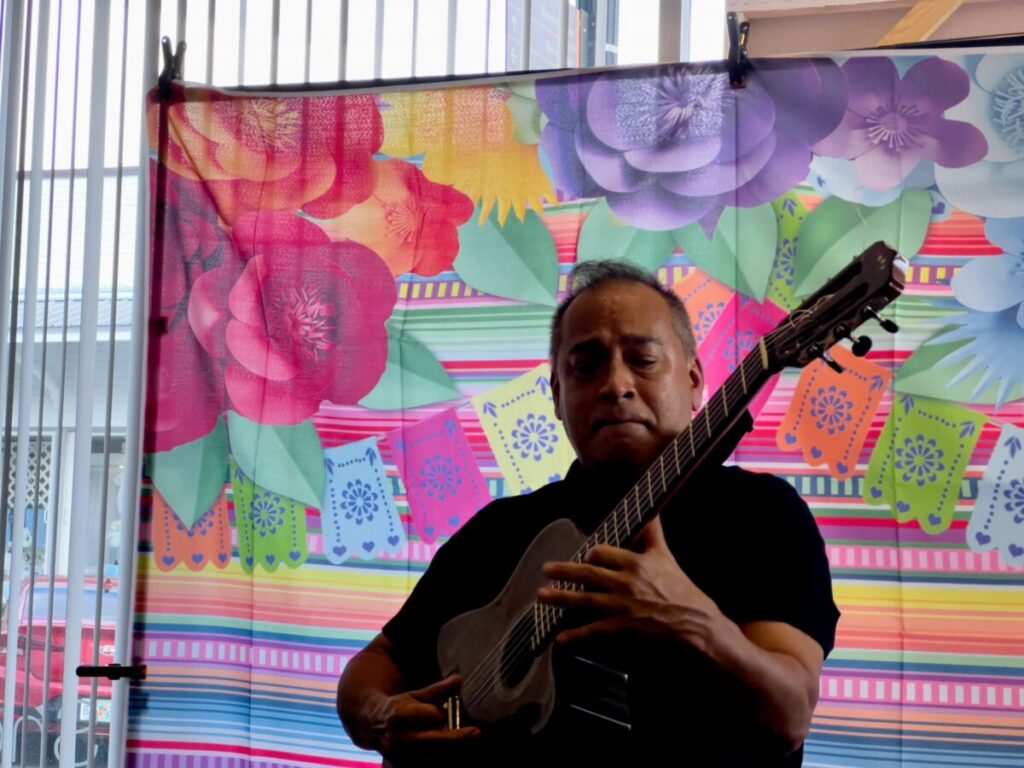 Castañeda serenaded the crowd at the MCA’s “Arte Hispano” opening reception at the Brick City Center for the Arts earlier this month. Photo by Julie Garisto

Birds of many a feather flock together in Nino Castañeda’s musical repertoire. The jazz guitarist has become a self-styled specialist in Spanish/Latin styles, from bolero to rumba to cumbia to Afro-Cuban jazz.

He also plays rock, blues and even some folk music. Genres from around the world inform his nimble fingers as he works the frets of his acoustic and electric guitars.

While Castañeda deftly proves his musicianship while performing, he also knows how to set the mood for whatever occasion he’s playing, whether he’s gently strumming instrumentals at an art show, such as the recent “Arte Hispano” opening event at the Brick City Center for the Arts, or ramping up the crowd with the rum-bum-bum and clang-clang-clang of timbales, congas and cowbell.

He plays solo shows with his acoustic and tracked recordings, in a jazz trio and a six-piece band for concerts and festivals such as the Clearwater Jazz Holiday and the Jacksonville Jazz Festival.

“We do some vocals, but not a lot,” Castañeda clarified. “I do sing a little bit, but it’s mainly instrumentals.”

Castañeda moved to the Ocala area around 17 years ago. The consummate musician earns a living as a real estate broker in his other, more buttoned-down life.

An avid fanbase shows up for his weekly Tuesday night gigs from 6 to 8:30 p.m. at Morevino in downtown Ocala, where he performs bossa nova, jazz standards and other swaying styles with his trio, which includes Richie Skraybar on bass and Jonathan Hurst on drums.

He’s also working on a new record featuring original music. To get a sense of his mix of jazz and Latin styles, check out Castañeda’s shimmering “Dance of the Tainos.” The sinewy tune evokes dance parties by the Caribbean surf with island rhythms complemented by melodic jazz guitar licks. The tune can be heard on Castañeda’s Soundcloud page at soundcloud.com/tim-castaneda-343436775.

The musician with Mexican roots grew up in Chicago in a musical and artistic family.

“We had a big family, nine kids,” he reminisced. “Thank God my parents took us out with them. … whether it was weddings or concerts, we would go.”

Having started out young, he was already playing live gigs at 15. He attended a fine arts school in Milwaukee and was heavily influenced by his jazz-guitarist instructor and later moved to New York, where he got to perform with headliners such as Cuban-born singer and actor Maria Conchita Alonso, now-deceased 20th-century legends Leonardo “Kike” Vega from Ecuador and the “Cuban conga king,” Carlos “Patato” Valdez.

“I think the fact that I like all these styles — jazz, rock, country, blues,” he said.  “I combine ’em all together and mix them into something new.”