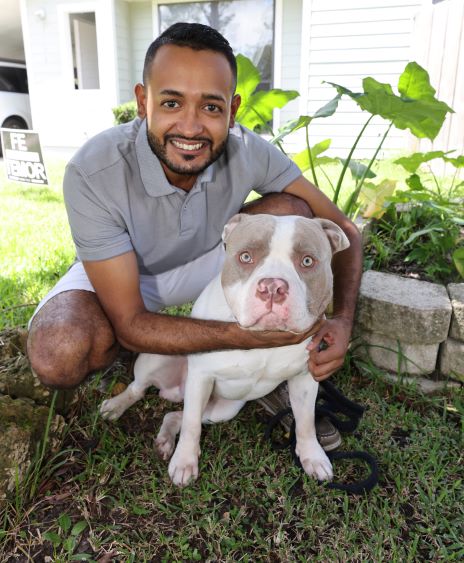 Anderson Vasquez poses for a photo with his dog, Ankal, a one-year-old Bully Standard, at his home in the La Jolla subdivision in southwest Ocala, Fla. on Tuesday, Sept. 20, 2022. [Bruce Ackerman/Ocala Gazette] 2022.

The Vasquez family is from Medellín, Colombia. They have settled in Ocala and are making this their home.

Anderson Vasquez said that he, his brother Julian and their parents moved from Colombia because of the high crime rate there, adding that it was not a good place to grow up as kidnapping was common, as well as other crimes.

Vasquez said his grandfather immigrated to Miami in 1989 and his father moved there in 2001. In 2004, the rest of the family moved there. He said he was 13 years old at the time.

The family stayed in Miami for two years but felt uncomfortable there, too, when the area they lived in also showed signs of increasing violence.

“The girls there were even carrying knives,” Vasquez lamented.

Another family member lived in Ocala and invited them to visit to see the area. It was much more rural than what they had been used to, Vasquez said.

The family moved to Ocala when Vasquez was 15 years old and they loved it right away, he said.

He graduated from West Port High School, where he was on the varsity soccer team in 2002 when the team won the county championship.

Because of the moves, Vasquez said he has become fluent in three languages: Spanish, which was the predominant language spoken in Colombia; Portuguese, which is spoken in Brazil and he had several Brazilian friends in Colombia; and English, in which he became more fluent while a student at West Port.

“Spanish and Portuguese languages are a lot alike,” he said.

Vasquez attended F.I.R.S.T. Institute, an entertainment and digital media school in Orlando for a semester, studying music production and sound engineering. After he injured his back in a car accident, he could not work and had to stop his schooling. He said it was a difficult time for him until he was able to regain his health.

Vasquez is the single parent of daughters Sofia Marie, 10; Anaey, 8; and Keilani, 4.  His parents share a home in southwest Ocala with him and his children, along with an unusual dog Vasquez received for his birthday last year.

The dog is an American Bully, which is a hybrid of the American bulldog and a mastiff. The breed, Vasquez explained, can be one of three categories: the exotic, which as an adult dog would grow to 20 to 30 pounds; the standard, which will weigh in from 40 to 50 pounds; and the extra-large, which can weigh up to 120 pounds. Their dog is the standard hybrid and, at 8 months old, already weighs about 50 pounds, Vasquez said.

“He has a very good personality,” he said, adding that the dog’s coloring is tan and white, he has a large head, is of fairly short stature and is very strong. “I can’t let my girls walk him on a leash anymore. He is stronger than they are!”

The family loves the area, Vasquez remarked, because “there is so much to do here. The potential of Ocala is so good. Both coasts can be reached in only about 45 minutes and Orlando is only an hour away. Tampa only an hour and a half. There are great beaches in Clearwater and Daytona, and Crystal River is great.”

Vasquez cited the geography of the area as being a benefit, too, in that the elevation and central location seems to lessen flooding and hurricane damage.

Vasquez describes himself as a people person who enjoys helping others.

His hobbies include music and spectator soccer, and he loves history and geography.

He is a realtor for Calesa Township, being developed by Colen Built Development, which also developed the On Top of the World Communities in Ocala. Calesa is a family-oriented community, Vasquez said.

“Being in real estate here, there is much growth opportunity personally and in business,” he said, adding, “and there is the possibility of a better life here for my daughters.”