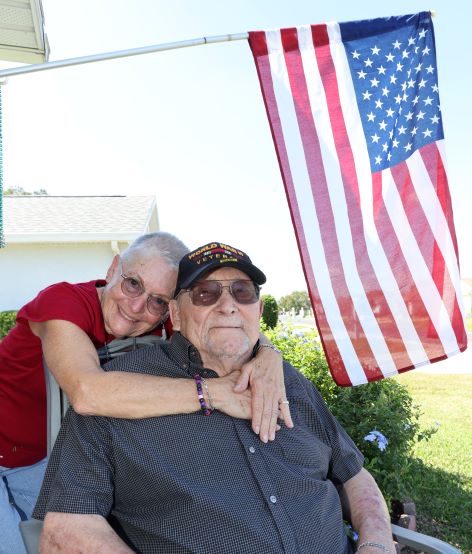 Elmo and Judy Berthelot pose for a photo at their Ocala Palms home in Ocala, Fla. on Tuesday, Nov. 1, 2022. Elmo, 94, a World War II veteran who served in the U.S. Army, was diagnosed with Alzheimer’s Disease 25 years ago. [Bruce Ackerman/Ocala Gazette] 2022.

Home » Health
Posted November 2, 2022 | By Marian Rizzo/Special to the Gazette

A Walk to End Alzheimer’s is expected to draw nearly 300 people to the World Equestrian Center on Saturday morning as family members, friends and members of the medical community rally to show their support for treatment of the disease.

The walk takes place annually in nearly 600 communities nationwide, said Carly Wille, senior development manager of the Alzheimer’s Association Central and North Florida Chapter. The local chapter’s walk has raised a little over $63,000 in donations toward the goal of $115,000, Wille said on Monday. The fundraiser will continue until Dec. 31, she said, with 100% of the money going to the Alzheimer’s Association.

Among Saturday’s walkers will be Judy Berthelot. Over the past 20 years, she said she has watched her husband, Elmo, gradually decline from a live-wire personality who enjoyed dancing, playing golf, and playing pool. Today, she said, he is listless and fragile, unable to even  shower without assistance.

Elmo, who will turn 95 on Nov. 27, also has been diagnosed with congestive heart failure and COPD. He goes to Blessed Trinity Elder Care Center two days a week, but he doesn’t play cards anymore. At home, he spends much of his time watching old reruns on television.

Diagnosed with Alzheimer’s disease in 2000, Elmo started showing signs of cognitive impairment about three years before he was diagnosed.

“I saw and heard a different Elmo,” Judy recalled. “He wasn’t the same person. His speech and thought patterns showed lack of concentration. I knew something was different about him, but I didn’t know what. In 1997, Alzheimer’s was not a big word. Nobody talked about it or knew very much about it.”

About that time, Judy learned about a cognitive study that was being conducted in Tampa, only a two-hour drive from their home in Ocala. She made a call and Elmo was accepted into the clinical study at Suncoast Gerontology Center (now part of the USF Health Byrd Alzheimer’s Center and Research Institute). Patients received either a placebo or the drug Aricept (donepezil), Judy said.

“Even though it was a blind study, Elmo’s test scores over three years continued to improve,” said Judy. “By getting him in early, I saw changes in him that he wasn’t declining. He wasn’t jumping up and clicking his heels, but after three years we should have seen something negative and we didn’t.” 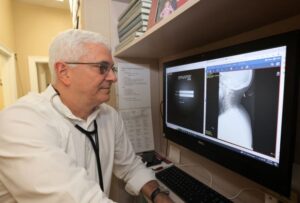 “Alzheimer’s basically doubles its presence every five years after age 65,” Gaudier said. “By age 70, it is 5%, at 75, it’s 10%, at 80, it’s 20%. The most common presentation is when family members bring in the patient that is being forgetful. We couldn’t take care of patients without their families.”

The former president of the Marion County Medical Society, Gaudier has been practicing medicine in Ocala for 31 years and recently began limiting his practice to outpatient services. About 35% of his patients have some form of cognitive problems, he said.

Though there currently is no cure for Alzheimer’s disease, Gaudier explained that ongoing studies tend to favor drugs that target microscopic clumps of the protein beta-amyloid. Testing can include spinal taps, blood tests, MRI’s, PET scans, and metabolic studies of the brain; however, they’re not always effective and they can be expensive, he said.

While studies are being done on a number of different drugs, Gaudier said the medicine more commonly used is donepezil (Aricept).

Named for a German physician, Dr. Alois Alzheimer, who first described the disease in 1906, the malady destroys nerve cells, which causes memory failure and changes in personality, according to the National Institutes of Health, National Center for Biotechnology Information.

According to the Alzheimer’s Association website, Alzheimer’s is the most common type of dementia, accounting for 60 to 80% of dementia cases. More than 6 million Americans are currently living with Alzheimer’s disease, and the majority of patients are over age 65.

John Renyhart knows what it’s like to care for a family member who has dementia. Renyhart’s wife, Nancy, died in 2020 after struggling with Alzheimer’s for nine years.

A hospice volunteer, Renyhart established an endowment for dementia education in his wife’s name. He currently leads a support group for caregivers.

“The first time they walk through the door, they find out they’re not alone,” said Renyhart. “The best admonition we give to the caregiver is, ‘You need to take care of yourself first.’ They cannot be effective in their role if their own health is threatened.”