Vanguard makes it three straight with 13-6 win over Dunnellon 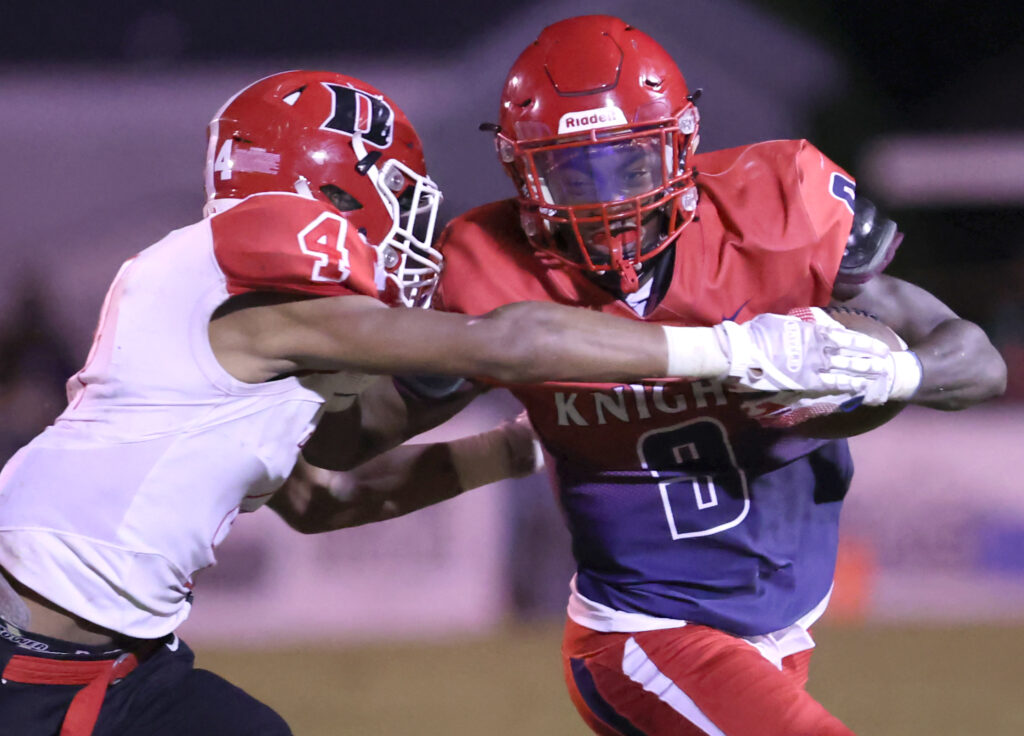 Vanguard’s Dewhitt Betterson (9) battles for yardage as Dunnellon’s Jaden Dyer (4) tries to stop him during a football game at Booster Stadium in Ocala on Friday. [Bruce Ackerman/Ocala Gazette]

The visiting Dunnellon Tigers would strike first in Friday night’s high school football game at Booster Stadium, but it would be the host Vanguard Knights who’d score 13-unanswered points to take the win, 13-6.

Vanguard (3-0 overall record) extended its win streak, while Dunnellon moved to 0-2 on the season.

Knights head coach Edwin Farmer, who wasn’t entirely pleased with his team last week, despite defeating West Port handily 21-0 on the road, saw more of what he was looking for against Dunnellon on Friday.

“Every week you’re looking to get better,” said Farmer, “and this week I think we were a lot better. Defense played great again. We’re moving some guys around. And we had some guys step it up.”

After a scoreless first quarter, Dunnellon found the end zone first to open the game’s scoring after a 14-play drive with 3:15 remaining in the half.

Quarterback Trent Townsend (9-for-17 passing in the game for a total of 108 yards in the air) hit wide receiver LJ Fitzpatrick for the 15-yard touchdown pass, putting the Tigers up 6-0. Vanguard’s defense blocked the extra point.

Townsend also rushed for a total of 54 yards in the game and threw two interceptions.

Farmer said he wasn’t worried after Dunnellon scored first in the game. He said he almost preferred it that way.

“I like it when that happens,” he said. “Because it gives us a chance to show our character. And we didn’t buckle… They [scored first], but then they woke up the sleeping giant.”

Dunnellon’s LJ Fitzpatrick (1) battles for extra yardage as he is stopped by Vanguard’s Emile Sancho (5) and Markell Davis (24) on Friday. [Bruce Ackerman/Ocala Gazette]

Vanguard answered on its next possession, scoring on a 13-play drive of its own with 39 seconds left in the second quarter.

Wilcox would pad Vanguard’s lead at 6:33 of the third quarter as well when he nailed a 22-yard field goal, making the score 10-6.

Early in the fourth quarter, Vanguard seemingly scored a second touchdown after Gaskin handed the ball off to Dewhitt Betterson Jr., who ran it 56 yards to the end zone. But the play was called back after a holding penalty.

Gaskin went 12-for-23 in the air for a total of 61 yards. He had 14 yards on the ground and threw two interceptions.

Dunnellon had a late drive going with 1:24 left in the game, but on fourth down from the Vanguard 40-yard line, Vanguard’s Jaylen Williams sacked Townsend turning the ball over on downs.

Vanguard ran the clock out to end the game.

Dunnellon head coach Price Harris was pleased with how his team battled on the field Friday night, no matter the score.

“They made more plays than we did,” said Harris. “But it was still close. I mean, if you don’t go to a Vanguard-Dunnellon game—you’re missing out.”

Harris said he saw growth from his team in Friday’s effort.

“I saw some bright spots out there,” said Harris. “We’re getting some experience playing against great teams, and we’ll continue to get better and better. Hopefully we’ll work more of these kinks out going into next week’s game.”