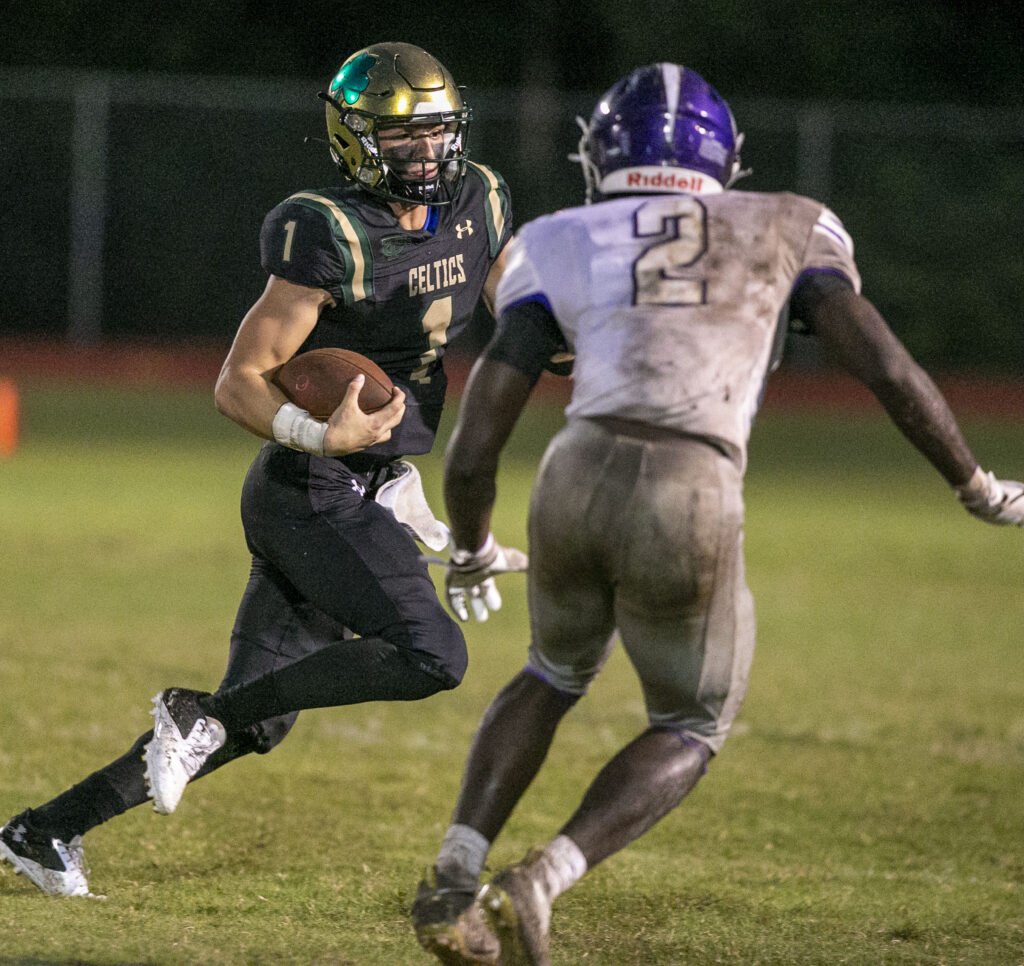 Late in the first quarter, both teams scoreless, Trinity faced a fourth and goal from the 15-yard line. The Celtics elected to kick the 32-yard field goal and took the early 3-0 lead.

Midway through the second quarter, Trinity’s Elijah Russell sacked Gainesville quarterback Ryan Nolan, bringing up a long second down. Then, two gashing rushes picked up 25-yards for GHS. Then the visiting Canes spent the next three plays trying to give up the ball, falling on two botched snaps, then letting a third roll close to 30-yards downfield.  Nolan chased down the loose ball, but the Celtics’ Russell brought Nolan down for another sack and massive loss.

A late hit by the Celtics though gifted the Canes 15 of those yards back. However, so much yardage had been lost, the opposing team was still forced into a long fourth-down punt.

A great return by the Celtics was negated by a block in the back, putting Trinity Catholic at their 8-yard line.

On the first play of the drive, however, Celtics’ quarterback Cole Gonzalez threw an interception, giving Gainesville possession in the red zone. Gainesville walked into the end zone untouched up the middle, for the 10-yard touchdown—the only one of the night—and the 7-3 lead.

Trinity’s Brice Summerall answered on the ensuing kickoff, bouncing his way through the defense and to the outside for a 100-yard kickoff return. But again, it was for naught, as a holding penalty on the Celtics negated the touchdown and put the home team back deep in their own territory.

“It’s bothersome,” said Celtics head coach John Brantley after the loss. “(Penalties) hurt us last year too in critical times; we make, you know, we have silly penalties and make silly penalties.”

Hoping to strike quickly before halftime, Gonzales sent a 50-yard pass over the middle of the field, but it needed to travel just a couple more yards

A Gainesville defender picked off the pass and returned almost 62-yards.

Time was on Trinity Catholic’s side, however, as the Canes were unable to get a field goal off before halftime. The Celtics went to the locker room down 7-3. 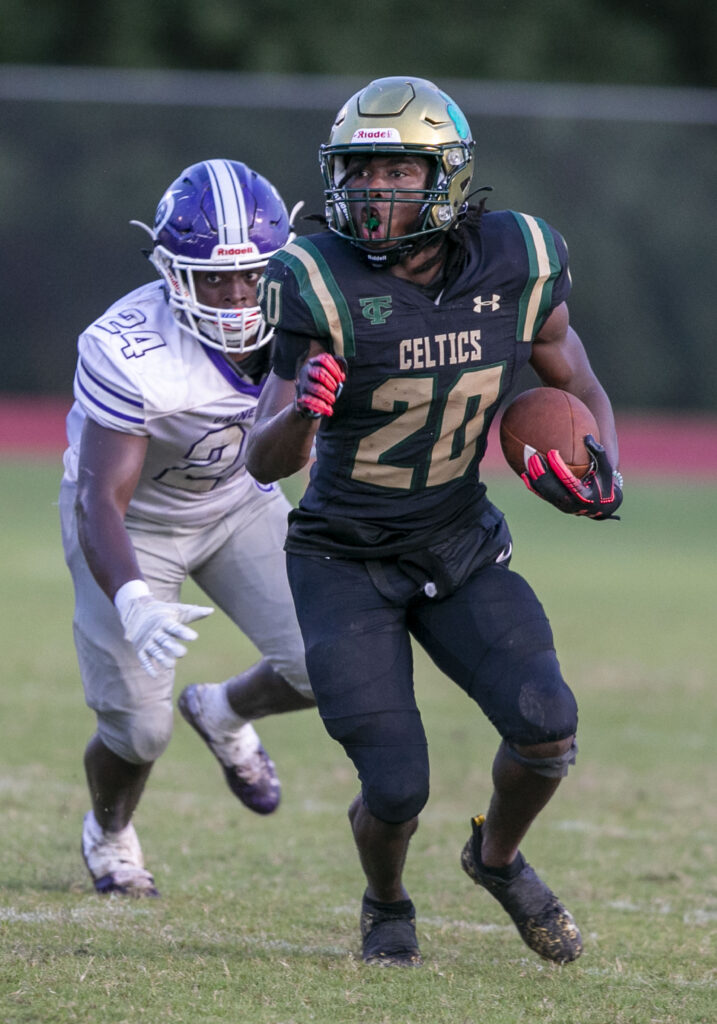 In the third quarter, the Celtics flashed some big plays, including a 49-yard keeper by Gonzalez and a Kayden McCarson interception. But they also were plagued by stalled drives and interceptions of their own.

With just more than 10 minutes remaining, Trinity’s Tyler Simms sacked Nolan for a loss. On the ensuing offensive drive, facing 4th-and-10 from the 23-yard line, Gonzales found Elijah Russell in the end zone for what appeared to be the go-ahead touchdown. The 6-foot-7-inch Russell easily beat his defender but landed just out of bounds.

Despite not scoring, Russell was a bright spot on both sides of the ball. Brantley plans on featuring the senior even more.

“He’s a special player,” Brantley said. “We got to find a way to get him more involved…we’re still learning our personnel and learning ourselves.”

As the game wound below two minutes, the Celtics rode Gonzales’ keepers and quick throws to the sideline to get downfield. On fourth-and-four from inside the red zone, Trinity came up two yards short of the first down.

Gainesville ran out the clock from there.

As the Celtics prepared to leave the field, Gonzales stepped into the middle of his offensive lineman; he apologized for any miscues, taking the blame, and thanking them for giving him room to work all night.

“I need about 12 more Cole Gonzales’s. But he tries to put too much on his plate. But I’ll tell you what, he’s a real asset to have as a quarterback,” Brantley said. “We got a lot of young players, and a lot of new players so I knew it would take us a while to mesh, and, and we’re seeing that process.”

Trinity Catholic will face Carrollwood Day at home on Sept. 17.