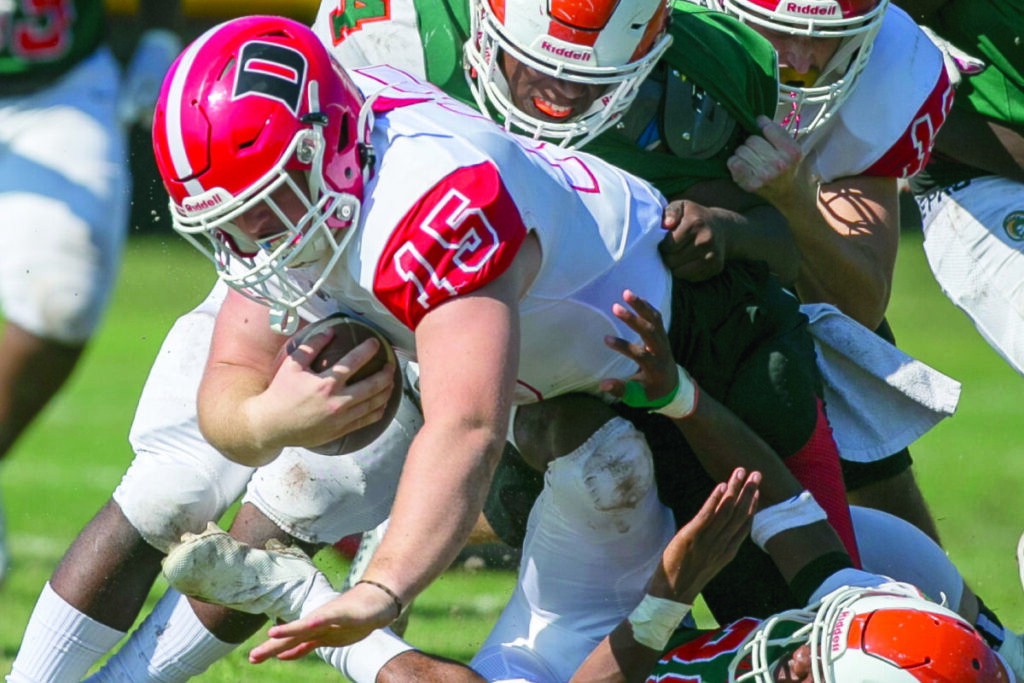 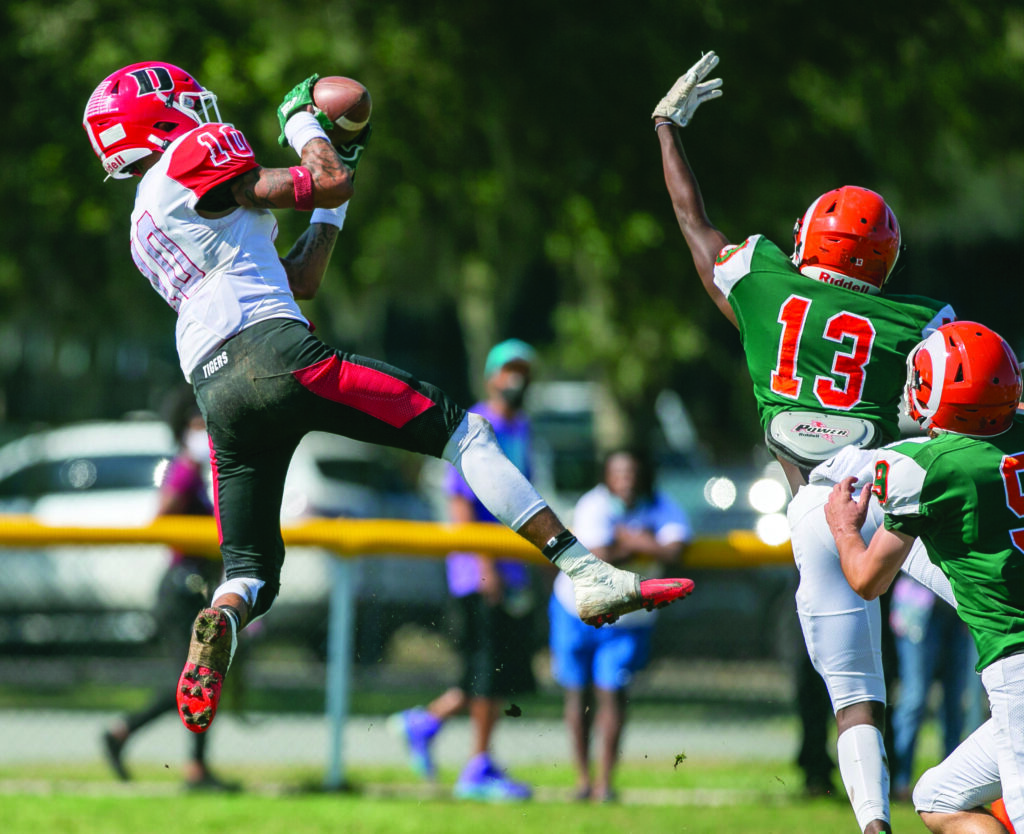 North Marion also wins as trio advance to second round of playoffs tonight; Forest out

Undefeated Dunnellon continued its rampage through Central Florida last week with a thrashing of Gainesville’s Eastside High School, 50-0, in the first round of the playoffs, setting up a rematch with the North Marion Colts this week.

Forest and Lake Weir didn’t fare as well. Forest dropped its playoff game to Edgewater of Orlando to finish the season at 3-4, while Lake Weir suffered a heartbreaking overtime loss to Atlantic.

Here is a closer look at last week’s postseason play and a preview of this week’s matchups:

With an undefeated record in the regular season, the Tigers of Dunnellon charged full steam ahead into the postseason, and Eastside simply had no reply.

As always, Dunnellon’s offense was led by quarterback Trent Townsend who racked up 147 yards passing and three touchdowns. His leading receiver was Julius Gardner with three receptions for 88 yards and two touchdowns, followed by Le’Var Fitzpatrick with 31 yards and one touchdown.

The Tigers were also formidable on the ground with 174 rushing yards. Demetrius McCants led the assault with 73yards, aided by Brody Luckey with 44 yards and Townsend with 23.

Remarkably, Dunnellon posted all 50 of its points in the first half, forcing the referees to start a running clock in the second half as Dunnellon rested their starters and gave theor underclassmen some reps.

Leading the way defensively for the Tigers was Avery Braden with eight tackles. Jermain Fashaw contributed another five and two interceptions. 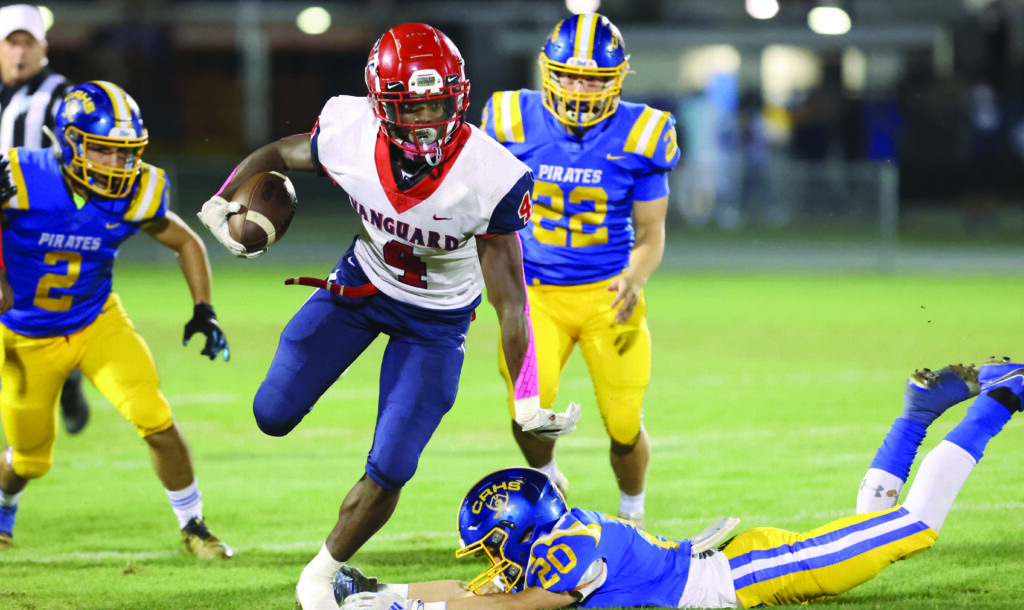 Having beat Belleview 38-13 in the last game of the regular season, North Marion knew exactly what to expect out of the Rattlers and used it to their benefit, blanking Belleview 47-0.

Although the Colts scored the first seven points in the first quarter, it was a rocky start with two turnovers. The first was a fumble and the second was an interception by Belleview’s Elija Turner.

Entering the second quarter, North Marion continued to drag a bit, but with five minutes left on the clock they added another six with a rushing touchdown, followed by a successful point after, bringing the score to 14-0.

North Marion entered the second half up 20-0. The Colts started to pick things up in the second half, scoring a five-yard rushing touchdown to push the score to 27-0.  As Belleview’s offense continued to struggle, North Marion’s defense came up with an interception for a touchdown

Up 41-0, the Colts threw for another touchdown in the fourth quarter. The crushing loss sends Belleview packing, ending their 2020 season with a record of 0-7.

Vanguard, having lost only to Dunnellon in the regular season, traveled to Crystal River to take on the Pirates, who had no answer for the Knight’s offense.

Vanguard’s Grandin Wilcox got the scoring started for the Knights with a 15-yard field goal, and it was all Knights from there. 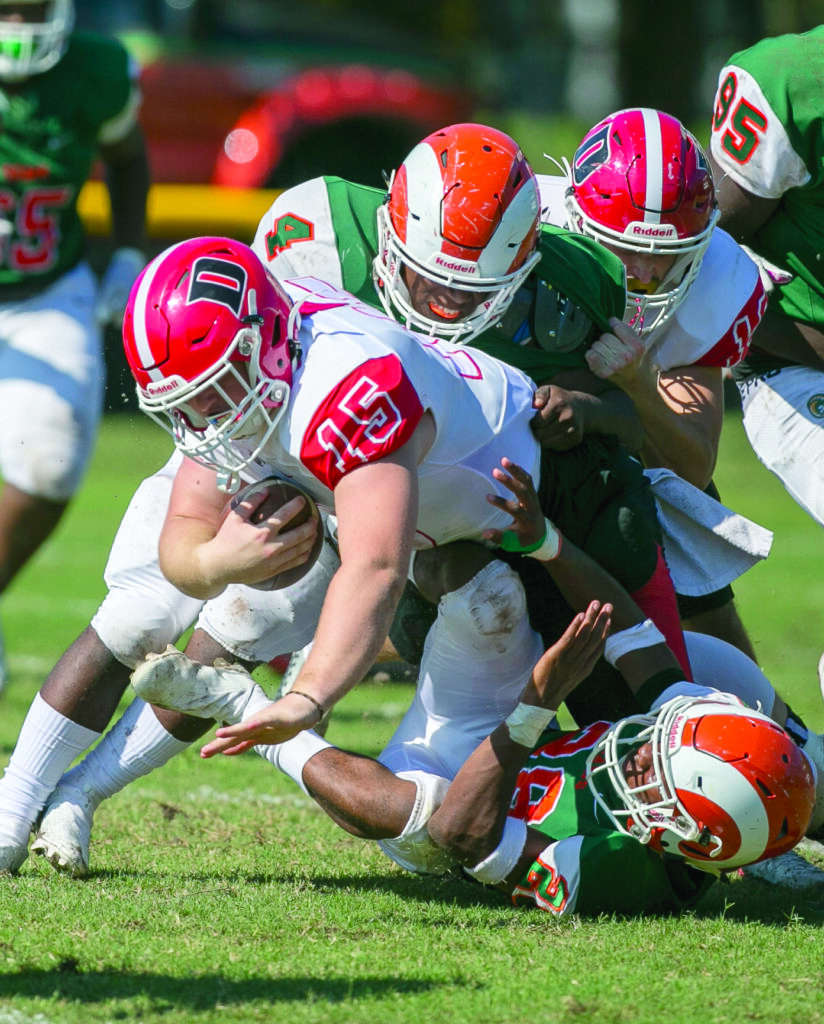 Following the field goal, Crystal River was unable to make anything happen and was forced to punt. Vanguard’s Dewhitt Betterson answered with a long run, setting up a 21-yard pass from quarterback Alexander Law to Tony Johnson for six. A missed point after left the score at 9-0 Vanguard.

Refusing to go down without a fight, Crystal River’s defense intercepted a Vanguard pass to end the first quarter; however, they were unable to capitalize on the turnover and were forced to punt.  Vanguard promptly marched down the field, ending the drive with one-yard touchdown run by Betterson. A failed two-point conversion left the score at 15-0.

Vanguard ended the second quarter strong, with their defense getting a safety for two points, followed immediately by Mykel Randall adding another six on a 70-yard kick return. The point after allowed Vanguard to enter halftime up 24-0.

Although the Knights slowed a bit in the second half, they put another seven on the board in both the third and fourth quarters for a final score of 38-0.

Vanguard’s offense was led by the throwing arm of Law, who threw for 131 yards, including 42 of those to Johnson. On the ground, Betterson led the charge with 70 rushing yards, followed closely by Tyrell Randall with 63.

The Knights’ defensive stance was led by Jordan Woods with five solo tackles and four assists, for a total of nine tackles on the night.

Finishing the regular season with only one win on the books, Lake Weir was hoping to turn things around in the postseason against Atlantic out of Port Orange. Turnovers, however, plagued the Hurricanes. 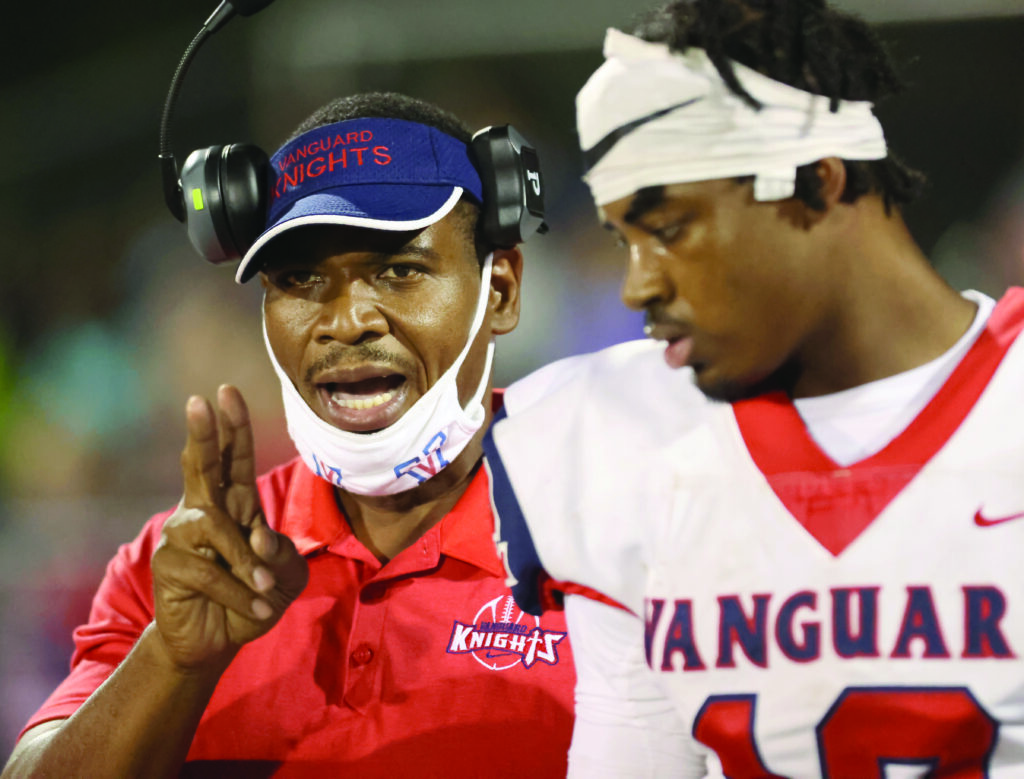 The defenses of both teams kept this game scoreless through all four quarters. forcing the game into overtime.

Lake Weir put the first points on the board in OT with a 23-yard field goal by Amari Kiner.   Unfortunately, the Sharks answered back with a touchdown for a final score of 6-3, concluding the Hurricanes 2020 season.

With their last two regular season games ending with a close loss of 10-7 to Marion County top dog Dunnellon and then a sizeable win over Lake Weir at 38-0, the Wildcats had high hopes for their postseason play; however, the Eagles of Edgewater had no plans of going down without a fight.

On paper, with comparable records, Forest at 3-3 and Edgewater at 4-2, it appeared the matchup would be a close game, but the Wildcats’ defense could not hold off the offensive front presented by the Eagles and Forest’s 2020 season came to an end.

Here’s a look at the upcoming postseason games:

Having advanced to the semifinals with a forfeit by Melbourne, Trinity Catholic faces Taylor out of Pierson on Friday night. Although these two have not played each other or any of the same opponents this season and have comparable records (Trinity: 5-3; Taylor: 6-3), Trinity carries the superior ranking in Class 3A (9th) into the game.

For this week’s quarterfinals matchup, Dunnellon will again travel. This time, however, the trip will be to familiar territory as the Tigers take on the Colts of North Marion in Citra on Friday at 7:30 p.m.

Having ousted North Marion 32-8 in the regular season, Dunnellon expects to dominate the matchup and move to the semifinals, where they would face the winner between Menendez out of St. Augustine and Orange Park.

Also, Friday at 7:30 p.m., Vanguard will have home field advantage against Ridgeview out of Orange Park.

And, although Vanguard opened the postseason with a definitive win, they will need to take better care of the ball in this Friday’s matchup. Unlike Crystal River, Ridgeview, with a record of 7-3, likely has the ability to capitalize on turnovers.

With fewer teams in the Class 8A bracket and a bye in round 1, West Port’s opening game of the postseason will be in the quarterfinals against the Hawks of Spruce Creek High School out of Port Orange.  The Hawks, with a current record of 5-3, will travel to West Port on Friday to take on the Wolf Pack, whose regular season record was 4-2. The game starts at 7:30 p.m.