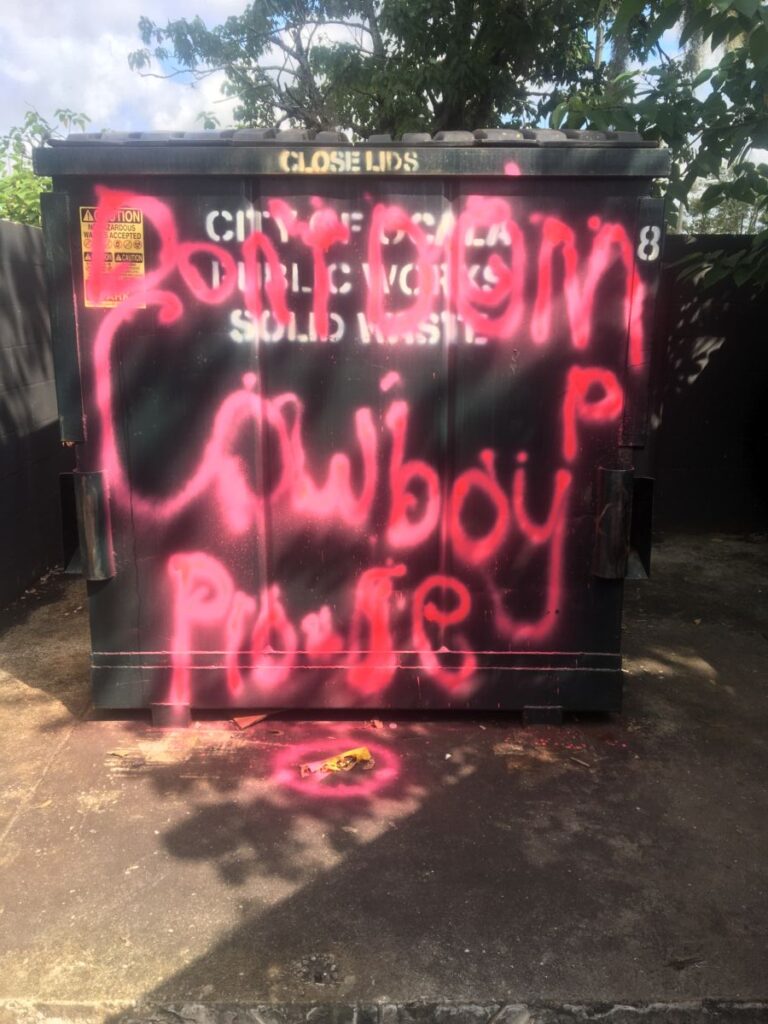 Vandalism of public parks cost taxpayers money, according to the U.S. Department of Justice, as well as mars a community’s image.

Ocala and Marion County Parks and Recreation [P and R] departments are both working diligently, day and night, to stem the tide of vandalism in local city and county parks, which, as Sara Johnson, community engagement coordinator for P and R in the county, admitted, can be very difficult.

“We never know when it’s going to happen,” said Johnson, “so we’re kind of always dealing with it.”

Within the past year, she said, statues in Veterans’ Memorial Park, as well as some other structures at Baseline Trailhead Park, had been marked with various forms of graffiti.

County P and R Staff aim to clean up such incidents as quickly as possible, Johnson said, adding, “that way it’s taken care of, and the general public can get out there and enjoy the park.”

Similarly, Parks Division Head for the City of Ocala Bill Rodriguez said that vandalism is something the city combats on a daily basis in its parks and something they try and remedy immediately upon discovery.

“The majority of it is graffiti,” confirmed Rodriguez. “Something we combat weekly. And our policy as far as graffiti is once we have a report of it or discover it, we try and remove it within 24 hours. The less graffiti you have out there, studies show, the less graffiti you’re going to continue to have.”

If graffiti is left where it is, added Rodriguez, it just attracts more graffiti to the park.

“It’s the broken windows concept,” he explained. “If you see one broken window, people think it’s okay [to break more windows]. If you clean it all up quickly, they begin to see their efforts are futile and they stop.”

Rodriguez conceded, though “graffiti is probably the biggest act of vandalism that we get in parks” in the city, “occasionally we do get some destruction of property in there—some worse than others—but it all depends on the time of the year, believe it or not, and what you exactly have going on at the time.”

The worst time of the year for graffiti in city parks, according to Rodriguez, is during the summer, when the most amount of kids are out of school.

“That is by far the worst time,” he said. “That two-and-a-half-month period, that’s when it really gets bad.”

Outside of the summer months, Rodriguez said he sees about a couple pieces of graffiti a month.

“It’s nothing that’s overwhelming,” he clarified, “but we can never drop our guard.” 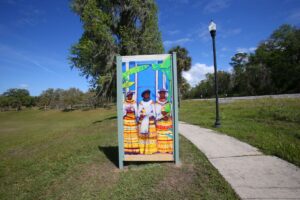 These murals by Jordan Shapot were initially installed at Legacy Park in March 2020 but quickly became subjects of vandalism. Shapot states that some were destroyed beyond repair, others were repaired and installed at Scott Springs Park. 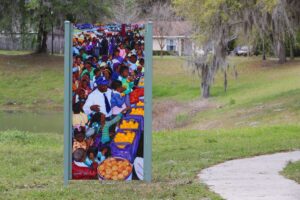