Up in arms over fire assessment 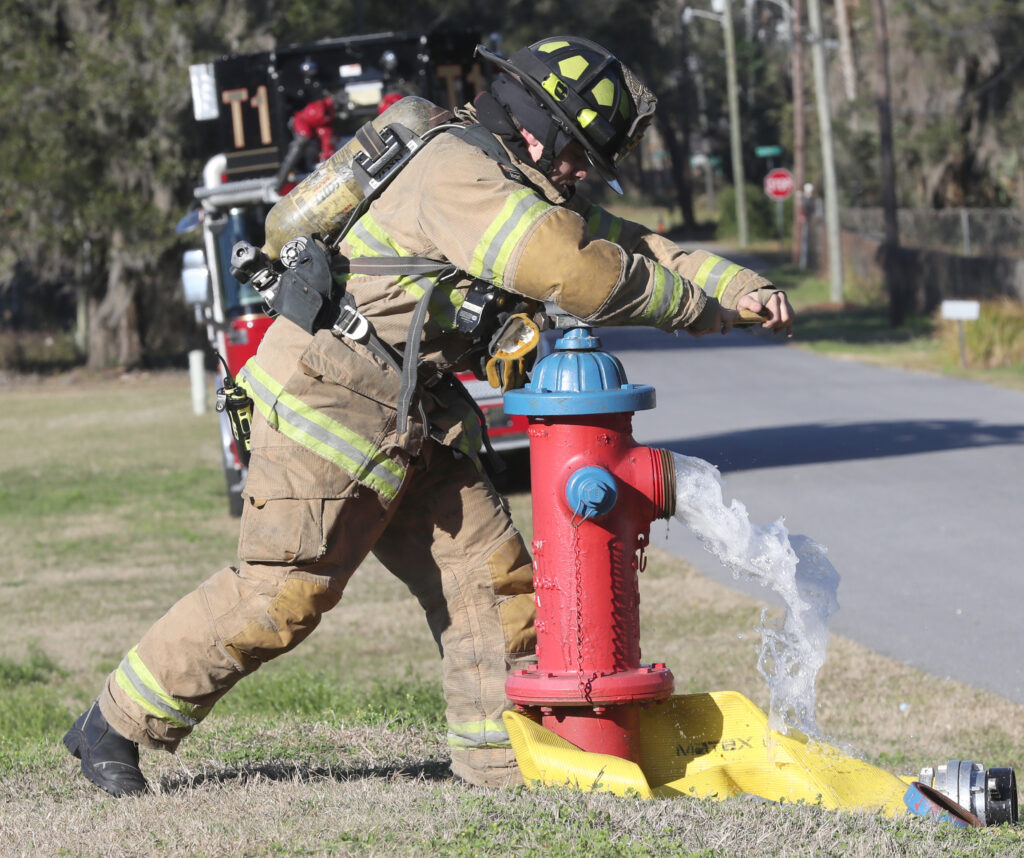 Derek Martin, a firefighter/EMT with Ocala Fire Rescue Station 1, opens a hydrant during a training drill on Feb. 2. The city was sued this week over the method it recently adopted to pay for fire services. [Bruce Ackerman/Ocala Gazette]

The city of Ocala faces another lawsuit over how it wants to pay for fire services.

On the heels of the city passing a special assessment to help fund Ocala Fire Rescue services, a local apartment complex this week filed a lawsuit in Marion County Circuit Court claiming the assessment was unlawful.

It is the second time the city’s method of collecting funds for fire services has come under challenge. In 2014, a lawsuit challenged a fire fee the city bundled into the monthly utility bills of all city customers. In 2020, an appeals court deemed that fee an illegal tax. Now, the city is faced with the prospect of having to pay back upwards of $80 million in refunds. The new fire assessment was meant to replace the now defunct fire fee.

In the latest action, Carlton Arms of Ocala is asking for a permanent injunction against the new plan calling it an unreasonable action that unfairly charges multi-family properties like Carlton Arms.

The suit was filed by Tampa-based attorney Robert Kelley on behalf of the 860-unit apartment complex at 5001 SW 20th St.

Under the plan, Carlton Arms would have to pay more than $164,000 in assessments this year: $190.77 for the period covering February through September multiplied by 860 units.

That could swell to more than $246,000 for a full year’s assessment. By comparison, the assessment cap for non-residential properties is $47,000.

“The cost of service in not comparable with the type of use,” said Fred Roberts, an attorney representing Carlton Arms during the Jan. 19 city council meeting.

He said the assessment would increase the apartment complex’s raw tax burden by 28%.

Robert also noted that other similar properties including some hotels and motels are not charged residential rates even though they technically fit the definition of residential properties in the assessment’s underlying ordinance.

“It’s a disproportionate apportionment,” he said.

The suit also points out that the ordinance uses the Florida Department of Revenue’s protocol for ad valorem tax roll preparation, despite the assessment being a non-ad valorem assessment. Ad valorem taxes are paid based on property value.

At the Feb. 2 City Council meeting, Rob Batsel, the city’s attorney, warned the council that the suit could be coming telling them he was confident the ordinance would pass legal muster and not to worry.

This week, he reiterated that belief.

“Our fire assessment was passed appropriately. It meets the legal test,” he said, adding that the city is looking at ways to make the assessment even fairer.

At the Feb. 2 meeting, Batsel also asked the council members to immediately start a review of the assessment and way that it could be refined, including assessing vacant land or creating subcategories under the two main categories.

The council agreed to move forward with the review.