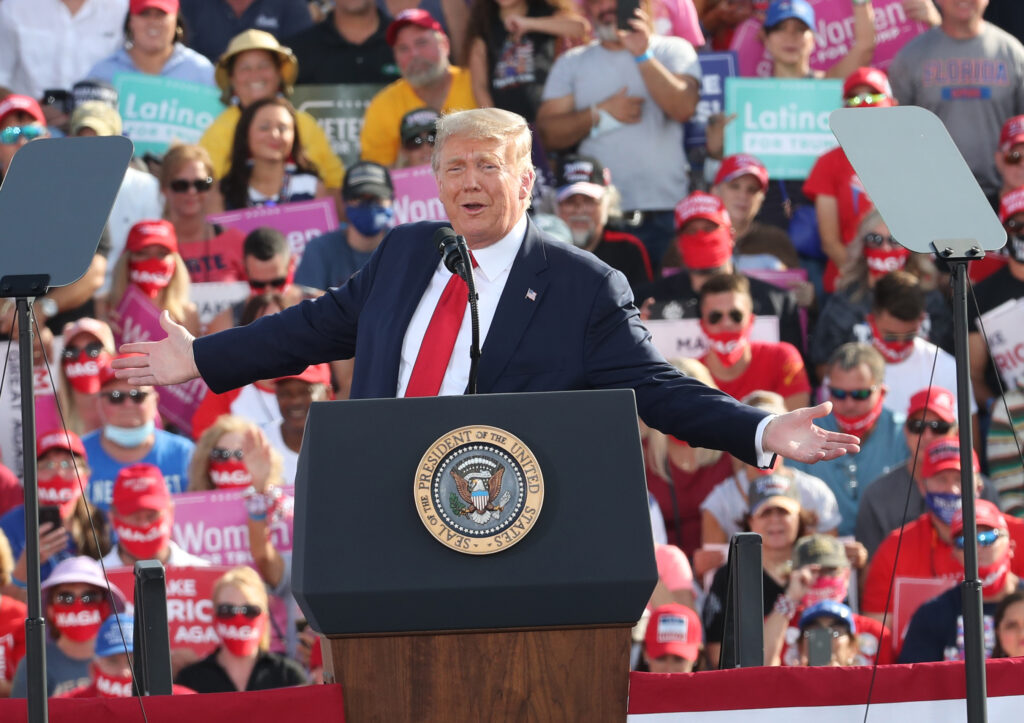 Thousands of President Donald Trump’s loyalists descended on Ocala’s airport on Friday to hear him dish out some red-meat rhetoric.

In an often meandering but still energetic speech, the 74-year-old president displayed no after effects of his recent bout with COVID-19. He spent nearly two hours on a hot fall afternoon attacking his Democratic rival and the media, pumping up his record, and promising supporters, as is his trademark, to make America great again if given another four years in the White House.

Surrounded by a sea of boisterous, mostly red-clad adorers, Trump took shots at Democratic nominee Joe Biden and warned of dark days ahead should the voters reject a second term for the incumbent.

The president also went after Biden obliquely, dredging up recent scandals that have engulfed the former vice president’s son, Hunter.

The New York Post has recently reported on emails that allegedly showed Joe Biden misled the public with denials that he was unaware of Hunter Biden’s dealings in Ukraine, and that Hunter Biden also stood ready to accept $10 million a year for consulting services from the communist Chinese government. The emails reportedly came from a laptop that once belonged to Hunter Biden, although that has not been verified, and the FBI is investigating the veracity of the claims, which were made by Trump confidante Rudy Giuliani.

The Biden campaign has criticized the revelations as “disinformation.”

On Friday, however, Trump seized the reports as a cudgel to hammer Biden and rally the faithful.

He referred to the Bidens as a “corrupt family,” and labeled Joe Biden specifically as the “living embodiment of the corrupt political class,” and the lackey of “globalists who got rich bleeding America dry.”

“As soon as his father became vice president, he became a vacuum cleaner for the family,” Trump said of Hunter Biden.

The media was also a frequent target. On a few occasion Trump’s comments caused the crowd closest to him to deliver jeers to the press gallery.

He accused the “left-wing media” of stifling his accomplishments, while highlighting negative news. He also criticized “Big Tech censors” for being complicit by masking bad news about Democrats on social media.

At one point, as the crowd chanted “four more years,” the president said of the media, “Why don’t you drive them crazy and say 12 more years?”

Trump touted his record on the economy, foreign policy and the handling of the COVID-19 pandemic.

At several points, for example, he cited the pre-pandemic economic statistics to claim ownership of the “greatest economy” America has ever seen – one that raised the economic fortunes of all demographic groups.

Trump spotlighted his enactment of the Right to Try Act, which gives the terminally ill an opportunity to try drugs not yet sanctioned by the Food and Drug Administration.

He trumpeted the defeat of ISIS and the smashing of its caliphate, as well as the killing of Iranian Gen. Qasem Soleimani, who U.S. intelligence has said is responsible for the deaths of hundreds of American soldiers fighting in Iraq. And he observed that he has received three Nobel Peace Prize nominations for brokering peace agreements between Israel and some of its Arab neighbors. 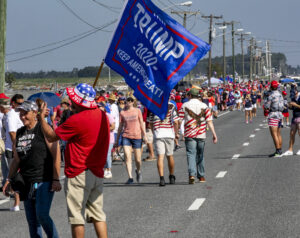 A line of Donald Trump supporters stretches more than a half mile down Southwest 60th Avenue for the president’s arrival at Ocala International Airport on Friday. [Alan Youngblood/special to the Ocala Gazette]

Moreover, Trump claimed credit for saving “millions” of lives from COVID-19, a reference to early pandemic models that indicated as many as 2 million Americans would die from the virus. He discussed his administration’s efforts to distribute personal protective gear and tear down regulatory barriers for a potential vaccine, 100 million doses of which could be ready by year’s end, and therapeutics.

He also drew robust applause for several mentions of Judge Amy Coney Barrett, who is expected to be confirmed to the Supreme Court before the Nov. 3 election.

But he then urged the crowd to turn out to the polls, saying he could build on the success of the last four years.

He criticized liberals who denounce school choice but send their children to private schools, who seek to dismantle police departments from the safety of gated communities and who criticize the Second Amendment while hiring private security.

To a standing ovation, Trump pledged to uphold the Second Amendment, free speech, and religious liberty. He also vowed that children would be taught “to respect our country and honor our history and our great American flag.” 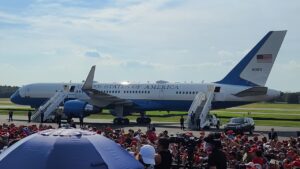 “I was elected to fight for you,” the president said. “It’s time to send a message to those wealthy liberal hypocrites in Washington, D.C., and Silicon Valley.

“We made America into the single greatest nation in the history of the world and the best is yet to come,” he concluded. “We are one nation, one people, one family and one glorious nation under God – and we will make America great again.”