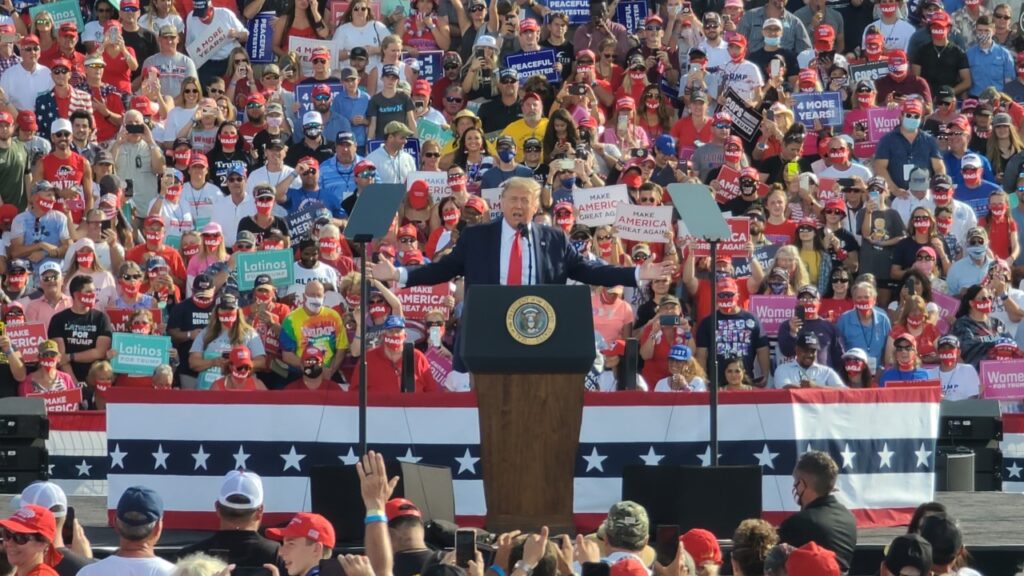 The president wraps up his remarks and leaves the stage to The Village People’s “YMCA.”

Trump on COVID: “I don’t know what the hell they gave me, but I’ll take some more.”

On running for president: “It cost me billions, but it’s the greatest investment I ever made because it was an investment in our country.”

“As soon as his father became vice president, (Hunter) became a vacuum for the family,” he said.

Trump said Biden and the Democrats want to replace the American dream with the socialist nightmare.

“They’re addicted to power, and God help us if they ever get it,” the president said.

“It’s time to send a message to the wealthy liberal hypocrites in Washington, D.C.  and Silicon Valley,” he added.

The president comes to the stage to Survivor’s “Eye of the Tiger.” 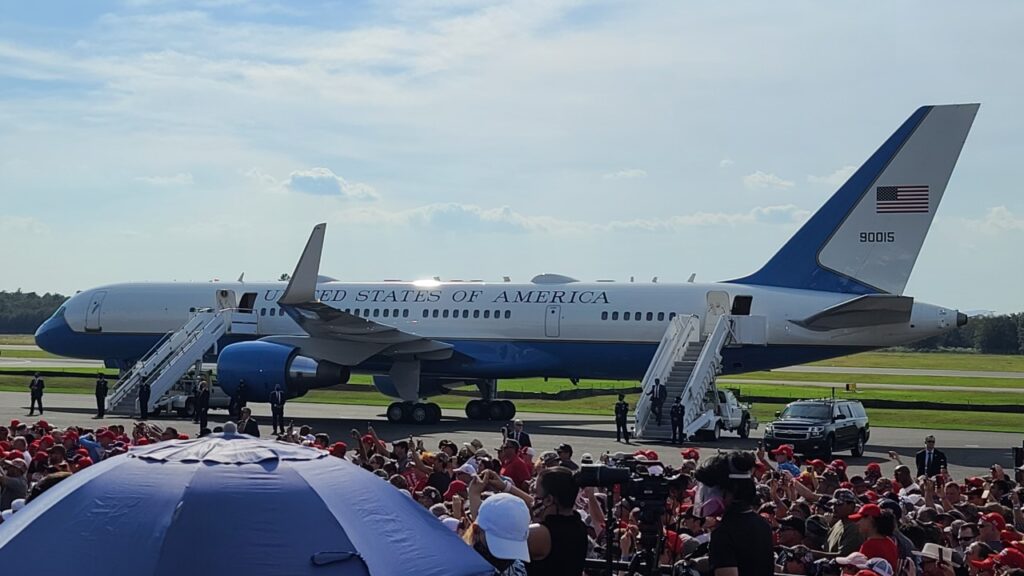 Air Force One lands as The Village People’s 1978 classic, “Macho Man,” blares from the speakers at Ocala International Airport

“No president has supported the military more than Donald J. Trump,” he said, “and that’s why we’ve got to give him four more years.

“I’ll be damned,” Waltz added, “if I’m going to live in a country run by Democratic socialists or a world run by Chinese communists.” 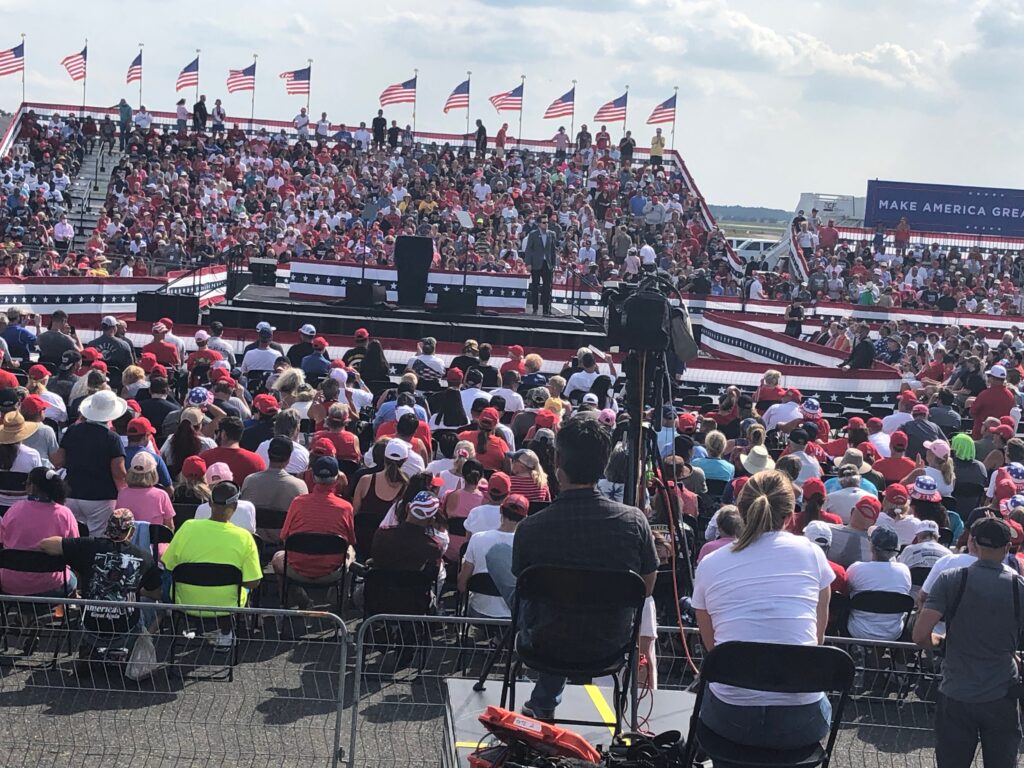 A number of Republican officeholders and candidates are taking to the stage to warm up the crowd ahead of Donald Trump’s arrival.

Rep. Matt Gaetz, a stalwart Trump supporter during the president’s four years, is drawing loud cheers for his support of Trump policies and attacks on Democrats.

And in a nod to Ocala’s reputation as “Horse Capital of the World,” Gaetz said, “You all are from horse country. Donald J. Trump is a thoroughbred, and it’s time to put Joe Biden out to pasture.”

Kat Cammack, who is running for the 3rd Congressional District, spoke before Gaetz. As she finished, the crowd broke into spontaneous chants of, “CNN sucks,” “Lock her up,” and “Four more years.”

Trump is expected to fly into Ocala International Airport this afternoon to greet supporters in a region of Florida considered key to winning the state.

Trump Campaign officials had no projections for the turnout, but local law enforcement assisting the Secret Service with security are expecting a huge crowd for the rally, the second the president has held this week in Florida. He was in Sanford on Monday.

The event is being staged on the tarmac behind the airport terminal. 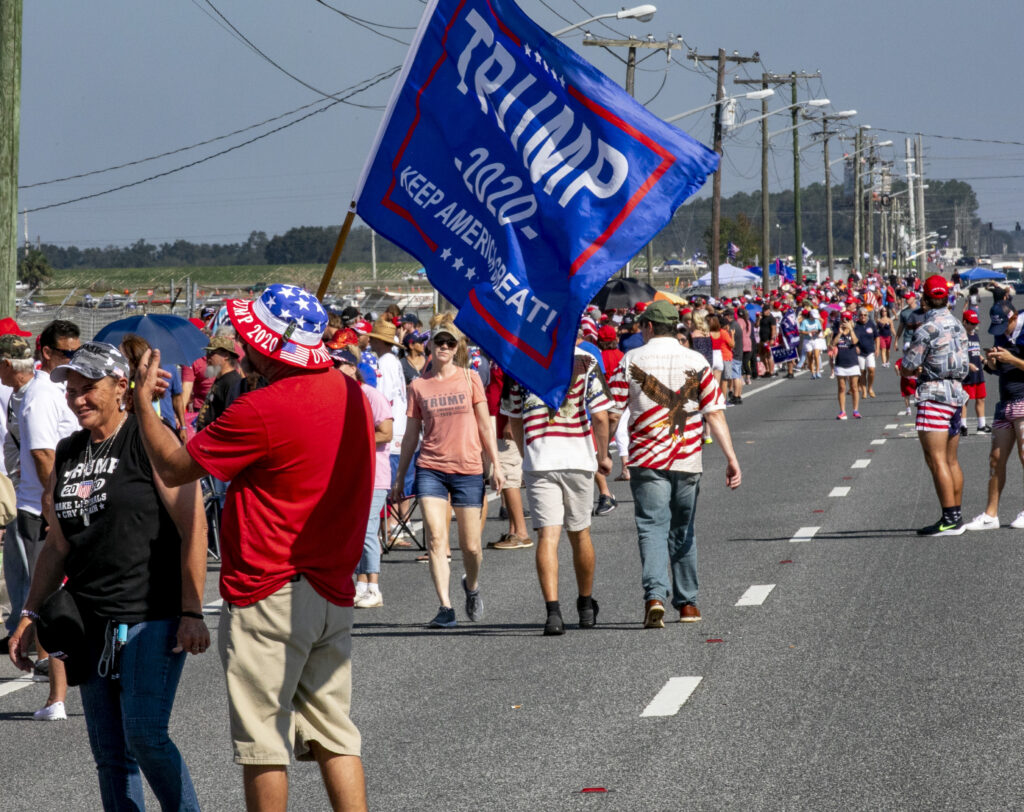 Donald Trump supporters get on line early. The line stretched half mile down Southwest 60th Ave for the Presidents arrival Ocala International Airport on Friday October 16, 2020. [Alan Youngblood/special to the Ocala Gazette)

By 1 p.m. Friday – three hours before Trump was scheduled to speak – thousands of people were streaming down Southwest 60th Avenue from the designated parking area near State Road 40.

As expected, the crowd was ablaze with red Trump shirts, MAGA hats, Trump 2020 signs and American flags. One man sported an olive drab T-shirt emblazoned with “Socialism Distancing” and another shirt bore the message “Defend the Police.”

“He’s the man. I’m tired of seeing this country get sh** on, and he’s making this country better,” said Bob Sihler, who drove up from Venice in South Florida for the event.

Added his girlfriend, “And we would have gone a lot further.”

Trump supporter James Hipp didn’t come quite as far – Leesburg. He said there are “innumerable reasons” the president should be reelected, without specifying. In the end, he said, he supports the president because “Trump really cares.”