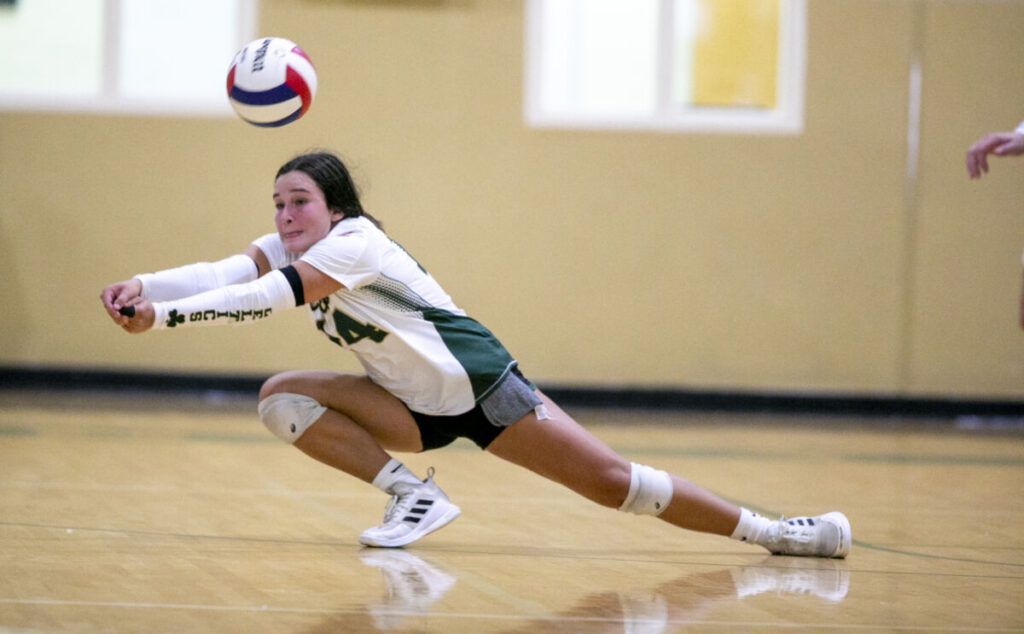 Playing a tough regular season schedule to determine his team’s strengths and weaknesses is something that veteran Trinity Catholic volleyball coach Jeff Reavis believes in.

Santa Fe showed why there is a definite possibility the talented Raiders could earn back-to-back state championships after they swept past the Celtics by scores of 25-15, 25-22 and 25-18.

“Our serve-receive was not where we need it to be to win a state championship,” said fifth-year Santa Fe coach Eric Marshall. “We have all but two girls back from last year and our goal is to win the state championship again 100 percent.”

For Trinity Catholic, which lost in the Class 3A state semifinals last year, and won state titles in 2018 and 2020, it was a sobering way to start the season.

“We have more things to learn obviously,” coach Reavis said. “We’re not going to make excuses or anything like that, but that’s a very good team we played. Santa Fe is always very competitive and we usually do a good job of competing with them, but we didn’t do that tonight.”

Santa Fe came out firing on all cylinders to start the match as senior hitter Jalyn Stout, a Coastal Carolina commit, had four of her match-high 21 kills as the Raiders stormed out to a commanding 16-8 lead.

Trinity Catholic couldn’t string any points together against the athletic Santa Fe front line and the Raiders eased to the 25-15 win in the first set.

The second set was close throughout as Trinity Catholic led 8-4 and 17-16 before Santa Fe rallied behind the strong net play of 6-foot 2 junior middle hitter Joselynn Sanjurjo, who had four of her 11 kills as the Raiders pulled away for the 25-22 win.

The close loss seemed to deflate Trinity Catholic, while Santa Fe rode the momentum and jumped out to a 12-4 lead in the third and final set.

Trinity Catholic tried to rally as senior Kiana Laborde had three of her team-high 10 kills and Ameila Fitzpatrick chipped in with several of her 14 assists to pull the Celtics within 20-16.

Santa Fe called a time out and reestablished its dominance at the net as Stout and Sanjurjo took turns blasting spikes past the Trinity Catholic defenders.

Appropriately enough, it was the left-handed Stout, who was the 2021 Florida Dairy Farmers Miss Volleyball, which is the state’s Player of the Year award across all classifications, who drilled a vicious cross-court spike on match point to seal the win for the Raiders.

“Jalyn is our captain and a team leader,” coach Marshall said. “I expect her to win that award again, but we have to get other people involved because you can’t expect her to take 39 swings every match. Our middle had a good night, but our outside hitters have to get kills and they did not do that tonight.”

Trinity Catholic will regroup and prepare for Thursday night’s home match against Vanguard.

“We scheduled this game for a reason to find out where we are,” coach Reavis said. “We’re just a little further away than we had hoped and it’s a learning experience. I told the girls to walk out of the locker room with your head held high, look people in the eyes and own this. We’ll work on some things in practice and get ready to play a good Vanguard team on Thursday.”